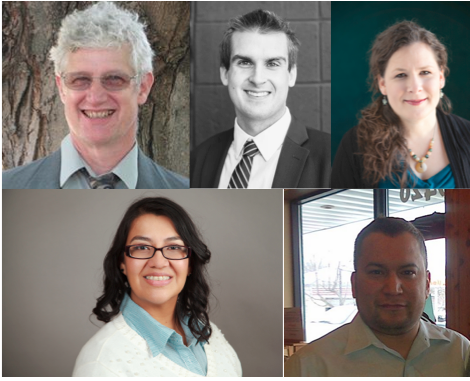 Is “education debt” a more accurate description than “achievement gap?”

This was one of the early questions in the April 12 Minneapolis school board candidate forum put on by Neighborhoods Organizing for Change (NOC). The forum is one of several being held before the  April 26 DFL Convention, when delegates may or may not choose to endorse school board candidates.

The forum was held at Shiloh Temple, across the street from the Minneapolis Public Schools’ Davis Center headquarters, and it attracted approximately fifty neighbors, NOC members, and interested citizens.

A key race this year is for two citywide at-large seats, and all five declared candidates for these two spots were present. They included incumbent Rebecca Gagnon, who has been on the board since 2010; Doug Mann, who is making his ninth run for a spot on the board; and newcomers Iris Altamarino, Ira Jourdain, and Andrew Minck.

Also present was Nelson Inz, who is running against Jay Larson for the District Five seat in south Minneapolis. District One incumbent Jenny Arneson, who is running unopposed for her seat, was not able to make the forum; Said Ali, running in District Three, was also not there.

The forum was moderated by high school student and NOC member Jerica Gillespie, who worked to keep candidates’ answers succinct and on topic. When Gillespie finished, audience members also had a chance to ask questions.

The first question asked the candidates how they would define the term “achievement gap,” and Gagnon said she would reframe it the way African American educator Gloria Ladson-Billings has, as an “education debt.” Gagnon said she felt the term achievement gap implied that children are responsible for catching up to another group of students.

Inz built upon Gagnon’s distinction and said it is important to consider how the “achievement gap” is being measured. What if, he said, students in Minneapolis were measured according to whether or not they were bilingual instead of only according to test scores?

Jourdain also said he prefers the term “education debt,” saying he feels there are a lot of outside factors that negatively affect impoverished children, and that teachers should be given a “louder, stronger voice” in developing creative solutions to educational disparities.

Mann said he did not quite understand what “education debt” was implying, and said he preferred the term “access gap.” He also mentioned the outside factors, such as housing, that he believes affect student achievement.

Minck did not offer a different term for “achievement gap,” but did say “language matters,” and that “implicit biases” should not be part of commonly used terms. Minck also stressed that all stakeholders must have “high expectations” for students.

Altamarino did not back away from using the “achievement gap” as a term and said it is “not a new phenomenon.” She declared herself to be someone who comes from a “marginalized community,” and also said she is one who “beat the odds” by going to Cornell University.

The theme of race, personal experiences, and the realities of working within a big district like Minneapolis defined the forum. Minck, who taught for two years through Teach for America and is currently employed by that organization, continued to stress the need for “high expectations for all students,” and also mentioned his desire to apply a “sense of urgency” to what he said was a 54 percent graduation rate for the Minneapolis Public Schools.

All candidates agreed that diversifying Minneapolis’ teaching force should happen, with both Mann and Jourdain questioning the district’s hiring practices. Jourdain, whose roots are on the Red Lake Indian Reservation, spoke about a joint Bemidji State/Augsburg College program that helps American Indian students earn teaching licenses. The Minneapolis Public Schools, Jourdain said, had hired not one of this program’s graduates. Inz, however, said “we can’t expect diverse staff members to solve problems of endemic racism.”

On the topic of combating racism and student disengagement through culturally responsive teaching, Gagnon said she thought offering a “diverse curriculum, with student choice allowed” was important.

Altamarino echoed this by describing her own experience as a student, when a La Raza member at the University of Minnesota introduced her to the alternative history book Occupied America. Today, we are so focused on standards, she said, that “teachers don’t have time to be flexible.” Inz also mentioned his work as a history teacher, where he says culturally relevant class lessons and field trips helps expand students’ “sense of the world.”

Candidates also touched on how to reduce suspension rates, particularly for African American students. Minck said it would be important to “end all zero tolerance policies” in the district, and “break down implicit bias” in student, teacher, and administrator relationships. Jourdain spoke of his belief in a restorative justice approach, while Altamarino said further training and emotional and social support for teachers and students would be helpful.

There will be another candidate forum hosted by the Coalition for Quality Schools on April 17, from 5:30-7:30, at Sabathani Community Center in south Minneapolis. Current school board member Tracine Asberry is also hosting a candidate forum on April 24 at Dr. Martin Luther King Jr. Park in Minneapolis.