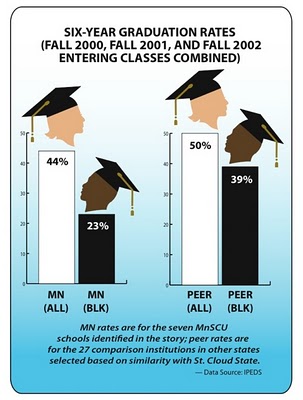 Six-year graduation rates for the Fall 2000, Fall 2001, and Fall 2002 entering classes combined. MN rates are for the seven MnSCU schools identified in the story; peer rates are for the 27 comparison institutions in other states selected based on similarity with St. Cloud State. Data source: IPEDS

Minnesota’s Black-White achievement gap extends well beyond the state’s high schools into its post-secondary schools, a 2010 report shows. The combined graduation rates after six years of college at seven Minnesota State Colleges and Universities (MnSCU) for Black students who entered as freshmen in 2000, 2001 and 2002 was on average 22 percent behind their White peers. The report “opens up the door for a ton of questions,” says Minnesota Minority Education Partnership (MMEP) Executive Director Carlos Mariani.

Asked what could account for this persistent gap, Mariani says, “Frankly, I think it raises the same kind of questions that we are asking in K-12: What are the specific strategies that each one of the institutions is using, tailored to respond to the needs of those communities [of color]?”

Since 2001, MMEP annually reports on the academic progress of Blacks and other students of color in Minnesota from early childhood programming to high school and post-secondary institutions. (The graduation rates report referred to above was issued by St. Cloud State and is not an MMEP report).

“We consistently try in our reports over the years [to point out] that there is a difference in post-secondary education between students of color graduation rates and White students’. The issues around the disparity gap don’t stop at 12th grade.”

“The [MnSCU] system is not satisfied with those numbers,” admits Interim Vice Chancellor for Academic and Student Affairs Scott Olson. St. Cloud State Assistant Vice President Loren Boone adds, “The retention and graduation of all of our students is of a great deal of importance to us, particularly students of color.”

MnSCU Public Relations Director Melinda Voss says that the graduation data is from information supplied by the individual schools to the National Center for Education Statistics. However, she believes it can be misleading.

Olson continues, “If a student started and did two years in our system, and they wanted to be an architect, we don’t have a single architectural program in our system. So if they completed two years at one of our institutions and then transferred to the [University of Minnesota] and got their architectural degree, they’d have achieved their dream…”

While including transferred students in the data might raise overall graduation rates, it is unclear how doing so would affect the large graduation-rate gaps between Black and White students in all of these institutions.

Although the report uses eight-year-old data (MnSCU has not yet released more recent rates), “I would be willing to guess that those numbers haven’t moved a whole lot,” Mariani surmises. “The six-year graduation rates are pretty poor” for Whites, but “it’s exaggerated for students of color.” 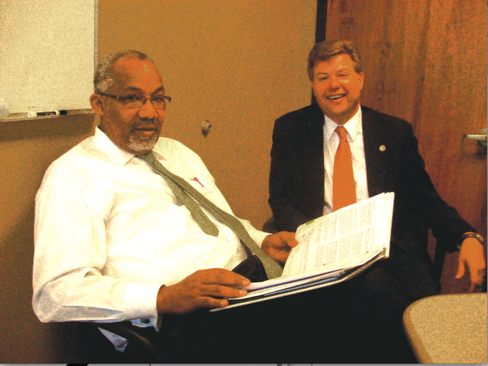 “The goal is to not only improve access, but also to improve retention and success,” Harris says. “The programs are focused on our underrepresented students, but many students take part in these programs.”

“Learning communities” have been established at Metropolitan State, according to Olson. “We are encouraging that throughout the system. It puts students in cohorts in several courses together, or at universities it often means [students of color] are on the same floor of the residence hall together,” explains Olson. “They begin to form a community within the community.”

Mankato also has “first-year experience” courses for students to take during their first semester “to develop college-level study skills,” continues Olson. “Those programs are really dedicated to helping students feel like they are ready to be college students,” he explains, adding that “intrusive advising,” which connects students with academic advisors throughout their time in school, is utilized as well.

Boone says SCSU has instituted several summer pre-college programs “that really get students of color off on the right foot in terms of getting prepared for college. We have lots of those types of programs, because we understand and know that the success of all of our students is important.”

The report also compared six-year graduation rates for Blacks at universities in other parts of the country with student populations similar to those at St. Cloud State and Mankato. Towson (Maryland) University and Texas State University-San Marcos both posted higher graduation rates for their Black students than for their overall student populations.

“There are a number of schools all over the country that have gotten really good at working with diverse students, low income, and kids of color,” says Mariani. “There is a whole body of evidence out there on how to do that.”

He strongly suggests that crucial components to ensuring this success are “strong support services that are multi-culturally competent, and a multi-cultural staff.” Mariani believes that “MnSCU is learning how to do that now, but I would say they still have a long way to go.”

“It is a number-one concern that we seek to create a diverse workforce [at MnSCU institutions],” Harris says.

The presidents at MnSCU institutions “are being evaluated on how well they are raising completion rates for everyone,” notes Voss. “The [MnSCU] board is really committed to making these improvements.”

St. Cloud State President Earl Potter says he has no problem being held accountable by both the MnSCU board and the public for ensuring that every student who attends his school graduates. “When you turn the lights on, you’ll see things that are surprising. That motivates change.”

Potter believes the St. Cloud State campus “feels different” for Black students than has been the case in the past. “They are more engaged in campus student organizations and are more likely to say that they have good relations with faculty than our White majority [students].” He also cited pre-college programs specially designed for incoming Blacks and other students of color “to offer opportunities for exposure early and get support as they come into the university.”

The SCSU president admits that “intervention systems that recognize the vulnerability of our students of color” are also needed to ensure their success toward earning their degrees.

Enrollment numbers for Blacks and other students of color at MnSCU schools have been on the rise since 2001. Voss says that Black retention rates from their first year in school to their second and beyond have also increased system-wide from nearly 67 percent in 2003 to over 70 percent in 2008.

MnSCU officials pledge that all graduation rates will improve, especially among Black students. “I think we’ve made some progress, but we still have a lot of work to do, and we are working very hard,” says Harris.

Olson agrees: “We need to do better.”