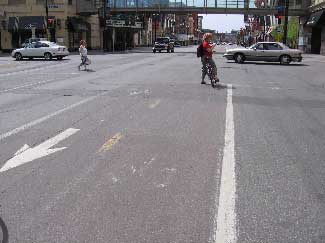 I was nearly killed last week while bicycling in the designated bicycle lane last week. A motorist turned into the bike lane at high speed. We both avoided colision by a few yards, but the encounter could have been deadly.

I have encountered cars in that bike lane two other times this year alone. It isn’t surprisig that motorists are confused, because the painted markings are barely visible and desperately need to be re-painted.

I have contacted the the city about this matter and have not received a reply.