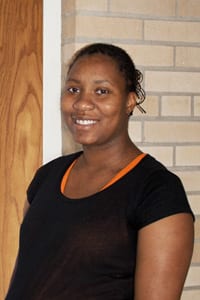 Her apprenticeship may have ended, but the skills Anisha Sapho gained as an apprentice with the Broadband Access Project have opened a whole new world of possibilities.

Anisha Sapho didn’t know much about the Broadband Access Project (BAP), or even computers, when she attended the grand opening of the University of Minnesota Urban Research and Outreach-Engagement Center (UROC) in the summer of 2010. But she went anyway on the advice of Wilson Maceno, who thought there might be some interesting job opportunities for her with BAP, a $3.6-million UROC initiative to make broadband access and computer skills more accessible to underserved urban communities.

Maceno, who is currently a technology manager with the University’s Office of Business and Community Economic Development (OBCED) computer refurbishing program, was right. And Sapho wasn’t surprised. He has been helping her find employment and gain meaningful work experience since she worked for him at Domino’s Pizza when she was 18. “Wilson was my manager back then and he’s been my mentor and networking person ever since,” says Sapho, who graduated from St. Louis Park High School in 2004.

Since then, the young mother of two boys (ages 4 and 1) has often worked as many as three jobs to make ends meet. She credits her own hard-working, single mom, Anita Burns, for “teaching me how to take care of myself.” Fast-food, retail, call centers, Sapho has done many different types of work, but nothing that involved computers until she got a job last June as an apprentice with BAP.

As part of her BAP training Sapho received extensive training in everything from how to use and maintain computers to how to do effective employment searches. Now, she’s not only comfortable with using computers and the Internet, she’s planning to pursue career options for which an understanding of technology is essential. “I’m much more interested in what I can do with a computer now, and I may go back to school to study business administration, which is my big passion,” she explains.

Just call her the outreach guru

Sapho was one of 10 apprentices hired to staff BAP computer labs at 11 community-based sites in four federally designated poverty zones in Minneapolis and St. Paul. Funded in part by a $2.9-million stimulus-related grant from the federal Broadband Technology Opportunities Program, BAP is also supported by $741,000 in matching funds from the University and community partners.

After finishing her training, Sapho began her 15-month appointment at the Church of St. Philip in North Minneapolis. It was slow going at first because the project was just getting off the ground. First, she worked with Kids’ Club after-school program, as well as College Bound, a youth program for teenagers 17 and older who were thinking of going to college. “I taught them how to use computers to do their homework and for research, and they were really exited about the different skills they learned,” she says. After a while, Sapho got so good at spreading the word about the lab and getting people to come in, someone nicknamed her “the outreach guru.”

After that, outreach became her niche, Sapho says. Since moving on from the Church of St. Philip lab, which has since been close by the archdiocese, she has apprenticed at other Minneapolis BAP labs, including Sabathani Community Center, Project for Pride in Living (PPL) and most recently Patchwork Quilt. At every lab, she made getting people in the door her goal. Outreach was particularly challenging at PPL, which is designed to serve residents of PPL’s Near North apartments only. “A lot of kids came through the door but not many adults,” Sapho recalls. “We had to get creative, so I planned an open house and I made a lot of fliers, so that brought in a few more residents who told others to come.”

Most people come to the labs because they need to find work and they want help learning how to use to a computer and the Internet to do that. While some never say much about themselves, others opened up once they got to know Sapho. Many say they’re afraid of computers because they never learned to use one and now it almost seems like it’s “too late.”

Sapho quickly eased their fears by explaining how, in a very short time, she went from feeling apprehensive about technology to using it to create fliers, edit photos, and connect with friends and family. “I helped make my brother’s birth announcement for his daughter and everybody liked it,” she says. “My mom was really happy that I learned how to do that kind of thing.”

As a kid, Sapho and her three siblings got used to moving around a lot so the family could be close to mom’s work. Edina, St. Louis Park, Eden Prairie, and Brooklyn Park were all home at one time or another. Since 2000, though, Sapho has lived in North Minneapolis.

Recently, she and her two sons moved in to a Project for Pride in Living apartment just in time for the arrival of a baby girl, due in November.

“I made the apartment connection through BAP, so that’s been really great,” she says.

As a working mom living in the same neighborhood where she works, Sapho understands the obstacles people in the community face when trying to use computers and access the Internet. “People can’t afford computers at home, and they don’t have time to get on the bus to go to the library to try to get on a computer,” she says. “Even if they could go to the library, those computers have time limits—and what will they do with their kids while they’re trying to work on something?”

At the BAP labs, while Sapho helped parents create resumes or use the Internet to find housing or employment, kids spent time using computers to watch educational programs, do homework or even play games as long as there is some kind of educational component to it. “We understood that parents needed a little peace and quiet to do the things they needed to do or to learn a new skill, so we tried to get their kids busy learning something too,” she says.

Though Sapho’s BAP apprenticeship ended in late September and a new group of apprentices has arrived, she will continue working at Patchwork Quilt as an employee working with kids in their youth program.

“I’ll take some time off after the baby, but then I’ll come back here to work,” she says. “It’ll be busy, but I want my kids to know it’s important to help others. It’s not always about you.”