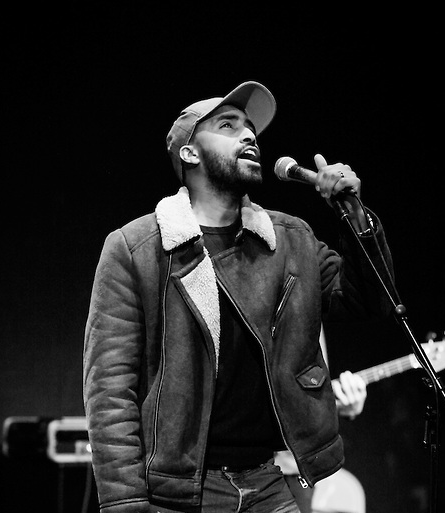 “Somalia was always known as the nation of poets,” Aar Maanta said to the small audience at the West Bank’s People’s Center, during a relaxed Q&A session. An afternoon “mini-performance” and discussion was attended by mostly Augsburg students & faculty, as part of Aar Maanta’s week-long residency in Minneapolis, a joint effort hosted by Augsburg College and the Cedar as part of their longer Midnimo series. Aar Maanta promised to play an additional song if the audience danced, and by the last song of the lunchtime concert, the majority of them were on their feet and dancing.

Aar Maanta was kind enough to take some time in his busy week to sit with me and share some conversation about racial profiling, being an artist, and his role in facilitating conversations between communities of the Somali diaspora and the other communities around them.

Corina Bernstein: Can you talk about your artistic inspirations? Are there artists who are influencing your work right now?

Aar Maanta: Originally there was a band called Waaberi, the Somali word for “dawn”. And also Iftim, it means “the light”, and they were the Ministry of Education’s band. It was a blessing, but also it was a curse, because all of the Somali bands were government-funded. So every ministry or organization used to have a band, basically. So for example, the military band was called “Halgan”. That meant “strife” or “struggle”, so this is all that deep kind of rooted ideology.

The main band, Waaberi, were the most popular, and they had about 5,000 staff- they had musicians, they had composers, sound people, and they were like a theater group as well. So they used to travel, and every season they used to have a play. And all the plays had to be done in poetic dialogue. It had to be poetic… So I’m learning that stuff now.

CB: I read a media source doing research about you that called you the “voice of the Somali diaspora”. I’m interested in how you feel about that, I can imagine being representative of all things Somali can be difficult in some ways?

AM: I don’t really see myself as a spokesman of any causes or any particular community or even in general the Somali community, really, it’s too big of a burden. But at the same time, that quote is really… it encouraged me to do more, to find my own niche, my own sound. And also, to talk about specific things. That’s when it kind of dawned on me that I need to be talking about… the specific struggles of Somalis in the diaspora. That’s when it really hit me, you know, it’s good to be a singer, but at the same time, it’s good to be a singer that actually stands for something.

CB: I understand 2012 was the last time you were in Minnesota, and you had some pretty serious issues at the airport?

AM: Initially, my visit was delayed, but members of my band who are not Somali, their visas were approved automatically. The fact that it was delayed caused my first show to be rescheduled. So instead of coming in September, we came in January.

We arrived, and really the entry process for me just seemed a lot longer, even though I’m there with my instruments and members of my band with their instruments, they can see we’re playing together. But just because of my name, and my ethnicity is Somali, my faith is Islam, because of that, I was in, in my opinion, profiled. And I know the guys at the airport are not picking on me, but I feel like they were given orders to do this by the higher powers, so I’ve learned to deal with this kind of situation, and to be patient with people who are doing their job at airports.

And I think that patience paid off this time when I was coming because the same man by chance came to me and he’s like “I’ve seen you before,” then checked the system. “You were here in 2012- oh you’re fine now.” (laughing) So this time, this time it worked you know.

CB: And you have a British passport?

CB: I can’t imagine how frustrating that is.

AM: What’s actually more frustrating is, that I get treated like that, maybe even worse, in the U.K. When I go back to the UK, they are like “Where did you go? What did you do? You’re a musician, okay, why did you go there? When was the last time you’ve been back to Somalia?” “I haven’t been back to Somalia.” “Are you sure?” all this kind of stuff. I actually made a video about it. Just really reenacting it. I found really good actors who are able to act exactly how it was, it was like they knew, we didn’t have to tell them. Yeah, so that was the situation.

CB: Can you talk a little bit about making the video for Deeqa? It was powerful to me, some of the camera angles made me really feel your position viscerally. I felt it was a strong piece of art to bring you into your experience.

AM: I was lucky enough to work with a filmmaker, a friend of mine who’s really talented, his name is Ahmed Farah. He’s based in Kenya now, and he likes these kinds of ideas. I told him listen, I don’t want to be just a singer, I want to do stories that I relate to, or experience from people around me, things that happen to them. And I want to marry that music with film because I am really also interested in film and directing and all that kind of stuff. So we did that, and it came out really very realistic. So much so, that some friends of my mother, who are not familiar with the artistic side of me, saw it, and they actually thought it was news, and this actually happened to me. So they were calling my mother (laughing) saying “Your son has been arrested, he’s being interrogated!”

CB: So on a purely personal level, you’ve talked a lot about your identity as a Somali person in diaspora. Could you talk about what that means to you, to have that identity, to be coming to create these bridges in these various communities all over the world?

AM: To me, being a Somali is a blessing because there’s so much richness artistically. And I say it’s a blessing because most of us don’t actually realize how rich our heritage and our culture is. And the fact that there aren’t many of us that realize it and explore it, makes me a lucky person. That’s why I say it’s a blessing, the fact that I am able to do that. And I have a lot of ideas, and there’s always just so much to be done. Also saying blessing also means that not much has been done to tell that story, so that I am able to do that is really an honor.