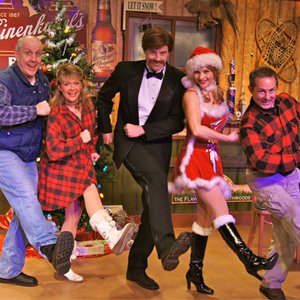 A Don’t Hug Me Christmas Carol, currently playing at the New Century Theatre in Minneapolis, is another opportunity for Minnesotans to laugh at themselves—something we seem to be very good at.

A Don’t Hug Me Christmas Carol tells the story of Gunner, a down-on-his-luck bar owner in northern Minnesota who can no longer find joy in life or love in his marriage. On Christmas Eve he takes his snowmobile out on the lake and falls through the ice. While in a coma in the hospital he is given the chance to observe his life with the help of visits from the Ghosts of Christmas Past, Christmas Present and Christmas Yet To Come. Unfortunately for Gunner the ghosts are all embodied by Sven (budget cuts in the ghost world!), his old band partner and love rival.

The five actors in A Don’t Hug Me Christmas Carol are all veterans of musical theater in the Twin Cities and this production is a great showcase for their musical and comedic talents. Bonni Allen, Doug Anderson, Michael Lee, Jennifer Maren and Ross Young are each able to bring their character’s distinct idiosyncrasies to life to such a degree that this over-the-top story of Christmas redemption seems totally natural. In particular I enjoyed Michael Lee’s portrayal of the Christmas ghosts in his Robert Goulet persona and Jennifer Maren’s appearance as Tiny Tim.

Even though we all know how this story is going to end, I have never seen it told in a more eclectic mix of songs, choreography and irreverent humor, thanks to the story and lyrics by Phil Olson. In many ways this production takes the Church Basement Ladies out of the church and puts them in a bar in Bunyan Bay. The Norwegian Lutheran jokes are the same no matter who is telling them—and which audience is laughing at them. And, just like the Church Basement Ladies, Don’t Hug Me has become a franchise. There are four plays so far with plans for the fifth to premiere in 2014.