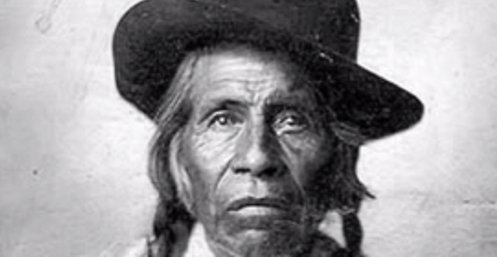 We grew up hearing the story of local trader and store owner Andrew Myrick, who told starving Dakota people to “eat grass or their own dung” if they were hungry. He was one of the early fatalities of the 1862 US-Dakota War, a figure our very conservative father offered as a cautionary figure to encourage us to use civil discourse

Many other people tell us that they didn’t learn about the history of the 1862 war and its consequences to Dakota people and they’re shocked to learn about the brutal war and its even more brutal consequences: a concentration camp at Fort Snelling, deportation, and the bounties on Dakota people  We tend to wonder who grew up with the ability to not-know, not-learn, or to forget.

In the last month, there’s been a kerfuffle over the text of plaques to accompany a statute honoring Shaynowishkung, or Chief Bemidji, an Anishinaabe leader who died in 1904. One of the plaques would include Myrick’s remarks, then explain Shaynowishkung’s role in persuading the northern nations from joining Dakota people in the war.

One Bemidji City Council member felt that forgetting about Myrick was the best way to not insult white people as well as to silence Myrick’s potty mouth forever, the Bemidji Pioneer reported in April’s City Council approves Chief Bemidji plaque language: Members vote 4-3 to include mention of atrocities against Indians as part of project.

Council member Nancy Erickson also was opposed to the descriptions of the middle two plaques. Erickson took particular umbrage at the inclusion of a quote that is part of the plaques’ mention of the Dakota War. Specifically, the quote is from white trader Andrew Myrick who famously said of starving Minnesota Indians, “Let them eat grass, or their own dung.”

She said including the quote would simply perpetuate the words.

“I’ve sat in this council room many times where there has been an angry crowd out there and someone in the back of the room has made an absolutely ridiculous statement that ended up in the newspaper the next day,” she said. “I would be so embarrassed if I was that person, if that statement got carried down generation after generation…. that statement is an insult. It’s an insult to the white population…. it holds no value, that statement. That is the core of where I’m coming from.”

. . . Jody Beaulieu, a member of the Chief Bemidji Statue Committee, which oversaw the writing the plaques, implored the council to “be brave” and vote to keep all four. The statue was about more than just honoring Chief Bemidji himself, she said.

“It’s about the healing of the community,” Beaulieu said. “It’s about the understanding that these plaques will bring… it’s about not being afraid to let go of some of that white privilege; of not knowing the truth.”

Bemidji Mayor Rita Albrecht also spoke in favor of keeping the plaques, saying it was necessary for Bemidji to acknowledge a dark chapter in Minnesota’s history.

“We have tried for many years to sanitize history, to ignore history and to not really be truth-tellers,” she said. . . .

Last week, however, in CITY GOVERNMENT: Council wants to move past divisive debate on Chief Bemidji plaques, we learned she just wants to forget the butthurt to white dignity that’s caused by remembering what Myrick said:

Bemidji Mayor Rita Albrecht as well as City Council members Dave Larson and Nancy Erickson all used their council member report time at the end of Monday’s regular meeting to comment on the contentious 4-3 vote on April 20 to approve plaques submitted by the Chief Bemidji Statue Committee.

Erickson was one of those opposed to the plaques, and during the April 20 debate took particular opposition to the inclusion of a quote from white trader Andrew Myrick, who famously said of starving Minnesota Indians, “Let them eat grass, or their own dung.”

She said in April that including the quote would simply perpetuate the words and Myrick’s assertion was “an insult. It’s an insult to the white population…. it holds no value, that statement,” she said.

Erickson said since the meeting in April, she received requests for additional comment from people as far away as Fargo.

“You cannot stew over every issue,” she said. “Although I still do not support (the plaques), I respect the vote as a democratic process. I really have nothing further to add to this, so I just wish that people would quit asking me for my comment. My comments have been made, the matter is settled.”

So now we can all forget about it and have some pie. Wouldn’t that be comforting?  Earlier, Bemidji resident wrote the editors that The real and full truth needs to be known:

During the April 20 Bemidji City Council meeting, Councilwoman Erickson provided a shining example of both white privilege and white fragility. During the meeting the councilwoman referenced the vile historic quote from Andrew Myrick, stating that the quote is an “insult to the white population and certainly it holds no value whatsoever”. While I can agree that the statement is an insult, it was quite obviously not pointed at the whites.

Furthermore its inclusion is entirely appropriate as it is truly indicative of the governmental policy of the time, one which chose not to learn anything useful from the indigenous people or their culture but to cast them aside, and to attempt to snuff their culture out. It was a governmental policy of making treaties that promised, but never truly delivered, further accommodated by the “dominant” (white) culture’s ability to sanitize history to its own liking and benefit. This appears to be the history that has informed Ms. Erickson and which makes her comfortable, but it is not the history that has been experienced by the Anishinaabe (or other Native American) populace of our area and our state.

Fortunately, the days of “kill the Indian, and save the man” are mostly over. I am heartened to know that the younger generation, as exemplified by Mr. Olson’s and Mr. Meehlhause’s words, are able to understand that it is necessary to confront the ugly truths of yesterday in order to not only heal the existing wounds, but to learn how to conduct ourselves (and our politics) to prevent such atrocities from re-occurring. To bury the truth, as Ms. Erickson suggests, is exactly the attitude that has created the state of race relations that exists today. The real and full truth needs to be known.

In regards to the telling of Shaynowishkung’s story, how could we ever appropriately honor the man without having a full and truthful understanding of the times in which he lived? It was despite all that he experienced and saw happening around him that he chose to stand firm to the Teachings of the Seven Grandfathers, a choice taken at great personal expense. This should be the legacy of Shaynowishkung, one that should set an example for our population as a whole.

I would also like to acknowledge Mayor Albrecht, and Councilman/former Mayor Larson for displaying the bravery and fortitude to do the right thing.

As its name suggests, the Anishinaabe people weren’t part of the US-Dakota War, thoughthe plaques note that Shaynowishkung played a role helping keep the war from expanding north:

“So far as I am concerned, if they are hungry let them eat grass or their own dung.”

— Infamous insult by Andrew Myrick, spokesman for the traders, August 15,1862.

The Dakota War was the direct result of widespread poverty and starvation.When warfare broke out among the Dakota and the settlers, Shaynowishkung became famous for his speech to assembled Ojibwe braves “when by his reasoning he prevented the Chippewa from joining the Dakota in the historic New Ulm Massacre” in which many hundreds died. — Blackduck American, 1904. Trials and sentencing of over 1000 Dakota led to the hanging of 38 warriors in Mankato on December 26, 1862. This remains the largest mass-execution in US history.

Though the Ojibwe had been promised regular payments from the government, these payments were often late or sometimes even stolen by corrupt officials or traders who dealt with the Ojibwe. When violence broke out between the Dakota and white settlers in 1862, Bagone-giizhig briefly threatened to join Taoyateduta’s (Little Crow IV’s) Dakota warriors in attacking white settlements. To encourage other Ojibwe to fight, he also spread a false rumor that the U.S. government was planning to force all Ojibwe men to fight in the Civil War.

Governor Alexander Ramsey feared potential alliance between the Dakota and the Ojibwe. He and other officials met personally with Bagone-giizhig and agreed to provide the promised payments. The Mille Lacs and Leech Lake Ojibwe, however, were angry at being tricked into almost going to war. Bagone-giizhig’s lie cost him their support for good. . . .

While the Myrick statement isn’t directly related to Shaynowishkung or Bemidji, the consequences of those remarks in the form of the 1862 War are important for understanding the historical importance of the figure being honored.

Given the serial forgetting of indigenous history by Minnesotans, including background about the war is a good step toward making the statute more than just a set-piece. Good for Mayor Albrecht and others for their willingness to understand that history isn’t a comfort preservation zone.