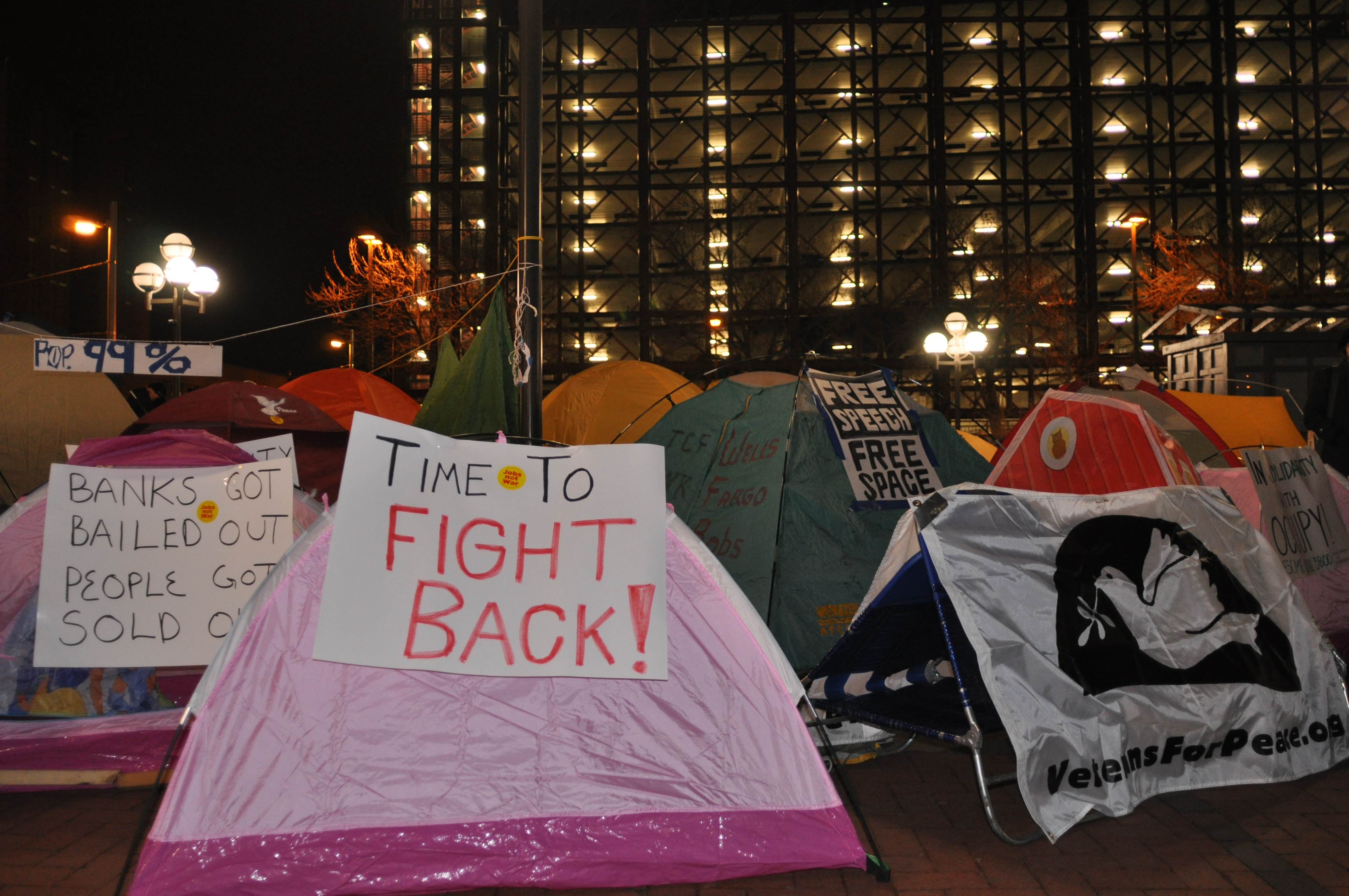 After OccupyMN supporters pitched tents on Wednesday night (11/30), sheriff’s deputies moved in at four a.m. to seize and lock away the tents, effectively evicting OccupyMN from the Hennepin County Government Plaza, which it had renamed the People’s Plaza during nearly two months of occupation. According to the Star Tribune, two OccupyMN protesters who then set up a tent at Minneapolis City Hall were arrested by Minneapolis police, who also “ripped down a tent that had been set up on the sidewalk.”

OccupyMN had called on supporters to brave the weather and pitch “99 tents for the 99%” as part of a cold weather camp-out to address homelessness, the foreclosure crisis, and free speech. A crowd of almost four hundred gathered in Minneapolis at the Hennepin County Government plaza Wednesday evening to demonstrate against the county’s restrictions on tents and sleeping in the plaza, which has been the site of OccupyMN protests for nearly two months.

The November 30 demonstration began with a 5:30 PM rally featuring speakers from labor organizations, anti-war groups, student movements, and local government.  Minneapolis City Council Member Cam Gordon (Green Party – Ward 2) and state representative Karen Clark (DFL-Minneapolis) were among those to address the crowd in what has become known as the “People’s Plaza” to those in the OccupyMN movement.

As the rally drew to a close around 7:00 PM, participants began to set up tents in the plaza, violating a November 23 order from Senior U.S. District Judge Richard Kyle.  While controversy has brewed over the right to erect tents since the earliest days of the Occupy movement, both here in Minnesota and around the country, “99 Tents” organizer Sam Richards says last week’s order upholding the county’s tent ban really helped spur the Wednesday night demonstration.

“We saw the court case kind of going the way we didn’t want it to, even though we were told we had a sympathetic judge and a strong case and everything,” says Richards.  “And so we said, well, if we’re not going to win in the legal process, we’ve got to just win our rights on the ground. And that’s what we’re doing here tonight.”

According to OccupyMN organizers, the 99 Tents demonstration also aimed to draw attention to   foreclosure and housing issues. Osha Karow, an organizer with OccupyMN since the movement’s beginning, said the event is an act of solidarity with the homeless, who often face a double standard when occupying the plaza and other public spaces.

“We noticed kind of a hypocrisy in the system, whereas we were given more lenience than homeless people are given just day to day here in Minneapolis,” said Karow. “So [organizers] figured we would have a 99 tents for the 99% type of event.”

Alex Utne, a newcomer to OccupyMN demonstrations, planned to stay overnight at the 99 Tents event. He says he was inspired to protest the tent restrictions due to his own experience battling Minnesota winters without shelter.

“I took offense to it because I was homeless for four years,” says Utne, who now has a place to live. “Three years spent in Minnesota, homeless in the winter, is the absolute worst. It’s hard. But that’s why I took it personally. That’s why I’m here.”

Demonstrators managed to set up about 40 tents in the Government Center plaza by eight p.m. on Wednesday. Outdoor electricity in the plaza had already been shut off, but the group managed to capture the event for its live video stream using car battery-powered laptops. Snow began to fall around 8:30 p.m., when protesters practiced forming a human chain around the tent village — a tactic they planned to employ if police tried to remove the tents. 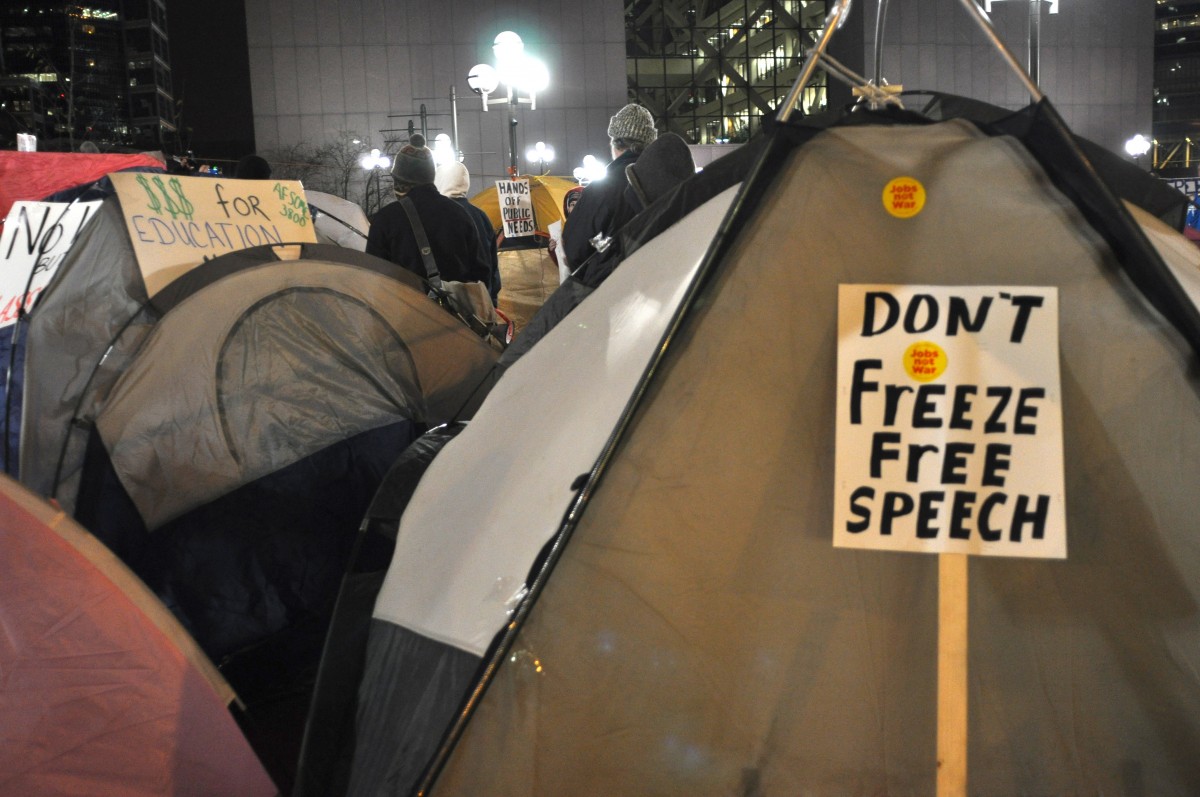 Police gathered around the edges of the plaza throughout the evening but did not interfere with the encampment on Wednesday evening. Though the Minneapolis protest happened only a day after police arrested hundreds and tore down Occupy camps in Los Angeles and Philadelphia, OccupyMN organizers anticipated less dramatic reactions from local law enforcement.

“The law enforcement scenario that we’ve dealt with here has been a lot different than in the other occupations. They’re really afraid to make arrests,” said Richards. He explained that local law enforcement preferred to issue trespass notices ordering protesters off of county property. “They realize that any time they come in with force and remove people that are trying to peacefully assemble, it draws so much more attention and then more people come down.” 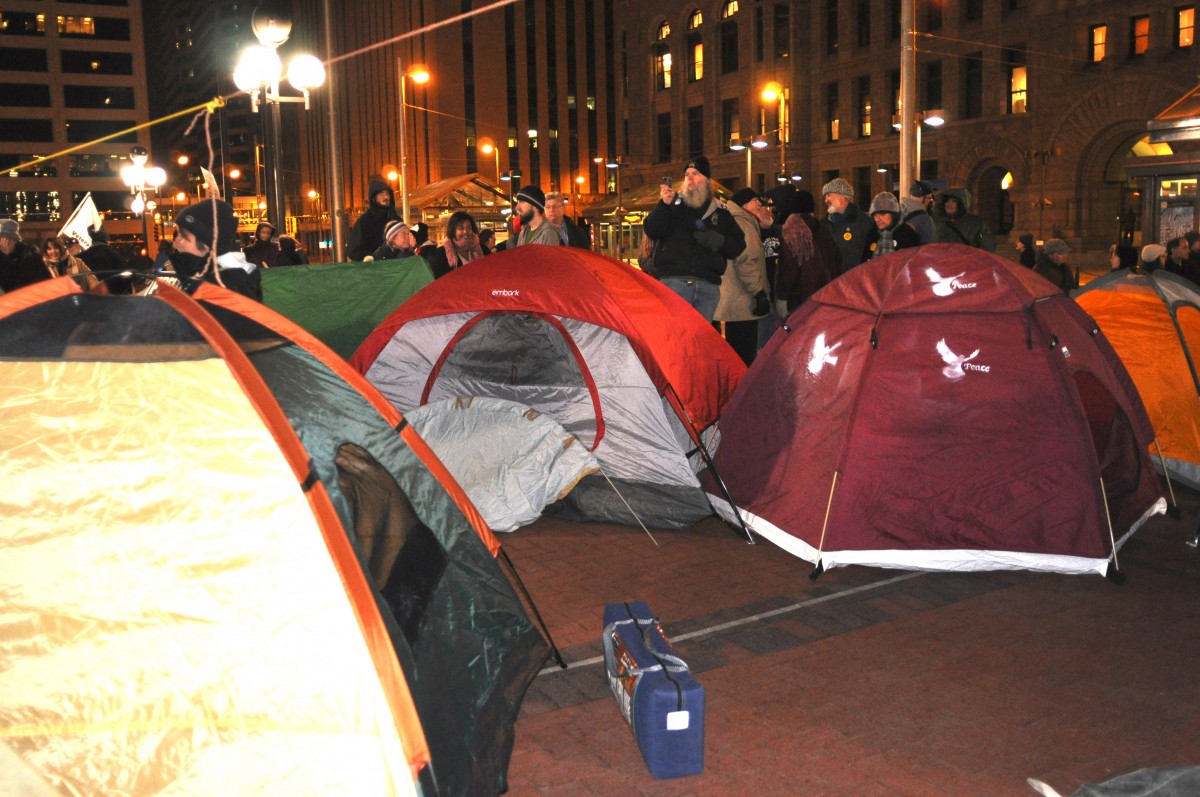 Liz Dahl, an Occupy MN organizer who has spent most nights in the plaza since early October, said demonstrators were prepared to handle any actions by law enforcement against the tent encampment. According to Dahl, the Occupiers held civil disobedience training, had a legal team in place, and were prepared to hold an emergency General Assembly session to decide on steps to take if confronted by law enforcement.

“In the morning they will probably come full force at us with —  I don’t know what they’re going to do, honestly. But we’re ready,” said Dahl. 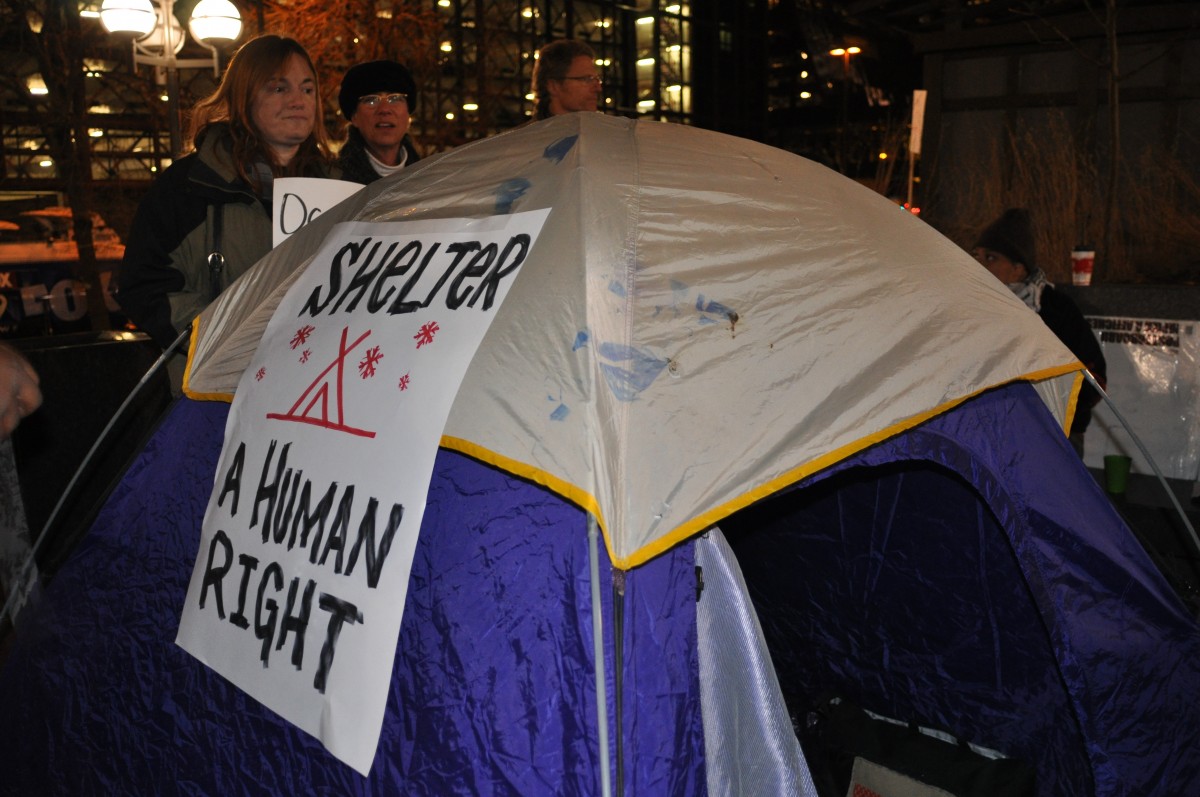