Workers briefly occupied the Wells Fargo tower downtown St. Paul Tuesday, shaming the giant bank for using loopholes in the corporate tax code to avoid paying its fair share. The rally, timed to coincide with the opening day of the Minnesota legislative session, concluded with a march to St. Paul RiverCentre, where the Minnesota Chamber of Commerce was holding its annual “Session Priorities” gala dinner for state lawmakers.

The protest march, organized to spotlight the “priorities of the 99 percent,” was planned by SEIU Local 284, which represents 8,000 school service employees statewide, and the advocacy group Minnesotans for a Fair Economy.

“At the beginning of the legislative session, Wells Fargo and the Minnesota Chamber of Commerce will tell state legislators how to vote to protect the agenda of the top 1 percent,” the organizers said in a statement before the event. “Minnesotans who have had enough of such skewed priorities and corporate irresponsibility will assemble this afternoon to speak out.” 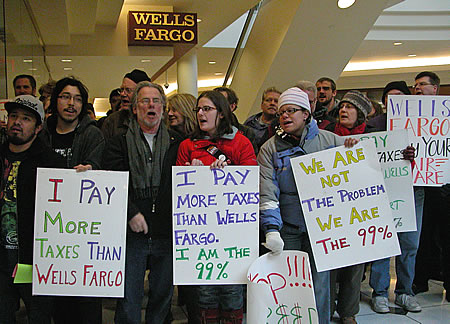 Wells Fargo has accepted more in federal tax subsidies than it has returned to the government in tax payments, protesters said. (Photo by Michael Moore)

Wells Fargo is among the nation’s most notorious corporate tax avoiders, according to the non-profit research group Citizens for Tax Justice. The company has 19 subsidiaries in the Cayman Islands, a tropical tax haven.

From 2008 to 2010, Wells Fargo paid an effective tax rate of -1.4 percent. The means the bank accepted more in federal tax subsidies – $17.9 billion over the three-year period – than it returned to the government in tax payments.

At the rally, workers expressed their outrage on hand-written signs, including “I pay more taxes than Wells Fargo,” and “Wells Fargo, pay your fair share!”

Blaine McCutchan, a Local 284 member from Golden Valley, said that while Wells Fargo has padded its profit margins by dodging federal taxes, the public school where he works as a facilities maintenance employee, Intermediate District 287, has struggled with steadily shrinking budgets.

“I love my job,” McCutchan said. “But each day it becomes more and more difficult to make sure that the building I am responsible for is in the best condition. With each budget cut, my ability to maintain an environment where students can learn and grow is undermined.