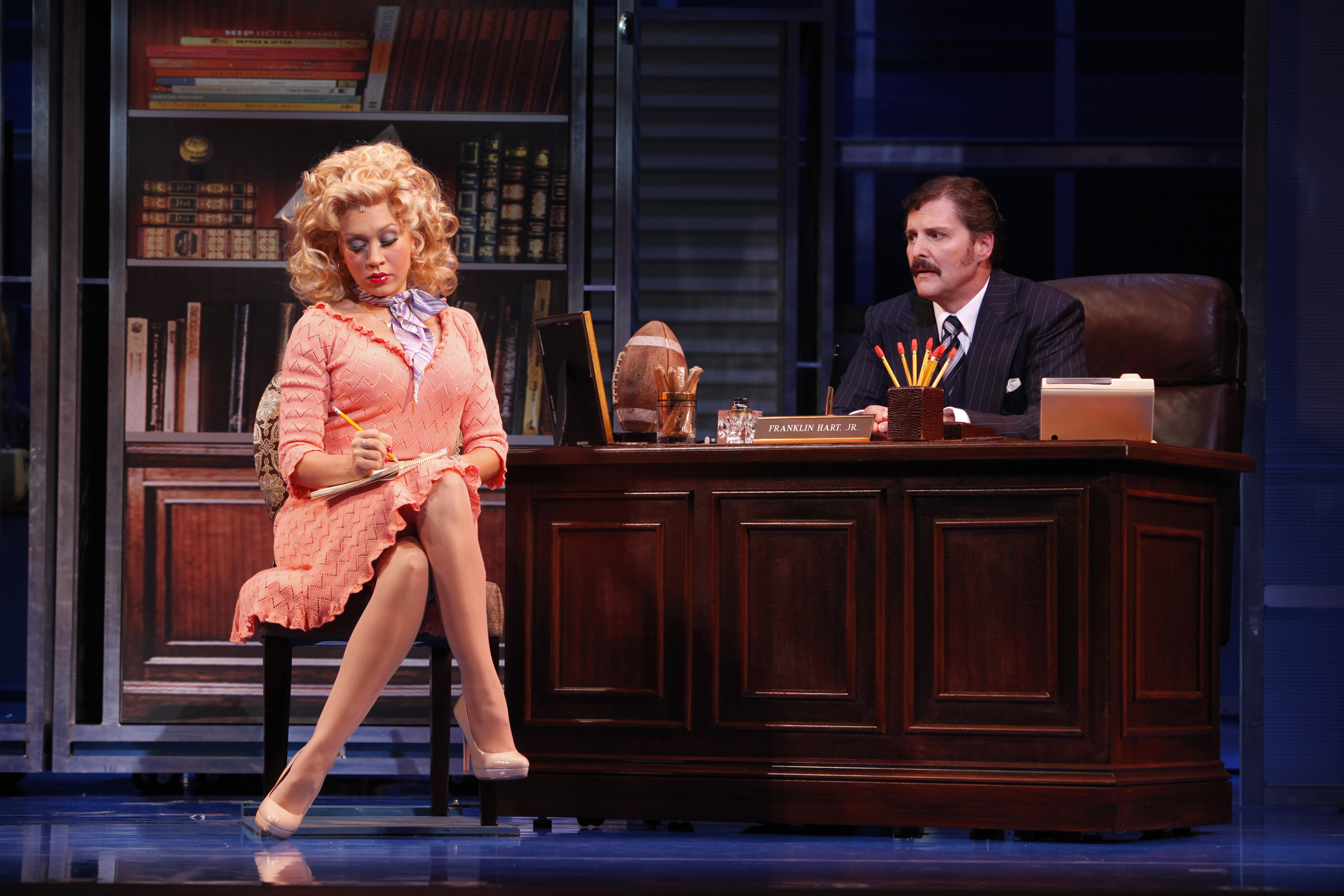 Diana DeGarmo and Joseph Mahowald in 9 to 5: The Musical. Photo by Joan Marcus, courtesy Ordway Center for the Performing Arts.

If you are a person who worked in an office in the 1960s or 1970s, you owe yourself a trip to the Ordway to see 9 to 5: The Musical. I was there last night with my sister-in-law and we both were part of that workforce. The age of the audience indicated that we were not the only ones who remembered living the story and seeing it in the 1980 movie and wanted to revisit that great comedy in a theater setting.

For those not familiar with the movie, 9 to 5 is the story of an office in 1979 with the male dominance of all management positions and the expectation that the women were there to do all the menial tasks while also getting the real work done. The story involves three of the women who bond over the unfair treatment they receive from their boss, Franklin Hart. After mistakenly believing that they poisoned the boss with rat poison in place of Sweet’N Low in his coffee, they’re forced to hold him hostage until they figure out a way to clear themselves.

The play opens with Dolly Parton herself projected onto the stage, welcoming us with her enthusiastic “Howdee!” In a very clever rendition of the title song, the show opens with a large suspended clock set at 7 a.m. and the ensemble moving through their preparations for the work day. Dolly looks down on them and occasionally stops the action to introduce us to the main characters. As a fan of the movie I immediately recognized each of them and it was as if Lily Tomlin, Jane Fonda, and Dolly Parton were on stage bringing the movie to life.

The multi-dimensional set by scenic designer Kenneth Foy gives depth to the action
that made me feel like I was looking into a real office. The set changes are accomplished with the use of long panels, a fluorescent light bank, desks, bookcases, and three cubes with interchangeable panels. There is also Franklin Hart’s bedroom complete with the homemade pulley system to suspend him and hold him captive, and Violet’s living room where the ladies partake of a “funny” cigarette Violet confiscates from her son while they fantasize about how they would take care of their evil boss. The sets moved so effortlessly and cleverly that the process became part of the show for me.

This touring show features a group of lead actors who all have impressive Broadway experience. The strongest performances are by Dee Hoty as Violet Newstead, Diana DeGarmo as Doralee Rhodes, and Kristine Zbornik as Roz Keith. Hoty is very believable in her portrayal of no-nonsense Violet, the woman with the experience and skills who’s always overlooked for promotion. Zbornik portrays Roz, the long-suffering assistant who is secretly in love with Mr. Hart and will do anything for him—if only he would ask! Her rendition of “Heart to Hart” showcases her acting and singing skills. And Diane DeGarmo has the unenviable task of bringing Dolly Parton to life on the stage as Doralee, the buxom Southerner with a heart of gold who just can’t understand why no one in the office likes her.  DeGarmo captures not only Parton’s voice but her glam as well, with a softer side that I found extremely likeable. Her solo “Backwoods Barbie” clearly expresses her desire to be accepted for who she is.

The program notes from Patricia Mitchell, the Ordway’s President and CEO, acknowledge the fact that “the storyline […] has its origins in the reality of the workplace where women have not always been treated with the respect they deserve.” I found the treatment of the women very hard to watch at times. While portrayed as comedic entertainment it was a painful reminder of not only where we used to be but in some cases of things that are still going on. I have no doubt that the subplot involving one of the women questioning salary disparity and losing her job because of it still goes on today in some offices. There are still jokes made at the expense of minorities that are allowed to be told. And there are still offices that have no regard for the needs of parents to have flexibility in their work hours.

I was disappointed that when Violet fantasizes about becoming the first woman CEO, the song is titled “One of the Boys” and she envisions herself as Time’s Man of the Year. Why not make this instead a dream of all women finding success? I also felt that the sound was uneven and heard this comment from several other audience members during intermission. Some of the songs were so loud they were uncomfortable, while at other times it was very difficult to understand the lyrics of the new songs written for this production. In particular, I did not understand about 90% of the lyrics in the song that ended Act One, “Shine Like the Sun.” Interestingly enough, it did not hurt my enjoyment of the show since I felt that this song, like some of the others are used as filler and do not advance the story.

All this being said, I did find 9 to 5: The Musical fun and entertaining. The acting is energetic, the sets are fun, and it does justice to a very good movie. And, if you’re a Baby Boomer like me, bring someone from a younger generation to keep the discussions going.