“Environmental issues are all around us,” said Jerry Lopez. “We want people to be able to identify issues, that when something doesn’t look right in their neighborhoods to know what to do and where to turn for help.” Teenage garden enthusiasts, traditional dancers, and Zapatista revolutionary ideals came together with Lopez’s practical problem-solving at Chalchiutlicue Environmental Justice Summit in St. Paul and Minneapolis at the end of June.

Lopez is the executive director of Ce Tempoxcalli, which sponsors the annual Chalchiutlicue event. The eighth annual summit started June 29, with a full day of workshops at the Paul and Sheila Wellstone Center in St. Paul. Topics included environmental justice work from the Zapatista perspective, developing a just neighborhood food system, identifying sources of water contaminants in your neighborhood, family choices about care and purchasing food, water drums, youth organized gardening, and more.

“if you think that the Zapatistas are all about guns you are wrong,” said Chris Silva at the “Beyond Activism” workshop. Silvas talked about about the “Lessons of the Zapatistas:”

1.  Revolution is a science…study control in systems to find ways to propose alternatives.
2.  You practice the rules and behaviors for the world you want to live in… NOW.
3.  Accumulate strength over time by careful attention to collectively organizing and using political resources….BUILD IT RIGHT.
4.  Build a world where many others also can fit…diversity.
5.  Make your plans simple and clear so everyone can participate.

While the activism workshop talked a lot about theory, another workshop offered a more hands-on approach, with teens talking enthusiastically about how to grow gardens the way their grandparents/ancestors did in Mexico.

As a non-profit organization, Ce Tempoxcalli’s commitment is to reconnect as many people as possible to the earth through science, camps, workshops, conferences and festivals.  Their mission is build healthy communities by revitalizing their indigenous cultural knowledge.  “This year’s conference was moved to a date outside of the school year where we historically targeted students in grades 7 and up,” said Lopez.  “Now we are connecting to summer programs, families and the community.” Half of the 135 people registered for Chalchiutlicue were youth.

Ce Tempoxcalli was joined by co-sponsors Danza Mexica Cuauhtemoc, West Side Community Organization and U.S. Forest Service. “We are hoping in the future for a good number of organizations to give voice and community ownership of the summit,” said Lopez. “And then they in turn would spread the word about environmental issues.” 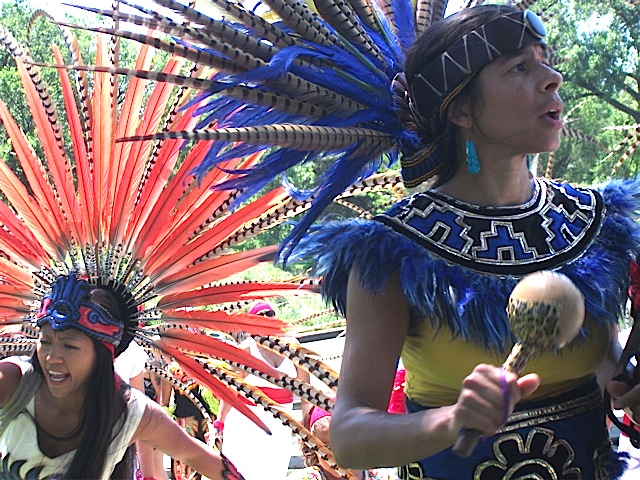 Danza Mexica Cuauhtemoc, a local group of Mexica-Aztec dancers, held a march and ceremonies honoring the waters of the world on June 30 at Powderhorn Park in Minneapolis.  The whole summit and celebrations are grounded in ceremonial traditions of Mexica-Aztec people of Central Mexico.  “They have been our foundation,” said Lopez.  “Ce Tempoxcalli organization came out of the work of Danza Mexica.” 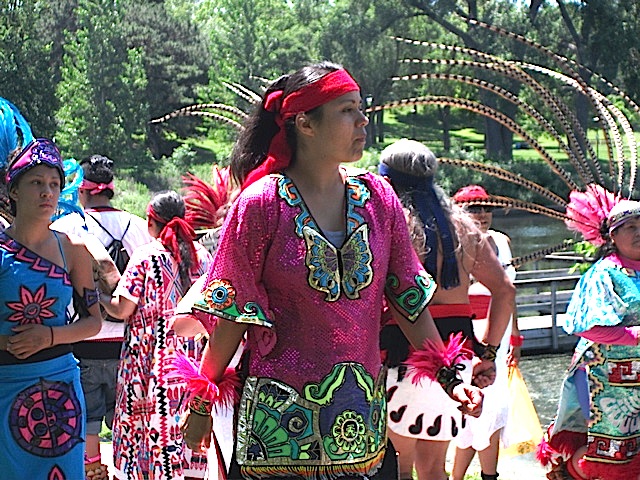 The celebration continued on July 1 at Fort Snelling with an offering of flowers at Pike Island, the confluence of the Mississippi and Minnesota Rivers, followed later in the day by a community potluck feast.

According to Ce Tempoxcalli, this is the longest running annual environmental justice action summit in the state of Minnesota.