80 Years Young is a comprehensive study of the history surrounding the Turnblad mansion, from its brief years as a homestead to its current status as an authoritative museum of Swedish-American life.

The exhibit is located in the lower level gallery of the Institute, the mansion’s basement, which is where the auditorium, Viking Room, and Kaffestuga Coffee Shop also are located. Artifacts within the exhibit are arranged mostly chronologically, sometimes thematically, beginning with the mansion’s beginnings as the home of Swan J. Turnblad. 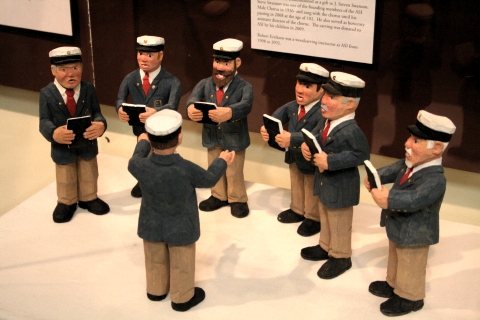 Turnblad was the publisher of Svenska Amerikanska Posten, a Swedish newspaper once published in Minneapolis. Minneapolis architect firm Boehme and Cordello were commissioned in 1903 to build Turnblad’s 33-room French Chateau-style mansion. The Turnblads only resided in their magnificent home for 19 years. Mrs. Turnblad had passed in 1926, and Swan and daughter Lillian moved across the street in 1929. That same year, the mansion was incorporated as the American Institute of Swedish Arts, Literature, and Science.

As the name suggests, the Institute focused on promoting the work of Swedish scholars and artists, but soon grew to encompass emerging interests. The oldest affiliated group is the Male Chorus, which formed in 1936. Curator Byron Nordstrom notes music’s role in Swedish life. “It reflects one of the strongest traditions in Swedish America—singing,” he says. Soon afterward, education became a priority for the Institute and it began to offer language classes. Around this time, the name was shortened to the American Institute.

In 1952, ASI received the Varmland Gift, a collection of over 300 art objects. “The Värmland Gift is incredibly varied in its content,” says Nordstrom. “Folk arts—wood carving, weaving, knitting, metal work. ‘High’ arts—sculpture and painting. Crafts—glass, metal, wood, ceramics. Amateur, professional, commercial…the inventory is remarkable. Naturally, there were some local styles and forms. The folk arts of Sweden are highly varied and can be classified by region, county, parish, and artist. The gift was really intended to be a very thorough sampling of the province’s arts and culture.”

ASI formed a charter flight program in the 1960s. The service brought in new members for the organization and allowed access to Sweden not yet available, as air travel was still relatively new at the time. “The flights,” Nordstrom notes, “were important [for a couple of reasons]: bringing the later generations of Swedish Americans back to their ancestral homeland, and making some money. The flights were profit-making, and that was important to the organization.”

Almost immediately upon its founding, the Institute became the foremost authority in the U.S. for all things Swedish. Such a lofty goal could not have been met without the aid of Swan J. Turnblad, whose initial vision for the mansion was to preserve Swedish life. For him, preserving Swedish culture meant upholding the customs of Sweden instead of integrating into American life.

One curious point is what exactly Turnblad wanted to preserve in the mansion. As Nordstrom points out, “the mansion was a monument to Turnblad. He wanted to display his success, his station in society, and his good taste.”

In visiting the mansion, you soon realize that you are in the presence of greatness, and that only a great man with an even greater vision could achieve such a marvel. There’s a buzz, a magical kind of feeling, in the Turnblad mansion, one that enchants visitors to the American Swedish Institute as much today as it did in generations past.