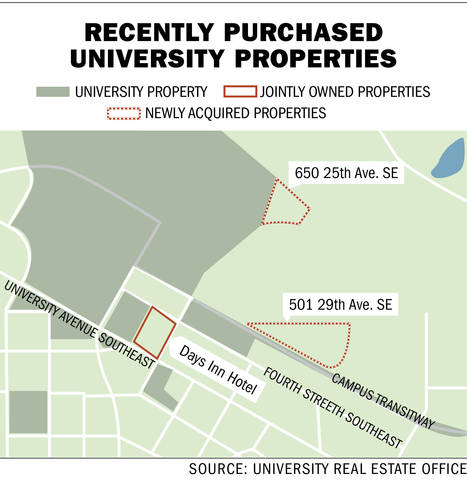 Some of the unused land behind TCF Bank Stadium could sprout more research buildings as the University of Minnesota continues a slow expansion beyond the eastern confines of its Minneapolis campus.

At a meeting earlier this month, the Board of Regents approved the purchase of two properties near the University’s Biomedical Discovery District that could be used for research — an acquisition that follows the institution’s joint purchase earlier this year of the property where the Days Inn Hotel and the Tea House Chinese Restaurant now sit.

At the meeting, Regent John Frobenius called for a renewed effort to increase the size of campus as new developments continue to spring up around the University.

“We must take advantage of every opportunity we have to gradually expand our boundaries,” he said at the meeting.

Making expansion a priority, Frobenius said, will keep the University from becoming “hemmed in” as it develops the land at its border.

University officials already watch for prospective properties that could increase the campus’s reach, but there isn’t a push to grab up every property they can or to sit on land, University Director of Real Estate Susan Carlson Weinberg said.

“The University is not in a growth or expansion mode,” said Monique MacKenzie, University director of planning, space and architecture. “We believe we have too much space as it is.”

The recent purchases align with the University’s plans for growth near certain areas of the campus, MacKenzie said, like near the Superblock and the East Gateway District behind TCF Bank Stadium.

Frobenius agreed that the University shouldn’t buy every parcel of land that becomes available but said he “would slightly turn up the aggressive dial, personally.”

With more land, he said, the University would have the necessary room to improve and expand its facilities. For example, the University will likely need more health care centers over time, he said.

A new Ambulatory Care Center is currently planned for a parcel of land near the East Bank’s Oak Street Ramp, and Frobenius said there will likely be a need for similar facilities in the future.

Officials are also making plans to develop the Days Inn property, Carlson Weinberg said, although they haven’t decided on what exactly will take the hotel and restaurant’s place. Ideas have included an office building, a hotel and housing, she said, adding that the strategy will be to steer clear of the saturated student housing market.

The University’s most recent purchases could be used for research in the future, Carlson Weinberg said. While administrators determine their final use, she expects at least one of the parcels to become a parking lot.

Together, Carlson Weinberg said, the two recently purchased properties total 3.89 acres and cost $7.9 million — a price she said was competitive compared to what developers pay in the area.

The properties will also require development costs, she said at the board meeting, which could range from $27,000 to more than $1 million, depending on how the parcels are used.

She said the University will incur debt to pay for the properties, adding that leaders discuss whether they have enough funds whenever they consider buying properties.

Chief Financial Officer Richard Pfutzenreuter said the University has enough financial resources to slightly increase property purchases, adding that the institution has made a habit of occasionally acquiring land at the campus’s edge.

“We’ll continue to look for opportunities like the ones we just took to the Board of Regents,” he said.

With 22 million square feet of space on the Twin Cities campus, MacKenzie said, each new land acquisition is a challenge.

The University plays a balancing act between devoting resources to the upkeep of current buildings and developing new ones, she said. And when the University constructs a new facility, officials look for a matching one to decommission, she said.

Despite the University’s reputation as having one of the largest campuses in the country, some officials aren’t concerned about further inflating the campus’s size.

The University provides effective programs to keep new students from getting lost on campus, Frobenius said, and Carlson Weinberg said the surrounding community expects the University to provide an economic boost through programs like new research facilities and internships.

If the time and the money are right, Frobenius said, the University should keep looking for opportunities to expand.

“It’s not as simple as buying every piece of land that comes available,” he said.