Overall, Bluestem Prairie is pleased with the compromise minimum wage agreement that’s coming out of the conference committee. The wage is raised to $9.50 in steps, it’s indexed to inflation (and apparently deflation), and there’s a small business rate and youth rate.

However, we’re a bit concerned about what we’re told by sources in a sop to resort owners in Majority Leader Bakk’s district to allow a lower wage for those coming to America using J1 “cultural exchange” visas.

Here’s the language in the amendment:

Civil rights groups and anti-trafficking organizations have criticized abuse of the J1 “cultural exchange” visa program by employers, and Bluestem hopes that the State of Minnesota will provide sufficient oversight of employers and workers brought in under the program, given that the workers are being paid less. 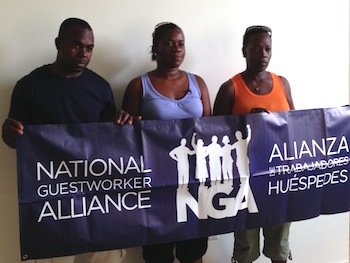 Criticism of the J1 visa program

The Southern Poverty Law Center published what is perhaps the most scathing criticism of the J1 system in February 2014, Culture Shock: The Exploitation of J-1 Cultural Exchange Workers. The authors write:

Employers are using the program to fill labor needs, transforming a program designed to foster international goodwill into a source of cheap, exploitable labor. For the employers, the program offers a way to cut labor costs. Employers do not have to pay payroll taxes for J-1 workers.[2]

The savings an employer can realize by not paying an employee’s Medicare, Social Security or federal unemployment tax — around 8 percent on its total payroll expenses — have led staffing agencies to promote the program as an inexpensive labor force.[3]

The sponsors and their overseas partners — the groups that recruit and screen participants — also are reaping a windfall by charging J-1 workers hundreds or even thousands of dollars in fees to participate in the program. These fees are completely unregulated, and students and their families often fall into debt to pay them and other travel expenses. This recruitment debt leaves students vulnerable to exploitation. Faced with pressure to pay off loans, students and interns may opt to endure workplace abuse until they can return home.

J-1 workers often discover the cultural experience they invested in does not exist. They are frequently placed in low-paying jobs with little or no opportunity for cultural exchange. Students told the SPLC that their experience is dominated by work without the opportunity to enjoy American culture. This is true even after the State Department, which oversees the program, began requiring sponsors in 2012 to place J-1 students in jobs that ensure they have cultural exchange opportunities on and off the job. From students’ experiences, it’s clear this cultural exchange requirement too often exists only on paper.

When these workers aren’t on the job, they are often forced to live in overcrowded housing with other J-1 workers. They are frequently paid less than the minimum wage after their employer makes excessive deductions for housing, uniforms, transportation and other expenses. Some J-1 workers discover they must work a second job just to survive.

But this is more than a story of debt and disappointment. It has put some young students at risk of human trafficking and other nefarious activity.[4]

The State Department’s 2013 Trafficking in Persons Report noted that vulnerabilities in the J-1 program can “potentially facilitate human trafficking.”[5]

When these workers complain or try to stand up for their rights, they find few places to turn. The State Department claims it has no authority to sanction employers and typically does little to help workers with employment-related issues. J-1 workers cannot access federally funded legal services to help them address workplace violations. And few private lawyers are willing to take a complicated case that involves internationally recruited workers.

Bluestem hopes that Minnesota’s employers who hire people coming to America on cultural exchange J1 visas are treating them well. Perhaps in exchange for allowing them to be paid less, the state of Minnesota might consider setting up a complaint hotline number of these individuals. That would be a small price to pay to prent and curtail abuse; perhaps the Restaurant Association could create a check-off for the hotline, although prudence would dictate that investigations be conducted by a state agency, perhaps the Department of Labor and Industry.

Short of stripping the section from the amendment, it would be prudent to require study of guest workers in Minnesota and allow the Department of Labor and Industry to investigate worksites with J1 workers. We certainly don’t want abuses of the system in the resort and ag industries.

The Interdisciplinary Project on Human Trafficking monitors issues with the program, noting them in blog posts like Labor abuse in the name of “cultural exchange,” courtesy of the J-1 visa program (again).

The National Guestworker Alliance works to protect rights for guestworkers (and the provision in the bill is a lower minimum wage for guest workers) to another place to learn more about issues in this area.

In a just world, adults doing the same work would be offered the same wage, regardless of their national origin.

Here’s the language of the entire amendment: A-6 Amendment