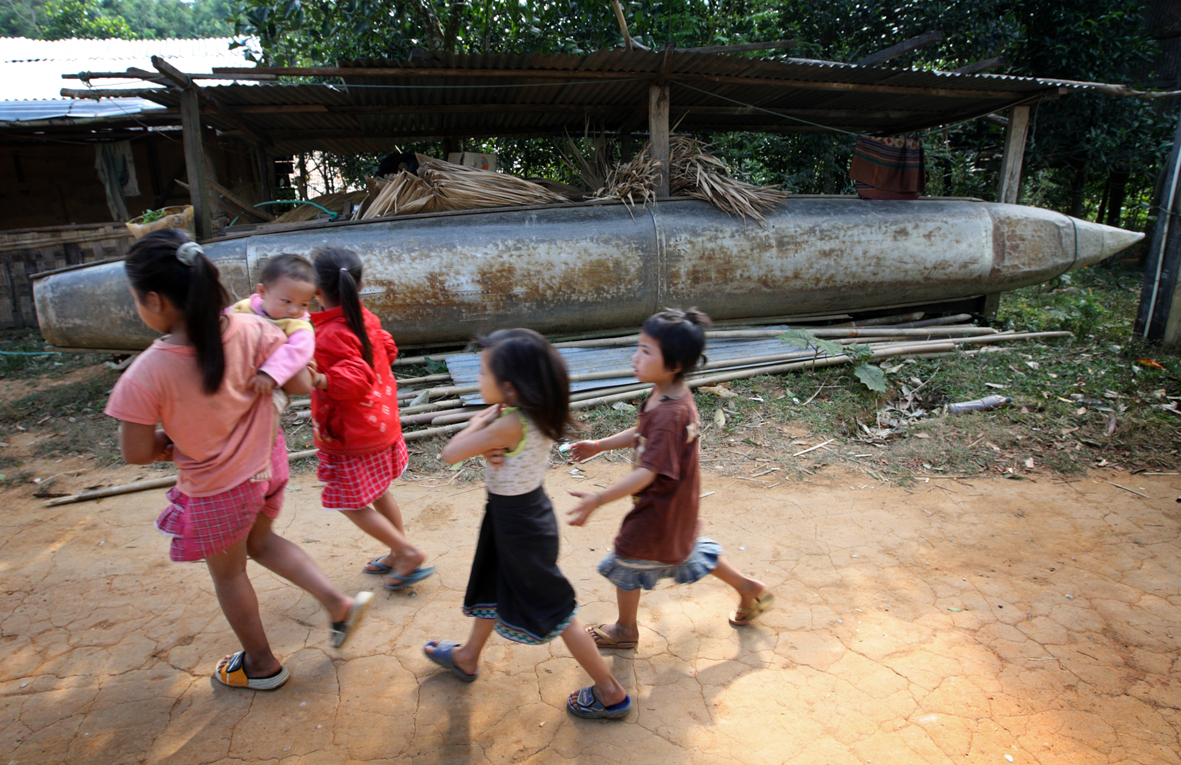 Secretary Clinton’s agenda this week will mark a historic moment: visiting Vientiane, Laos. 57 years later, it’s the first for a U.S. Secretary of State since John Foster Dulles in 1955. In the realm of foreign affairs, not only is it progress in renewing U.S.-Laos relations and shifting the focus towards a forgotten developing country in the midst of scrambling to meet its UN Millennium Development Goals, but it’s time to surface awareness on one of the biggest human rights issues in Laos: the UXO crisis (unexploded ordinance).

This is the first post in a series this week to highlight Secretary Clinton’s visit.

While Secretary Cilnton will be in Laos to discuss ASEAN efforts and the Lower Mekong Initiative; any discussion surrounding sustainable development goals should also include UXO clearance, especially if any major socio-economic improvements in Laos are to continue.

The UXO issue is a legacy that was left out of U.S. history books and one that most Americans and many Lao Americans are unaware of. During the Vietnam War era from 1964 to 1973, unauthorized by Congress, the U.S. “Secret War” began a bombing campaign that was equivalent to one planeload of bombs every eight minutes, 24 hours a day, across Laos; a country the size of Minnesota. Over a third of Laos’ land is still plagued with bombs, making it the most heavily bombed country per capita in history. An estimated 20,000 people have been killed or maimed in Laos by UXOs since the war ended over 40 years ago, with the majority of them being children.

About 70% of families in Laos work in the agriculture sector just to survive on a daily basis, yet every day, their lives are at put at risk by UXOs just for walking, working, or tending to their land. It’s time to end this legacy of suffering for the millions of livelihoods it impacts.

If universal human rights must guarantee people the means necessary to satisfy their basic needs such as food, housing, health, and education; then we must continue acknowledging the UXO crisis in Laos as a serious human rights issue. The U.S. has yet to join the international community of 107 countries who signed onto the UN’s Convention on Cluster Munitions, which prohibits all use, stockpiling, production and transfer of cluster munitions (www.clusterconvention.org). It’s a human rights issue that demands our attention and our moral responsibility to ensure that it continues to be on the U.S.’ diplomatic agenda and on Secretary Clinton’s radar. 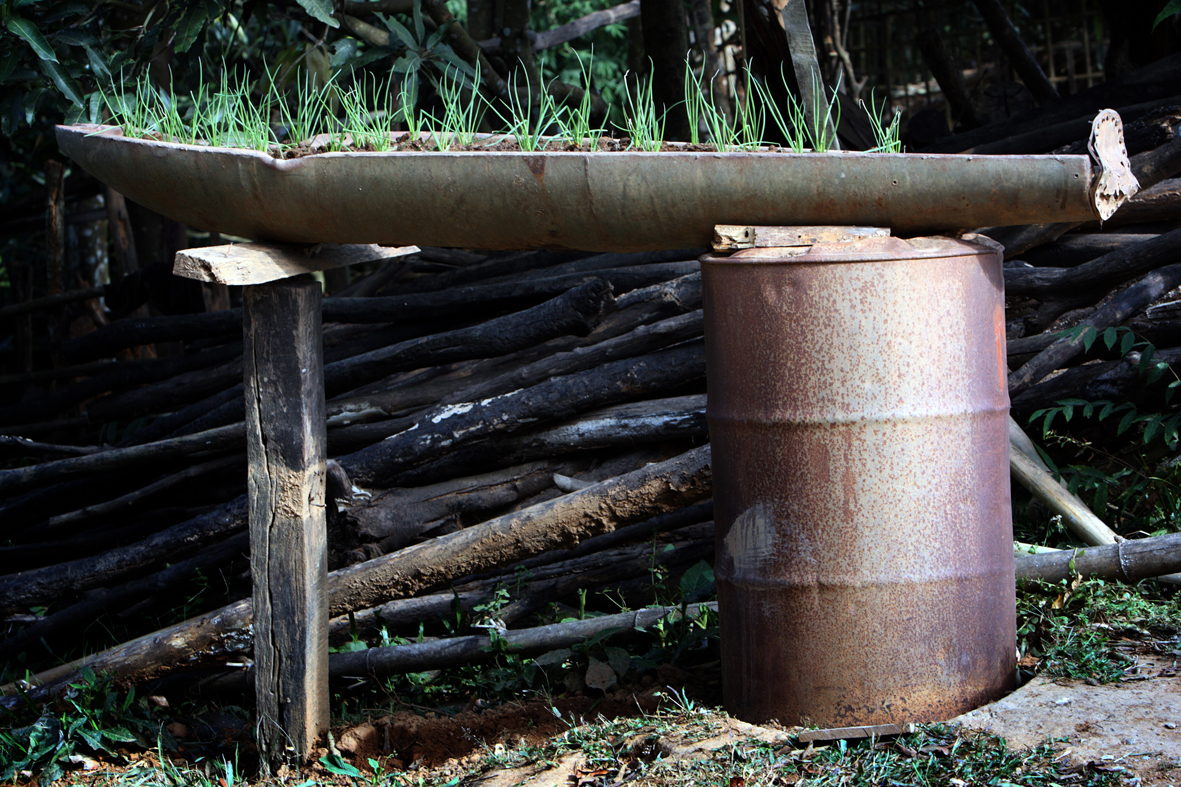 Since U.S. funding for UXO clearance began in 1997, it remained at an average of $2.6 million per year until this year, when Congress increased U.S. funding commitment to $9 million. Legacies of War (a UXO advocacy organization based in D.C.) and its supporters are asking Secretary Clinton to commit to allocating at least $10 million per year over the next ten years to help make significant progress in UXO clearance and assistance.

As the world watches Secretary Clinton’s visit to Laos as a partner in development in the Southeast Asian region, let’s call for her to keep the UXO issue on her priority list, so that we can finally end this legacy of war with a legacy that holds a transformative future of peace, hope, and dignity for the people of Laos. 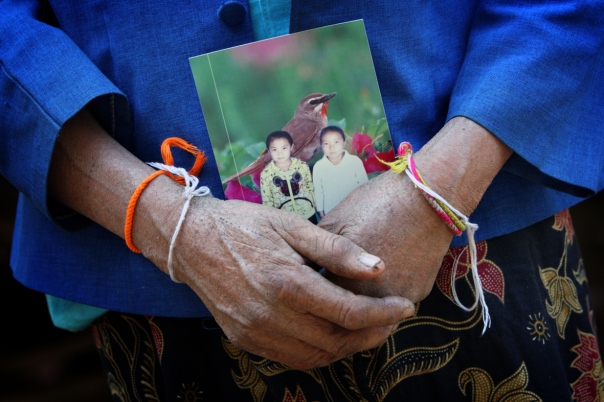 “Piou” Laos. Photo of two young sisters who fell victim to a bomblet going off while mistaking it for a toy on their way to school. One injured. The other died.

Legacies of War is a nonprofit organization founded in 2004 to raise awareness about the history of the Vietnam War-era bombings of Laos and advocate for greater U.S. funding to clear UXO. Legacies seeks to provide space for healing the wounds of war using art, culture, education, community organizing, and dialogue among the Laotian-American community and the broader U.S. public.

To learn more about the UXO issue in Laos and to take action, visit www.legaciesofwar.org.