Last year, the Minnesota House passed a health and social programs budget that allowed for the first wage increase nursing home and long-term care workers had seen since 2008. While this represented an important step in ensuring care workers are fairly compensated, the bulk of the increase was directed toward nursing homes, leaving only a very small amount for the many services that aim to assist people with disabilities and older adults within their own communities.

This session, a broad coalition of advocates are working on the 5% Campaign – an initiative to secure a 5% rate increase for Home and Community Based Services (HCBS) during the 2014 legislative session.

The Campaign is based on the premise that “life in the community is the first and best option for people with disabilities and older Minnesotans, as well as their families, workers and our state as a whole.” This assertion reflects the changing nature of care in Minnesota – while nursing homes once served as a long-term care option for many Minnesotans, they are increasingly being used only for recuperation, rehabilitation, and end of life care. In 2002, the average length of stay in a nursing home in Minnesota was 502 days; by 2006, it was 298 days, and by 2012, it had fallen to 150 days. At the same time, the number of HCBS participants has steadily increased: there were 30,174 Medicaid HCBS waivers in 2003; in 2013, there were approximately 71,597. Relative to the U.S. as a whole, Minnesota has a high proportion of HCBS participants.

This shift from segregated, institutional settings to integrated, community settings is no accident–the state has played a key role in facilitating it in recognition of the personal and statewide benefits associated with community-based care. Minnesota’s Olmstead Plan, which arose in response to the U.S. Supreme Court’s ruling that states must offer services to people with disabilities in the most integrated setting possible, is a recent example. The Olmstead Subcabinet “strives to ensure that Minnesotans with disabilities will have the opportunity, both now and in the future, to live close to their families and friends, to live more independently, to engage in productive employment and to participate in community life.”

Home and Community Based Services are central to achieving this mandate. Such services include the Elderly Waiver Program, the Community Alternatives for Disabled Individuals, the Brain Injury waiver, the Community Alternative Care waiver, and a state-funded Alternative Care Program. These programs serve a significant portion of the population. In 2011, 10.1% of Minnesotans had disabilities, with some regional variations: the highest rates of disability (14%) were in the northern and western parts of the state, while the lowest rate (8%) was in the Twin Cities.

And in Minnesota, as in many other parts of the world, a significant demographic shift is underway that will ultimately leave us with a higher proportion of elderly people than ever before. By 2030, 25% of Minnesotans will be over the age of 65, and many of them will live alone. In particular, the number of people 85 and over will increase dramatically. 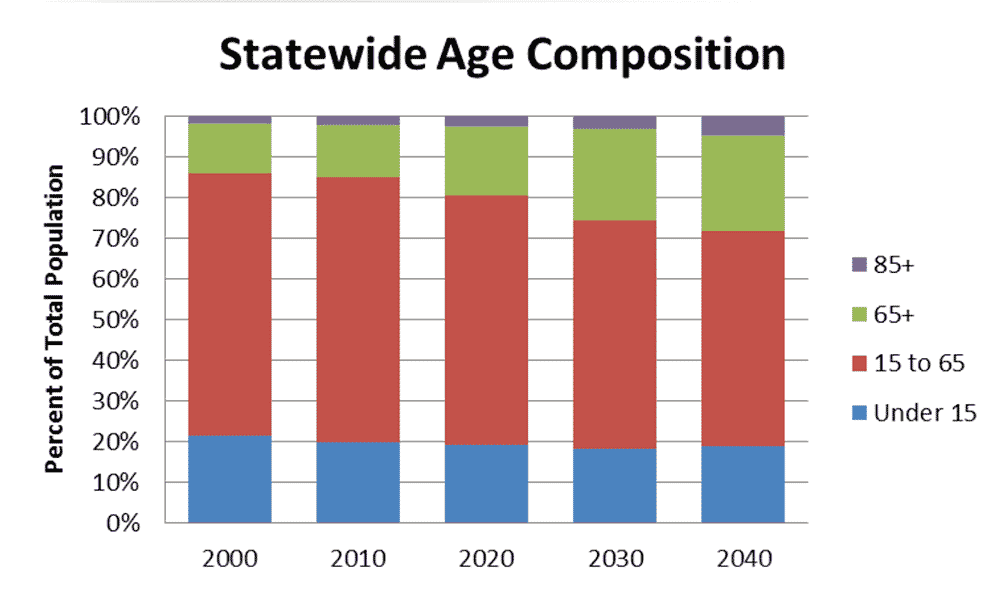 This “graying” of the population has significant policy implications; chief among them is the need to ensure that effective long-term care programs are in place. Programs that keep older Minnesotans in their own communities allow these individuals to retain a sense of independence and maintain a higher quality of life. This not only enriches the diversity of our communities – it also decreases the cost of care: in 2011, the cost of a Home Health Aid ranged from $44,000 to $68,000, while a private room in a nursing home cost $70,000 to $102,000.

But the individual, communal, and statewide benefits of long term-care in integrated community settings simply can’t be achieved without the contributions of care workers. There are currently approximately 90,880 caregivers and staff who serve 67,000 people with disabilities and 24,900 older adults in assisted living facilities, developmental achievement centers, group homes, and their own homes. These workers make an average of $10.50/hr – such low salaries make it difficult to attract and retain workers, and the sector is currently characterized by high turnover rates, which aren’t good for workers or the people they care for. Increasing wages will make it possible for more workers to consider care work a viable, long-term career. The 5% rate increase for HCBS the Campaign is working for would cost about $83 million, and would translate into approximately $0.40 more per hour for each worker.

Sarah Lewerenz, the Political & Legislative Coordinator at AFSCME Council 65, stresses the importance of the 5% Campaign in noting that “many of the non-nursing home direct care employees are paid out of the state budget and are paid incredibly poorly.” Current wages are so low that some full-time employees are unable to afford basic necessities, including food and housing. “It is an outrage that we as a state think it is OK to compensate these workers at such poverty rates,” says Lewerenz. She says the legislative leadership has an obligation to ameliorate conditions for long-term care workers – one she hopes they will honor this session.

And so far, there is every indication they will. According to Arc Minnesota’s Senior Policy Director Steve Larson, who is one of the co-chairs of the 5% Campaign, the initiative’s bill has broad-based bipartisan support, and has been faring very well during the legislative session. The Governor recently released a supplemental budget proposal that includes a 4% increase for community-based care services. Larson says the campaign’s supporters are grateful to the Governor for making this the one area in Health and Human Services that will receive a funding increase this year, but they remain hopeful legislators will be willing to grant the full 5% increase.

Larson characterizes the 5% Campaign and efforts to raise the minimum wage to $9.50 as “parallel campaigns,” but emphasizes that the 5% Campaign is a distinct endeavor. If an overall wage increase is approved, it won’t be funded from whatever increase ends up being secured through the Campaign. There has been good news on this front as well: the Health and Human Services Committee recently approved an amendment to the bill that would provide the funding necessary to bump long-term care facility employees up to the new minimum wage.

These are welcome developments, as they indicate lawmakers are beginning to acknowledge and value the work of long-term caregivers – work that will only increase in importance as our population ages. As Lewerenz says, the state has been providing needed services to the most vulnerable members of our communities on the backs of care workers for far too long. It’s time for that to change. A 4% increase is a good start, but let’s make it 5%.