Communications major and neighborhood renter Ben Elling and a friend enjoy a warm spring afternoon Tuesday in the vacant lot on the corner of Eighth Avenue and Fourth Street SE. A new apartment complex has been proposed for the site. (Photos by Mark Van Cleave)

An empty plot of land in the Marcy-Holmes neighborhood could soon be filled by an apartment building.

The Minneapolis Heritage Preservation Commission discussed plans for a five-story, 57-unit apartment building Tuesday to be constructed on the now-vacant lot at the corner of Fourth Street and Eighth Avenue where the Andrew-Riverside Presbyterian Church used to sit.

One of the church’s stone walls collapsed in 2002, forcing the congregation to relocate to the YMCA on University Avenue. The city told the church that it would have to demolish or rebuild it, which would have cost $2 million, said Harry Maghakian, pastor of the church.

The building was demolished in 2003.

Designed by College Property Management, which owns numerous properties near the University of Minnesota, the proposed plan will lease a corner on the first floor of the building to the church in exchange for rights to the land.

The church would only pay for maintenance costs in its corner of the building, and the lease would last 99 years.

“It will not be a big fancy church building,” Maghakian said. “It will be enough for the sanctuary and for special services for students.”

The original church was built in 1890. The new location will be a significant change from the old gray stone building, but Maghakian said the church is excited to return to the neighborhood. 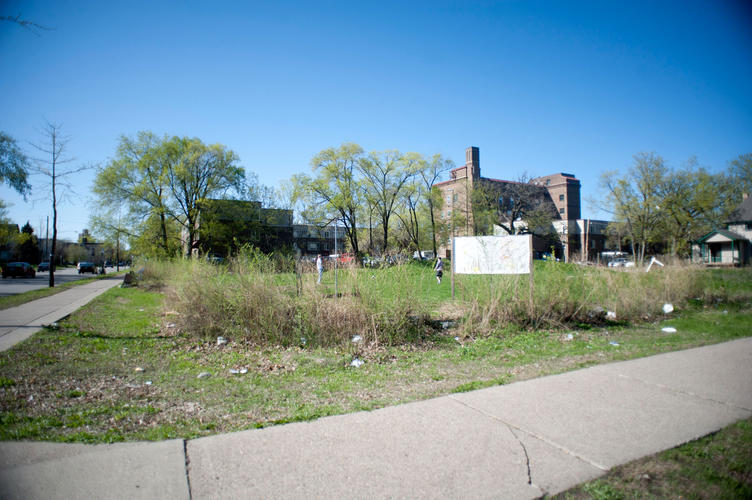 The site at Eighth Avenue and Fourth Street SE was the home of Andrew-Riverside Presbyterian Church until 2002 when a wall collapsed. The building was demolished in 2003.

The association sent a letter to the heritage commission supporting the proposed plan.

The lot is located in the Fifth Street Southeast Historic District, so CPM and the church must meet design guidelines. They have met numerous times with neighborhood associations and city officials to design a building that “blends in” with the neighborhood’s history.

John Smoley, a Minneapolis city planner who oversees the project, said the building should complement the character of the district but not look exactly like other historical buildings.

“Ideally, new construction doesn’t jump out at you and allows you to focus on the historic buildings first,” Smoley said.

The heritage commission had few suggestions for CPM about the building’s design at the meeting Tuesday, and Smoley said he expects the plan to move forward.

CPM will need to return to the city with an official proposal before getting final approval for the apartment building.

Daniel Oberpriller, president of CPM, said while they’re excited for the project, the process has been frustrating at times.

“We all came together to make this happen,” he said. “It’s just been difficult to get something done with all the parties involved.”

The company is also developing a set of townhomes across the street.

Students will naturally make up a large amount of tenants because of the proximity to the University, Oberpriller said, but he predicted that other residents would likely live there as well.

He said the developer was happy to reach a deal with the church and predicted that other churches will likely follow suit in the future because it will become too expensive to pay for the large and inefficient buildings.

“As the community changes,” Maghakian said, “the city changes, culture changes; religious bodies will have to find other options.”