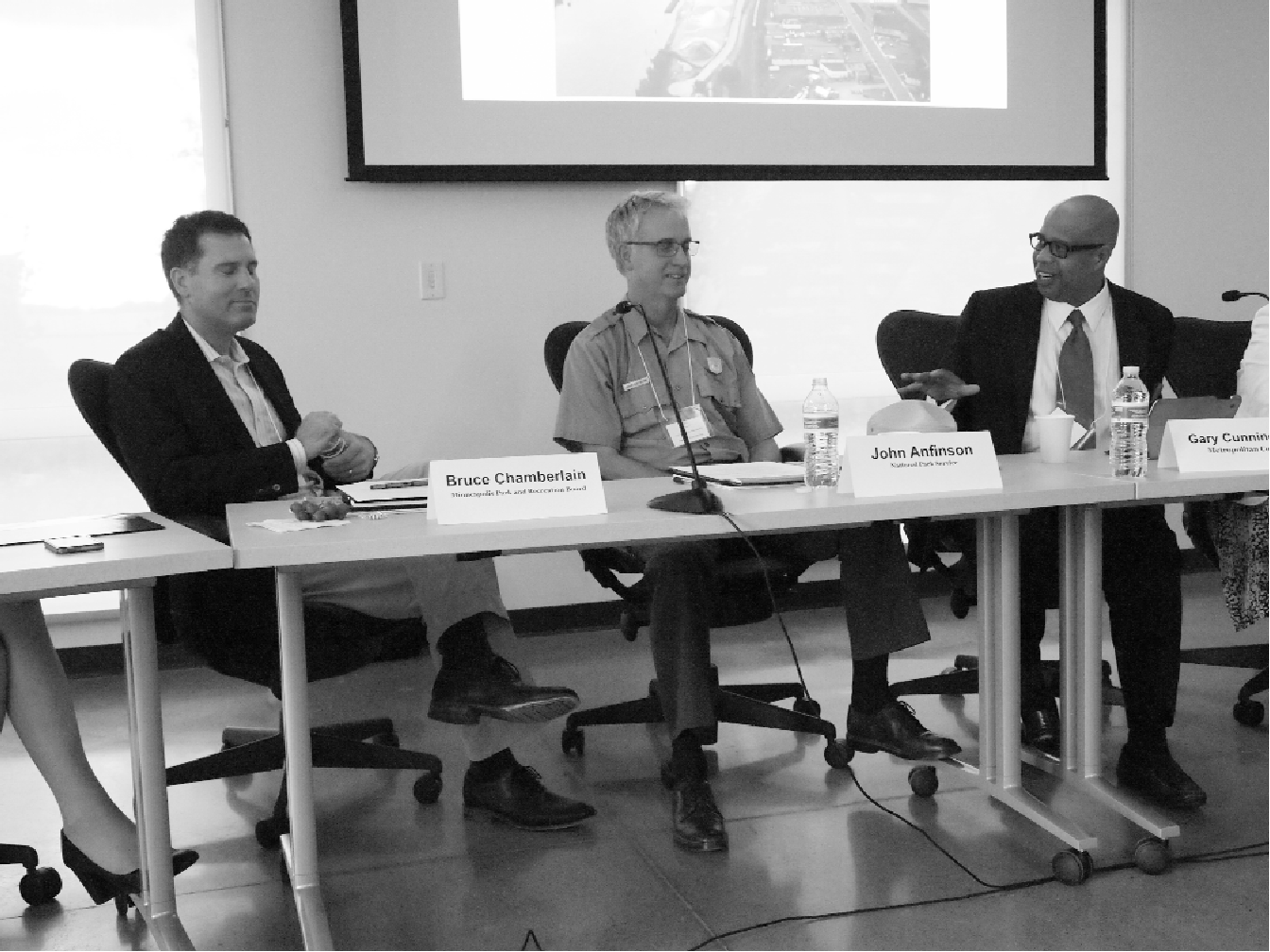 With the City of Minneapolis getting out of the shipping business at this year’s end, development staff are gearing up to offer the Upper Harbor site to businesses in partnership with parks, hoping they’ll hire Northside residents. And one private developer asked them to think about long-term leasing instead, since “nothing is forever.”

A panel of seven got together July 24 to share their perspectives on the future of land that lies between Lowry and the Camden Bridge, concentrated near Dowling and Washington. The meeting was at the Mississippi Watershed Management Organization’s facility, 2522 Marshall St. NE. In the audience; elected officials, volunteers involved in upper river planning for decades, and other interested parties.

Kristin Guild’s City of Minneapolis business development team will be leading the charge. Consultants from HKGI are already doing a technical study to recommend how to fit everything in. It’s the largest site to come available in some time, but it still has its limits. She expects this opportunity to help create the 1,000 jobs a year goal to help North Minneapolis reduce its unemployment rate of 20 percent in some areas, when the national rate is about four percent.

Speakers agreed, they see the value of developing park land not only to the direct public benefit, but as an amenity that will help attract and keep good staff at the adjacent businesses. Linda Mack, Minneapolis Riverfront Partnership (the sponsoring organization) president, set the stage saying the dramatic redevelopment of the central riverfront, the area near downtown, set the bar high for making sure the Above the Falls area reclaims connections to the riverfront for all.

The Upper Harbor area is cut off by the I94 freeway, Washington Avenue, Second Street, high-voltage power lines and a working rail line, all beneficial connections for businesses, as Kit Richardson put it. So there’s a big challenge to create connections going the other way, west to east from neighborhood to river.

Kjersti Monson from the City of Minneapolis added a planning department perspective, introducing the idea of “business park” designation “which will be different from what business park means in the suburbs,” but hasn’t been written yet. It will cover being a jobs center and include hospitality uses. “The next steps will be more public engagement,” she said.

As Bruce Chamberlain, Assistant Superintendent for the Minneapolis Park and Recreation Board, introduced himself, he started a chain of remarks from remaining speakers about who’s had the longest, strongest connection to the river. He’s been involved in planning efforts for the river for 12 years, and sees the biggest challenge being finding the right balance so the businesses and parks will leverage each other.

John Anfinson is the National Park Service person, urging everyone to think about creating elements that are worthy of this river area’s national park designation. The Mississippi Watershed Management Organization’s office building, for example, doubles as a working laboratory and learning center for water management practices. “We have 401 units of national parks, and they include a lot of different things.”

Gary Cunningham, the area’s Metropolitan Council representative, said “count me in,” and brought greetings of support from his wife, Minneapolis Mayor Betsy Hodges. He said that the concentration of poverty that now exists in North Minneapolis dates back to the 1930s when “we chose to place all of the affordable housing in one area” and covenants affecting various peoples were common throughout the city.

He used to fish for carp in the Mississippi at age 8 or 9. Cunningham wrapped up by quoting from the Met Council’s THRIVE MSP 2040 plan document, a regional development framework, directing that a “metrowide inventory and analysis” should determine that demand and available workforce be aligned. “That language puts a premium on this space.”

State Representative Diane Loeffler said the river, to this person who grew up in Northeast, was always “something you crossed.” She encouraged us to “not expect anything less than the central riverfront,” to start dreaming big, and to establish accountability and goals.

“There are models, the city captured return on investment in retaining some ownership of the Hilton hotel. Coloplast is an example of what we don’t want,” Loeffler said. “The return was less, there are fewer employees there now than before the development, there were huge subsidies and the environment was degraded. There’s green grass that attracts geese but no birds or butterflies. An isolated campus with no eyes on the street, and if there hadn’t been a $600,000 cap on their penalty, it would have been over $2 million,” which would have gone a long way to improve the environment.

Kit Richardson’s perspective on the river ranges from having walked the length of the Thames in England, to having bought the North Star Mill in 1979 and the Standard Mill which is now the Whitney Hotel. The Standard had been a meat rendering plant where the air was visibly thick with fat droplets.

He offered a perspective from the Coloplast siting; that the proximity to downtown was key to them choosing the river site. The benefit of the Upper Harbor site is its commercial connectedness.

In audience questions, Sue Pilarski said residential development would pay four times the taxes paid by business, why not build housing on the river? Officials answered that the Above the Falls Plan revision was done during the recession and housing crisis and that even though the emphasis on business came from city staff, those in the private sector who were engaged agreed that it would be a long time if ever, before housing would be feasible.

Marty Schirber offered a “crazy” idea to make the area a North Beal Street replicating a New Orleans jazz hospitality scene; if not that, some other crazy thinking will be needed, he said. “Do the same thing as always, you’ll get the same results.”

Loeffler promoted having an event center with a river view. Supreme Marine’s owner said he would like to have something to look over that isn’t just flat roofs. There were comments about river views, which because of the flat topography, aren’t easy to find. Council Member Barb Johnson noted that 315 Lowry, a public housing high rise, has one of the best.

A resident from the Bassett Creek Valley area challenged, “why does the park board want more land when they can’t even maintain what it has?” Chamberlain answered that this is a rare opportunity similar to that created by the visionaries of five generations ago who acquired the land in the current park system. It will be “used as a catalyst for where the city is going. And to answer the question, we simply need more money,” Chamberlain said.

Developer Richardson, listening to the audience discussion, offered the idea that the city should consider using master leases, ground leases, similar to what’s used along other waterfront; the coasts and in Hawaii. “They’d have to be for 50 or 100 years, since a developer would have to be able to finance the building. But this would begin to address the future, to maximize…because nothing is forever. Perhaps this is a way for the city to leverage its ownership,” rather than selling it away.