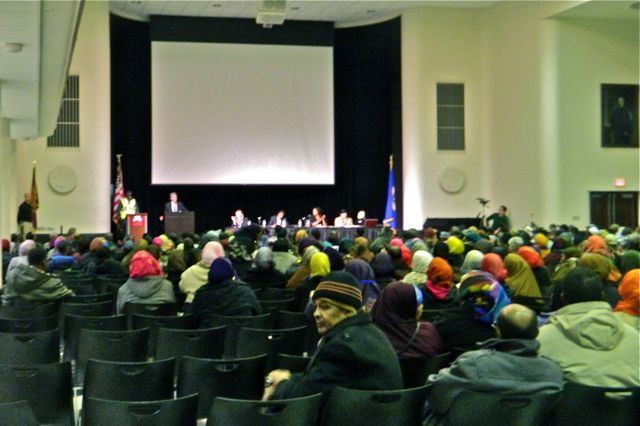 Excitement filled the air as 432 people gathered to resume the Minneapolis precinct caucus that was previously suspended because of a fight. The University of Minnesota’s Coffman Union comfortably hosted the large attendence. Mohamud Noor, a local school board member is challenging Phyllis Kahn for her seat on the House of Representatives. Phyllis Kahn has been the local representative since 1972. Local Somali people were both serious and celebratory, dressing up for the occasion. 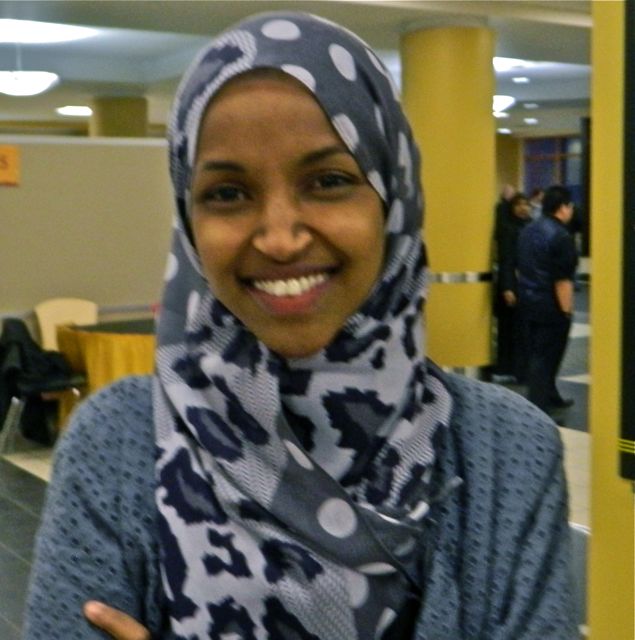 Buses were used to ensure easy and economical transport. To ensure fairness, outside help was used to facilitate and check credentials. Since residency in the precinct had been a major concern, all attendees were asked to bring the same proof of residency that voting requires. Everyone else was asked to watch in the visitor area which then filled to maximum capacity. Fifty DFL volunteers came from outside the area to ensure a courteous, speedy and accurate registration. Multiple official translators were provided in colored vests. Four tables provided help filling out registration with translation. Five tables provided the actual registration check. I saw only a one person try to register who was not in the area. Everyone could relax knowing that all rules were being rigorously followed and that official translators were providing the correct information. The perception of fairness is important!

Of course, since a fight had suspended the previous precinct meeting, there was a high media presence looking for an “exciting” story to tell. It was just Democracy in action, just speechmaking and voting. Although to be overly cautious, Minneapolis police watched from the sideline and the DFL had specific security designated people on the floor. I think Somali people should be justifiably proud of their efforts. I think a few bad actors should not color the picture. A balanced news coverage would show perspective. Just remind the Republicans that they have elected officials who get into fights, fully armed with guns, while just purchasing a car.

The DFL is long used to controversy, so we know how to handle it. The difficulty was that this controversy was at the precinct level, when resources are stretched thin to cover all precincts. In reconvening this precinct caucus with the proper support, the story changed from controversy to pride. All the outsiders were smiling, proud that we have this many DFL people who care in one precinct. The SD60 vice chair, Ilhan Omar, pictured to the right, was smiling throughout the process. She was also the one who was hurt when the fight broke out. Ilhan Omar says she “really appreciates all the outpouring of support from our DFL friends”. 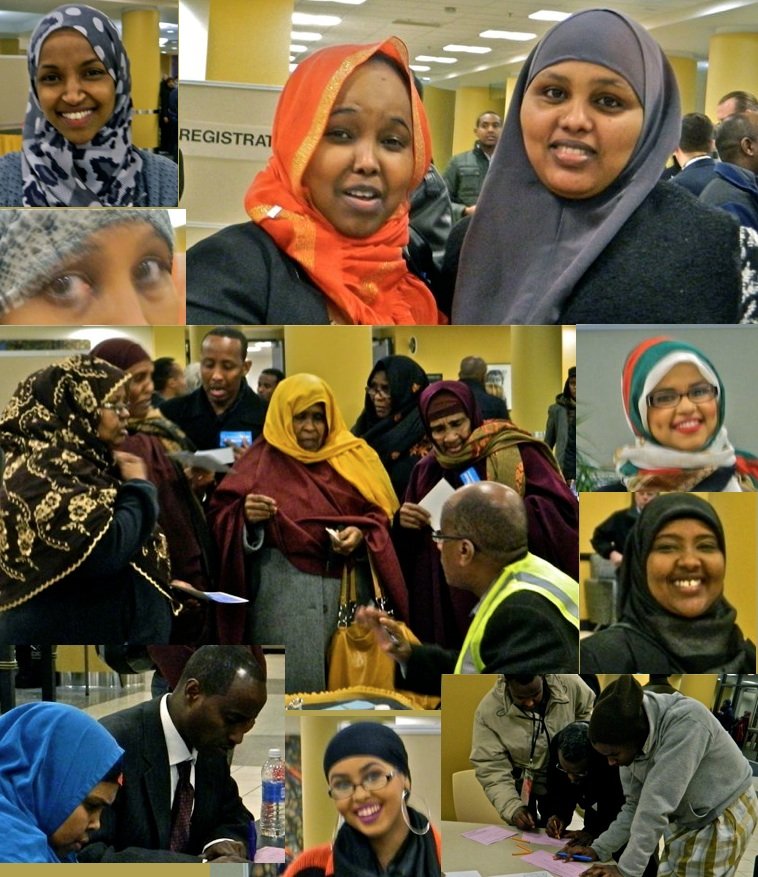 The usual speeches began the precinct caucus meeting, except it looked like a major convention not a precinct caucus. There was a vote and a discussion about how to subcaucus. A subcaucus is a mini-meeting where there is enough people to elect at least one delegate to the next level. A subcaucus process protects minority representation so a majority cannot take over all the delegates. After voting and discussion, four caucuses were nominated. Three of those caucuses merged. At the end, there was basically only two subcaucuses, the Kahn subcaucus and the Nohr subcaucus. Delegates were assigned to the next level proportionally according to the numbers in each subcaucus. 416 of the 432 registered people participated in the voting. The Nohr subcaucus had 270 people earning them 28 delegates and 28 alternates, split evenly between male and female representation. The Kahn subcaucus had 146 people earning them 15 delegates and 15 alternates. Due to the uneven numbers, there were 8 female delegate spots and 7 male delegate spots, with alternates similarly split.

The truth is that precinct attendance in the DFL varies greatly according to controversy. Now there are other precincts in the same voting area, where one only had to show an interest to get a delegate spot to the endorsing convention. In my area, there is a open position in 64B that drew large attendance in all precincts, although not in the 400 person range. During the Obama precinct caucuses, my own precinct had over 600 registered attendees, while the adjoining Macalaster college precinct had over a 1000. During off years with no controversy, the numbers drop to more like 14. Most people had the small number experience this year.

At the end of the night, we have to all be impressed when 432 people care enough to be active at the precinct level. That is awesome!