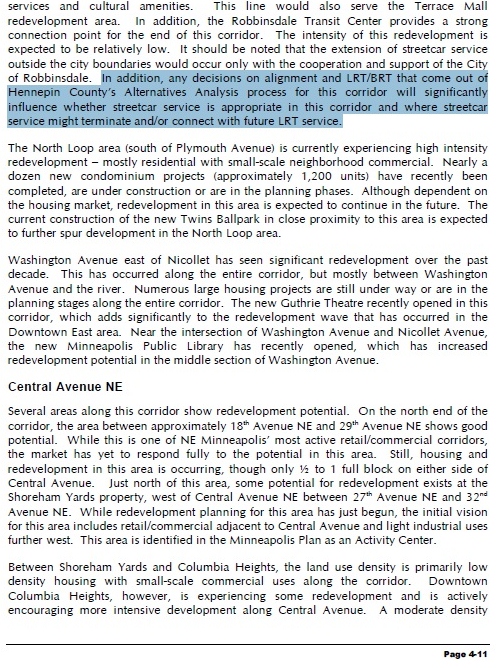 At last month’s meeting to discuss possible LRT routes along Penn or Oliver as alternatives to the “D1” route that would go through Theo Wirth to Highway 55, I asked a very specific question of our moderators. How would the various D2 options affect the proposed streetcar alignment along West Broadway?

After all, numerous streetcar corridors were proposed and only a few were approved. The approval process was based on some rather objective criteria, such as cost and total ridership. The streetcar route along West Broadway would go from downtown up Washington to Broadway, and then up to the Robbinsdale Transit Center. If light rail comes down Broadway to Penn, then the proposed streetcar line would presumably stop at that intersection. And if that were to happen, then the ridership on the streetcars could drop to a point where the Broadway alignment no longer qualifies.

Aside from the appropriate preservation of housing, my other main desire for LRT in or around NoMi is that we don’t eliminate other viable transit network options. So when I asked Bobby Joe Champion and Ray Dehn whether the D2 routes would affect streetcar proposals at all, and if so then how, their answer was, “No.” LRT at Penn and Broadway wouldn’t affect the long-term feasibility of a West Broadway streetcar alignment. I was unsatisfied with this response, so I kept on digging. On page 4-11 of the final report, it states:

I’ve been generally impressed with how Champion and Dehn have run meetings in NoMi, so this shouldn’t be construed as any kind of a “gotcha” moment. They certainly have more knowledge of the issue than I’ve got. But I asked a pointed question in a public setting and further research seems to indicate that the answer I got was not entirely accurate. It’s only fair to publish the correct information here for people to review.

If LRT does indeed take away transit options and gut a community while adding at most one stop in NoMi, I would contend that the D2 routes are simply not worth the costs.