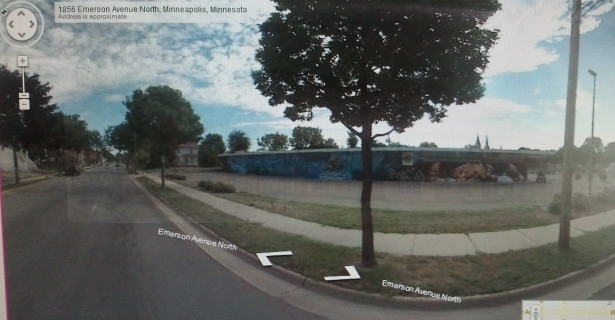 Last year, the Plymouth Church Neighborhood Foundation proposed a 48-unit building on the site of their property at 18th and Emerson. Many neighbors in the immediate area were incensed at the inappropriate size of the development, as was I. To PCNF’s credit, they continued to engage the community, adjusted their plans at least slightly, and proposed a Community Benefits Agreement. After a community meeting, the NRRC board supported that CBA by a vote of 9-2.

There are still concerns raised over the scope of this project, and whether it fits with the neighborhood as a whole. PCNF did reduce the number of units from 48 down to 41, and agreed to fewer stories on site at the ends of the building, so that it would step down to surrounding properties on the block. I wanted to see how the building would fit though. So with permission from a PCNF staff person, I used their updated site rendering (the one that appeared to have the most support at the meeting) and layered it onto Google Maps.

Admittedly, it’s hard to get a sense of how the building fits or doesn’t fit with these pictures alone, as the maps don’t show what’s across the street. Furthermore, it should go without saying that the site plan as it’s layered above may not coincide with the actual location of the structure. But it’s about as good of an image as anyone’s produced. 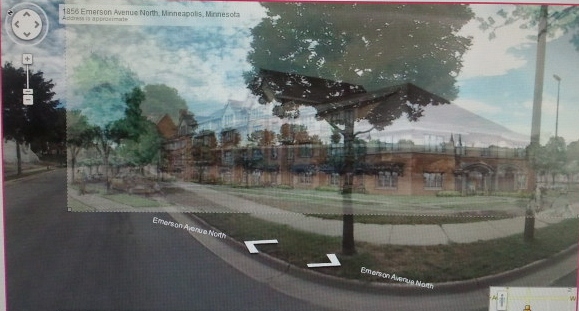 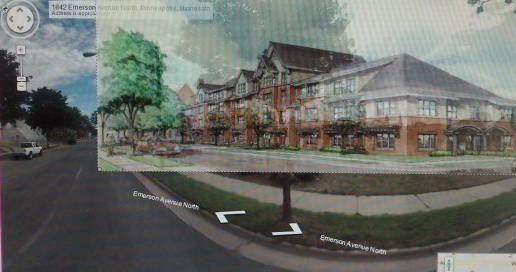 So even though the NRRC board approved the CBA rather convincingly, I still have mixed feelings about the scale of the project. First and foremost, it’s quite possible that the reduction of units brings PCNF well within any zoning requirements – unlike at the 48-unit level where there was some dispute about that. If PCNF does squeak in under the required zoning, there may not be much anyone can or should do to stop them from putting up a building that they are legally allowed to construct. But the overall size still threatens to dwarf surrounding structures and still seems to lack adequate green space for children and families. With the old North Library about to finish its rehab, I do believe it is important to make sure that whatever structures lie to the south of that building are lower in height than the library.

Cost is another serious concern. It was repeated several times at the public meeting that this building will cost about $250,000 per unit to construct. And yet we can build some pretty cutting-edge, green-certified homes for that price and then sell them for at least $150,000. And look, it’s obvious that the funding for such housing doesn’t come in the form of a blank check to be used however we want. On the other hand, caving to what may be a flawed funding structure feels like someone is saying, “But if we don’t spend the money unwisely, we won’t get to spend it at all!”

That being said, there was significant support from the community for this proposal at the UROC public meeting. Although I remained somewhat unconvinced, I sought out the perspective of someone I trust who lives in the area and is in support of the project. We talked at some length about the need for housing and how this building would help to fill that need. While it’s true that we could build or rehab homes for significantly less per unit, a lot of people aren’t ready for that kind of living yet. Furthermore, north Minneapolis does lack quality, affordable, higher-density housing units like this one.

Now I didn’t really need someone else to tell me about the need for such housing over north. Over the past few months, quite a few people have approached me and expressed how difficult it is for them to find good rental housing in our community. They worship, work, or shop here, and want to live here but there just isn’t the kind of housing available that they need right now. And since the last census, north Minneapolis lost roughly 7,700 residents. Adding this kind of density helps the community recover as well.

More importantly to the people in need of housing, when they can’t get the kind of housing they need here in north, where do they go? They are going outside of our community, or to a shelter, or to a relative’s couch, or to the slumlord who is the only one providing them with housing that is remotely affordable. An apartment complex like the one proposed does have the potential of addressing housing problems in north Minneapolis on several levels. I am hopeful that PCNF can do so while adhering to community standards. Their first proposal fell short of that. The current designs show significant improvements in that regard, as evidenced by the NRRC support. With a Community Benefits Agreement, there is a much better chance that the project can be done right.