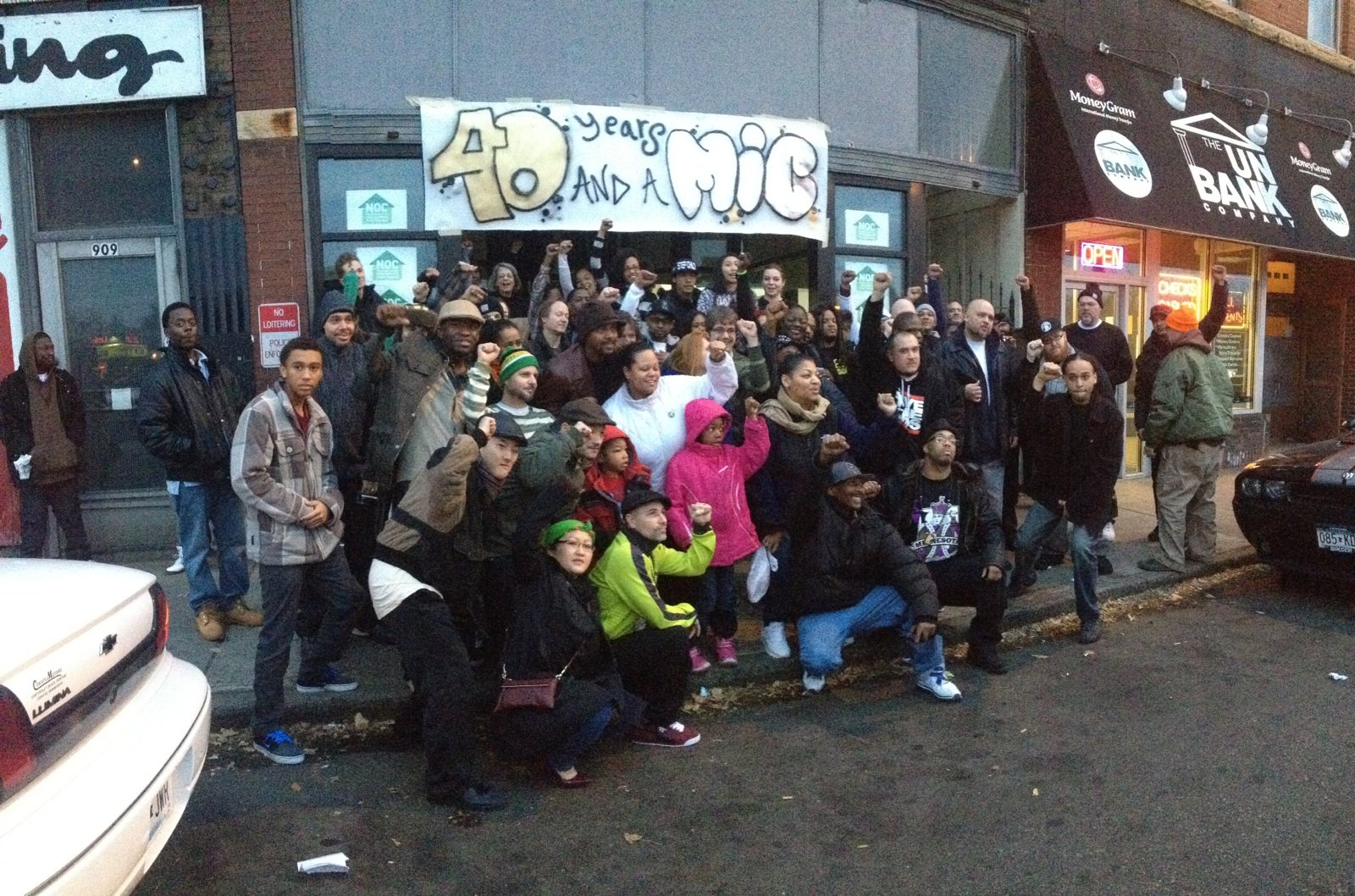 “Hip hop is the streets’ alternative to disco. Hip hop was a grassroots, streets came from—it came from desperation. Hip hop came from people’s basic need for an outlet. We were either going to start hip hop or start a revolution.” – Grandmaster Caz (From the film, “Mambo to Hip Hop”)

What is the future of hip hop? Hip hop is currently at an exciting and pivotal time. Record companies have less influence as we move into a digital era where anyone who creates music can host it online and be downloaded. The playing field for those who create music is changing quickly, but what about the essence of hip hop? What is going to happen to the aspect of the culture rooted in social change and resistance? To quote Ms. Lutunji from a panel on hip hop last week, “How are we going to come together to respectfully challenge injustices and make [our societies] better?” This was the inspiration for Raees Romero when organizing ‘40 Years and a Mic’, a documentary screening and panel discussion on the state of hip hop today.This year marks the 40th anniversary of hip hop. To honor this, Save the Kids hosted a discussion open to the public around hip-hop and hip hop activism with some of the most prestigious names in Twin Cities hip hop. It began with a screening of the documentary ‘From Mambo to Hip-Hop: A South Bronx Tale,’ followed by a panel discussion. The event concluded with a b-boy/-girl cypher and the opportunity for the audience members to socialize. The main goals of the event, stated by lead organizer Romero, was “to get people thinking about how we can help each other [create unity and growth] and use hip hop as a way or tool to do so. I also wanted the youth to not only learn about the history of hip-hop as a whole, but from a Twin Cities perspective.”

Three questions were posed to the panel, each having their own theme: justice, oppression, and culture. Panelists were allotted five minutes to respond to a question, if they chose to do so, with the final 30 minutes devoted to comments and questions from the audience. (Questions can be found at the event page.) The panel was comprised of ten local hip hop artists: Brother Ali, DJ Stage ONE, DJ Dan Speak, Kevin Beacham, Jason Noer, Glo Pesci, Desdamona Rox, Lutunji Abram “Ms. Lutunji”, Freddy Fresh, and Truth Maze. Travis Lee was the eleventh panelist, but was unable to make it due to travel delays.

Unfortunately, due to time constraints and the number of panelists, it was difficult for a cohesive discussion to take place around the themes of the set questions. However, it was very powerful to hear all of the panelists talk about different areas and expertise they each are bringing to community development—especially education.

It would have also been nice to see youth representation on the panel. While one of the main objectives of the event was for youth to learn from our local elders, this often perpetuates the idea that learning is done top-down. The conversation around the future of hip hop would have been much stronger and more well-rounded had there been representation of the future of hip hop on the panel. It is important for our communities to respect and learn from our elders, but by not including the youth voice we are at risk of continually saying the voices of the youth have no value.

This, however, speaks to much of what the panelists spoke to during the evening. Everyone spoke to the importance of supporting our youth – whether it be creating positive and supportive educational settings, or by supporting and mentoring our youth in their artistic endeavors. To quote Gio Pesco, “It can’t be a liberation movement if you don’t give an individual an opportunity to see themselves as greater than they are…allow individuals to be great. If you think Nas is good, wait until you find what is inside of you.”