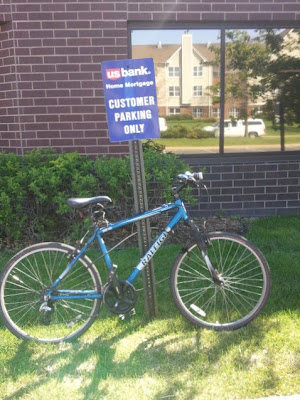 During the month of April, I decided to take the 30 Days of Biking challenge. The goal of the challenge was to bike at least once a day for the 30 days of the month. The bike trip could be something as short and insignificant as a 30-second trip around the block, but participants pledged to do at least that. I admit, there were times when that was precisely what I did. This is the season of hockey playoffs after all. So on two or three occasions, I slipped out during a commercial break and biked around the half-block of a pocket park in front of the house where I currently live.

Most of the time, however, I was a much more diligent bicyclist. I set out to do as much as I could on two wheels instead of four. I logged everything on Runkeeper so I could keep track of my bike usage. I biked a total of 89 times, for a total of 153.9 miles. With the old gas guzzler of a car I’m driving until it croaks on me, I saved roughly $50-60. My phone application also tracks elevation, and said I climbed about 7,154 feet – higher than all but fifteen of the high points in each state. Minnesota’s highest point from sea level, Eagle Mountain, is roughly 2,300 feet.

What had me most excited though was the series of trips I made by bike while I took steps towards closing on my home. I dropped off mortgage documents locally, for a five-mile round trip, biked eight miles to and from my home buyer education course, made numerous trips to and from the house while it is being rehabbed, and even got in a sixteen-mile round trip to Roseville to sign some documents. The only homebuying errand I did by car was to pick out lighting, and that was because someone else came along to who has much better interior design acumen. I’ll hopefully close within the month, and I plan on taking a Nice Ride to and from the closing.

The median length of my trips was 0.97 miles, and only four times did I bike longer than five miles. Once again, this underscored how little we really need cars to get around. But the one issue I really couldn’t get past was the sweat. Biking for more than a mile or two meant that I would be sweating noticeably by the time I arrived at my destination, and on more than one occasion, that destination was for a professional event at which sweating profusely was frowned upon. What to do?

Well, I could bring along a change of clothes so that I was slightly less sweaty but visibly more wrinkly. I could arrive early and give myself time to cool down. I could go out and buy these specialty outfits meant to whisk the sweat away from the body, but does anybody really want to see me in bike shorts? I thought about advocating for lower societal standards around personal hygiene, but seeing as how I wouldn’t want that to apply to anyone else, that idea is out of the picture. Or I could just go at a slower pace, but that’s honestly the least realistic option out there for me.

Ultimately, I may just take a page out of the Superheroes’ Best Practices Manual (Vol. 4, rev. 2010), which states: “With the rise of handheld telephone devices, phone booths with adequate space to change clothes have seen a marked decline in the past decade. We are now advised to keep numerous outfits in well-concealed, strategic locations throughout the city – optimally both formal and, for lack of a better term, informal wear. [This] facilitates a quick change into appropriate attire for any occasion.”

Unless anybody’s got a better idea, that is.

After the thirty days were over, something else surprised me. I took a day or two off from bicycling, and something just felt…off. Getting behind the wheel of a car to drive short distances felt out of place for me.

If one of the “30 Days” goals was to change people’s preconceived notions about how often they need a car, then consider it a success for me.