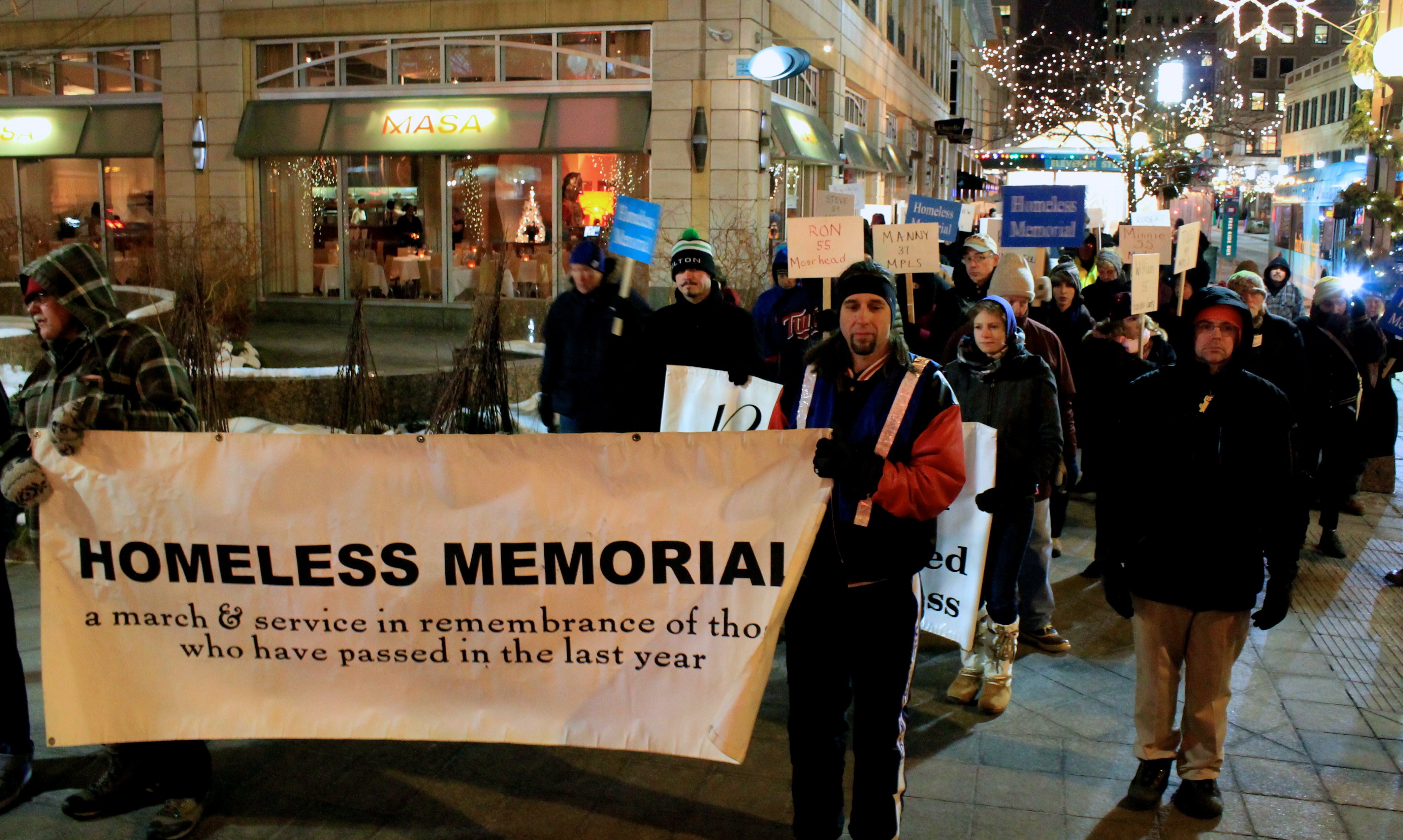 Minnesota homeless people who died during 2013 were remembered in a December 19 march and vigil in Minneapolis. Nearly 300 people marched 28 blocks through downtown Minneapolis in 15-degree temperatures, carrying the names of Minnesota’s homeless who passed away this year.

“We hold the annual march to honor and remember, in this case, 147 people who generally are not memorialized at the time of their passing,” said Stephen Horsfield, the director of Simpson Housing Services, which helped organize the event.  “We want to bring some dignity to the lives of the people and the people who remember them and also call attention to the issue.”

People of all ages, gathered outside the Hennepin County Government Center to pick up signs provided by the organizers, with the name, age and hometown of those to be remembered.  Then, silently, they walked west to Nicollet Avenue and followed it south to the Simpson Overnight Center on 1st Avenue for the memorial service.

“[Homelessness] has touched my life,” said Theo Park, a pastor at the Gethsemane Episcopal Church, who was part of the march.  “I’ve always lived indoors but I’ve served in shelters with men living rough.  I see it on the doorstep of my church.”

“I always say being an advocate means actually showing up [even if its cold],” Park continued.

While there has been a lot of progress made over the last few years providing affordable housing and moving homeless people off the streets and out of shelters, homelessness remains a persistent challenge.

According to a 2012 study by the Amherst H. Wilder Foundation, prospects for future improvement are not great.  Minnesota has seen a steady rise in homelessness since the early 90s and almost half of an estimated 14,000 homeless people now are under the age of 21.

Horsfield cited a lack of healthcare and support for mental health and chemical dependency treatmetn, and too big a gap between economic opportunity and housing costs as systemic failures.  Lack of educational programs is a problem, too, especially for the young people, he said.

The average age of those who die while homeless is in their mid-40s.

“Even when its as cold as it was last night there will still be a couple hundred, I’d say 200-300, who stay outside,” said Horsfield.  “We’ve seen our shelters overcrowded or over capacity for the last three years.”

“Exposure is a cause of death,” he continued.  “But it happens in the winter and the summer equally.  The cold just brings the issue onto the radar.”

The memorial began in 1984, when a homeless Vietnam veteran who frequented the Simpson Men’s Shelter was found beaten to death nearby.  The staff had frequently witnessed those struggling with homelessness die without anyone honoring their life, and were moved to hold service in remembrance of the fallen vet.

Upon hearing of the service, the Minnesota Coalition for the Homeless proposed it become a bigger event and every year since the MCH and Simpson Housing Services have collaborated to make it happen.

“I think that it is amazing to be able to conduct services like this, that share the value we hold in the belief of individual autonomy and the dignity of the person,” said Horsfield.  “But at the same time it’s depressing we lost these people this year and that there are thousands more suffering out there now.”