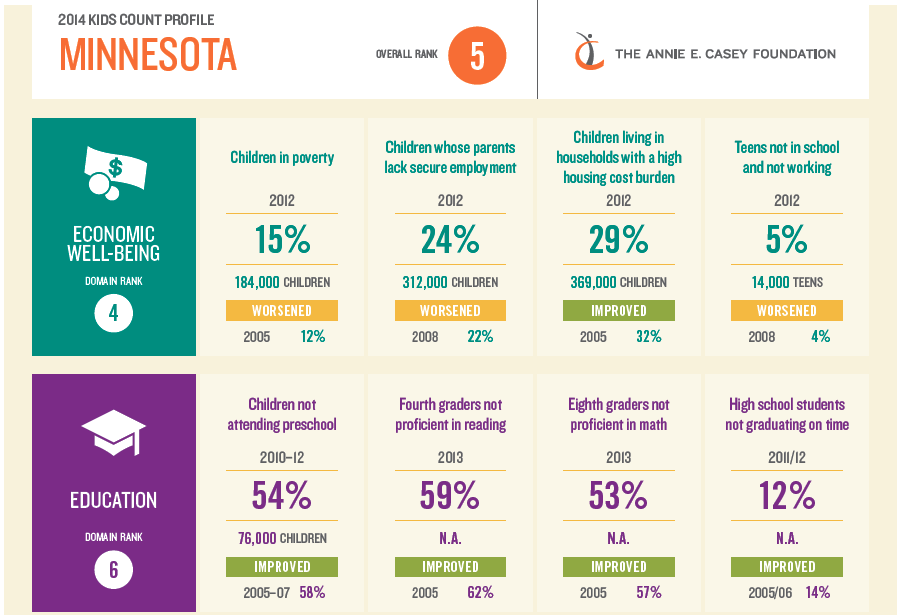 Kids Count 2014 shows expanded access to early childhood programs during the time period, especially for low-income children. Math and reading scores also have increased steadily. So have high school graduation rates. Progress has not been even.

“Although rarely noted, the achievement gap between African-American and white students has declined considerably during the past 50 years. Within that same period, however, the gap in standardized test scores between affluent and low income students in the United States has grown about 40 percent. Indeed, low test scores among our lowest-income students appear to account for America’s mediocre rankings in international comparisons.

“The prevailing narrative about American public education is that it is ‘failing,’ but the reality is that the system serves the most advantaged children quite well, producing some of the highest test scores in the world. As both poverty and wealth have become more concentrated residentially, evidence suggests that school districts and individual schools are becoming increasingly segregated by socioeconomic status.

“Given that in-school factors account for only a third or less of the variation in test scores, we must face the fact that our high child poverty rate constrains our nation’s academic achievement. Schools can make a difference at the margins, but they cannot overcome the vast cognitive and social-emotional development differences between high- and low-income children that are already entrenched by the time kids enter kindergarten.” Kids Count 2014, page 12

Does that mean it’s time to congratulate ourselves for narrowing the racial achievement gap? Not at all.

“[The] harsh reality [is] that too many of our country’s children of color begin their lives with multiple disadvantages. They are more likely than their white peers to be born into poverty and to fragile families; they are more likely to grow up in communities where poverty is concentrated, jobs are scarce and violence is prevalent.

“Because of residential segregation by race and class, many children of color attend neighborhood schools that are poorly funded and overcrowded. Under such conditions, education — which we, as a nation, deeply cherish as the great equalizer — simply exacerbates inequality … ” Kids Count 2014, page 14

Minnesota is, of course, above average. We rank fifth in the nation in overall child well-being. Minnesota is also above average in racial disparities — and that’s our shameful failure. Nearly half the black children in Minnesota live in poverty, compared to eight percent of white children. You can go to the Kids Count Data Center and find lots of numbers. The Minnesota Children’s Defense Fund press release summarizes:

“Looking back at the last 25 years of data on Minnesota children it is evident that investments in children, like funding for early childhood education and access to health care, improved outcomes for children and our state as a whole. Since 1990 we have come to better understand how to give children a good start and ensure successful passage into adulthood. It’s crucial to our state and nation’s economy that we take what we have learned to ensure future investments in programs and policies that help all children succeed.”