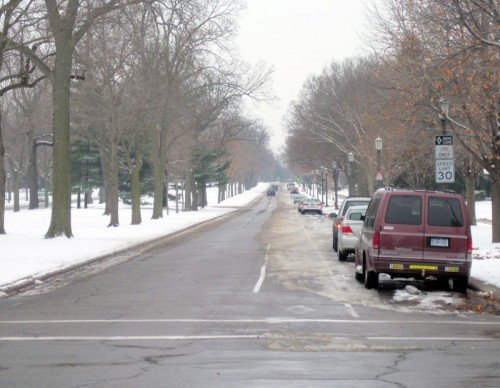 As a citizen cyclist, AKA utilitarian cyclist, A to B cyclist, commuter, I gladly embraced the task of reporting and commenting on:

The Best Place for Utilitarian Pedaling

With 45 respondents (in the survey game we call this the n size) the results are as follows:

I’m going to take one at a time and offer a critique from a seasoned – well, at lease well worn cyclist.

Are you kidding? Whenever out-of-towners come to St. Paul – where we live – we always take them on a short tour of Summit Ave. Mostly by bike if we can or on foot. It is arguably the most beautiful street in the Twin Cities. There is a painted bike path that runs the length of the avenue from the River to John Ireland Blvd. The lane left for the motorists is wide enough that it seems to encourage speeds in excess of the 30 mph posted. Fully half of the bike lane is threatened by doors opening as it rests in the door zone. So what do we have here? We are clearly using bicycles to protect the parked cars from those that are moving. Does that make sense on any level?

In winter…. Don’t get me started. Whilst plow crews vow to plow curb to curb, the parked cars slowly invade the bike lane as winter progresses. Also, as the bike lane is outside the realm of the cars’ needs for passing, it is almost always covered in ice or snow. At some of the major intersections they will pile up snow for the season where? The bike lane.

I ride this often from work at the Nice Ride Minnesota World HQ to Downtown Minneapolis. It’s useful, fast, and for the most part, separated from cars. The 24% clearly have used this pathway and appreciate the safety, speed, and convenience.

In the winter the city does a good job of keeping the trail clean and though cyclists share it with pedestrians, it’s wide enough to accommodate both.

In 2010, when the mall became legal for cyclists it represented a big leap in north south movement within Downtown. I ride it all the time and there are two problems: The buses stink (in spite of best efforts to the contrary) and the lights are timed so cyclists have to stop at every corner, often behind the stinky buses.

What’s so irksome is that riding the mall is a constant reminder of how traffic planning decisions are made with the car in mind first and cyclists, significantly down the list.

The city would do well to make it easy for cyclists to traverse this street as they will stop and buy goods more readily than motorists who can’t drive on the mall, and whose primary goal is to get out of Dodge.

I find this interesting as it’s parallel to the Light Rail Trail and only a few blocks away. The Light Rail Trail is an easy move across the city but there is no retail along the trail. Minnehaha boasts plenty of places for coffee, food, drink, local shopping and a community feel. I like this choice.

Now the rant: As Hennepin County plans the re-design of this road, they are missing the opportunity – strongly promoted by residents and neighbors – to create a protected cycle track. Instead they have opted for a painted lane. See Summit Avenue above. Since 2005, miles driven per capita are falling. Why do we pretend it will continue to grow at pre-1995 rates?

With one vote each, Cedar Lake and “Other” don’t seem to demand comment.

Permit me to place my vote late and here. Midtown Greenway. I work on the greenway near the east end so I ride it almost every day year ‘round. It is undisputedly (ok dispute if you want) the fastest way along the East West spine adjacent to Lake Street. It is our very own Bike Freeway!

Bike Freeway has little meaning except for the fact that it has co-opted the hallmark of the American motorist experience, the interstate freeway system. It says, “Now we cyclists have a freeway too”. The Greenway is an easy, fast, smooth, sometimes a little risky byway.

There are many ways for us to get around by bike in our fair cities. These are but a few.