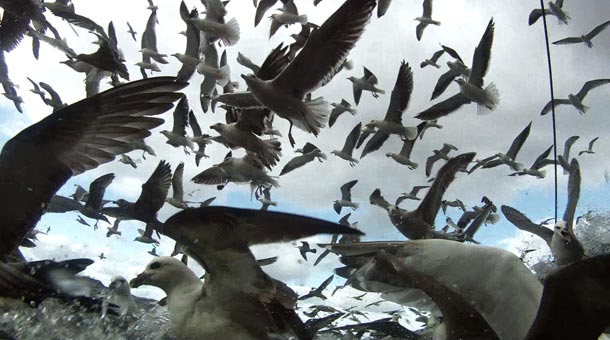 When I reported a few weeks ago that spring was on its way and the temperatures were on the rise and we could start expecting seeing green grass, I was way off. There was further proof that winter was sticking around a little longer for the opening night of the 2013 annual Minneapolis/St. Paul International Film Festival. It was snowing.

Nevertheless, at the theater over the festival’s opening weekend, the crowds were lining up waiting patiently for films to start, grabbing concessions, talking with another about what they had seen, and herding into different theaters looking for a new discovery with a film from Mexico, Germany, Spain, France, or the U.S.: the festival was in full stride and ready for its close-up.

After skipping the opening night film, my festival did not start until the following day at one of its first matinee screenings; it was a thrilling encounter. I took in the pseudo-documentary Leviathan by directors Lucien Castaing-Taylor and Verena Paravel. Exploring the film medium in abstract conventions, Taylor and Paravel used dozens of cameras equipped to the commercial fishing boat heading out on the Northern Atlantic with the fishermen catching fish, slicing and dicing them; the filmmakers also submerged cameras underneath the water with the tides crashing and splashing out from the boat and seagulls flying out at sea. In one spectacular image, the cameras capture the birds flying upside down in the black sea at night. An amazing portrayal of survival and a way of life, not only for the fishermen constantly working but from from every vantage point, Leviathan becomes one of hell of an adventure.

Still buzzed from Leviathan, I was extremely excited to catch co-directors Joao Pedro Rodrigues’s and Joao Rui Guerra da Mata’s hybrid fiction/documentary Portuguese film The Last Time I Saw Macao, which I had been reading rave reviews of for months. It was downplayed at the festival due to the fact it is a tough film to describe (and promote), but one that proved memorable. When the film’s unseen narrator journeys from Portugal to Macao to help a friend in trouble from an underground mafia, our narrator struggles to connect with his friend Candy who is in some danger; at every turn, the puzzle keeps getting more complex. Opening the film with the entertaining song “Macao” by Jane Russell, inspired by the Josef von Sternberg film, where our thoughts are transfixed on the singer lip-synching singing the song, The Last Time I Saw Macao never makes it easy for the viewer to know exactly what is happening, but somehow your imagination can be stronger than anything believed on screen.

Breathtaking scenery and a stylish setting makes this film beautiful eye candy; it also never loses grip of its intentions. It’s too bad that the newly installed DCP projectors at St. Anthony Main lost their grip on keeping the English subtitles onscreen—halfway through the film, I felt in I needed to hone up on my Portuguese skills when the subtitles disappeared and left many in the audience asking what was going on. After a short delay, the subtitles were back in place, but the snafu did take me out of a delightful ride of mystical and unexpected feelings.

The last film I saw over opening weekend was artist/director Jem Cohen’s affecting and subtle personal film, Museum Hours. Using Vienna as a backdrop to the story was completely moving and wonderful; however, it did lose some stream near the end. When Anne (terrifically played by artist/singer Mary Margaret O’Hara) travels from Montreal to Vienna to visit a friend in the hospital, she finds solace in one of the museum guards Johann (Bobby Sommer) and the two quickly become friends. Johann starts talking about the museum to Anne and suddenly the Kunsthistorisches Art Museum becomes another character showcasing its history and its important work between the two of them, while Anne explores the city for its cultural and history. Cohen’s visuals in Museum Hours are worth the price of admission alone, and riding along with both Anne and Johann, felt like a personal tour of through a city, a country, a museum unlike any guided tour. Cohen finds a singular and expressive feeling of excitement throughout; realizing every day of our lives could be a bit mundane, Museum Hours splendidly soars through his immaculate lens and acute perfection. (Second screening: Thursday, April 18 at 9:30 p.m.)

Here are a few highlights to look forward to in the end of the first week and moving into the second week of MSPIFF.

In the Fog, directed by Sergei Loznitsa, brings a more straightforward narrative then his previous film, the excellent My Joy, delivering another gripping tale of a man trapped in WWII captured by the Germans once he escaped the gallows after sabotaging train tracks is now confronted with his own death in the woods until he is left with his own uncertainly once he is spared. (Wednesday, April 17 at 6:45 p.m. and Tuesday, April 23 at 4:30 p.m.)

American Heart, directed by Chris Newberry, a Minnesota-made documentary on health care clinics dealing with individuals facing life-threatening situations, where doctors are even, surprised by their conditions once they meet them. (Thursday, April 18 at 6:30 p.m.)  Mr. Newberry will be present at the screening.

Harry Dean Stanton: Partly Fiction, directed by Sophie Huber, documents the career of actor and singer Harry Dean Stanton, who at 86 is still going strong. Featured in over 200 films, Stanton talks about his life in film and music and gives a sensational background about his 60+ year career, mostly as a supporting player until his big break in Wim Wenders’s Paris, Texas (1984). The documentary features Sam Shepard, David Lynch (in a hilarious interview in Stanton’s apartment), and Debbie Harry with a story you will not believe. (Friday, April 19 at 9:35 p.m.) Ms. Huber will be present at the screening.