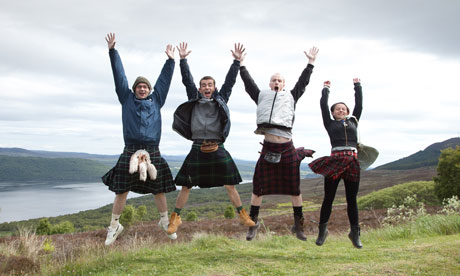 This week The Film Society of Minneapolis/St. Paul made its first big announcement about the upcoming Minneapolis/St. Paul International Film Festival (MSPIFF), which opens Thursday, April 11 and runs through Sunday, April 28, 2013, at St. Anthony Main. One of the biggest cultural events in the Midwest, MSPIFF will screen over 200 international, American independent feature length and short films, narratives and documentaries representing over 60 countries.

The opening night film, The Angel’s Share, the newest feature from acclaimed English director Ken Loach (Kes, Hidden Agenda, The Wind That Shakes The Barley) won a Jury Prize at the Cannes Film Festival last year. The Angel’s Share is “a bittersweet comedy of a young Scottish father determined to turn over a new leaf and forge a better life for himself and his son.” Tickets for the opening night celebration will go sale to the Film Society members only, starting next Wednesday, March 13, for $40—which will also include admission into the opening night party at the Aster Café. Tickets will be available to the general public for $50, on or before April 1.

“The festival allows you to see many non-commercial films you’d never otherwise have access to,” said Susan Smoluchowski, executive director of the Film Society of Minneapolis/St. Paul, in a press release. “We give the community a rare chance to see these works on the big screen.”

In the same press release, Minneapolis mayor R. T. Rybak added, “The Minneapolis/St. Paul International Film Festival is one of the signature annual events that makes our city a great place to live, work, and visit, and solidifies our much deserved reputation as one of America’s greatest cultural destinations.”

Some of the new program highlights include Oscar Submissions in the Best Foreign Film Category. “These films will feature submitted for considerations for the 2013 Oscars that have not previously been screened in regional theaters.”

The category Songs of Exile: Cinema of Displacement and Dispossession will feature a selection of new independent globally documentaries and narrative films, “focusing through fresh and contrasting perspectives, on an age-old predicament: the movement of displacement—either geographical, cultural or psychological—of individuals and peoples around the globe. A number of the films featured will represent the new and growing international population in this state.”

Programmed in conjunction with the Minneapolis Institute of Arts exhibition “More Real? Art in the Age of Truthiness” (running March 21 through June 9, 2013), the series More Reel focuses on “documentaries and narrative films that creatively blur boundaries between fact and fiction.”

The ever popular Minnesota-Made section of the festival returns with new films with local connections.

Out of the 65 confirmed films that were announced in the press release, there are plenty to be excited about and many that should whet the appetite of any cinephile in the Twin Cities. Here are some of highlights.

Kon-Tiki, the Oscar-nominated Foreign Language film from Norway, from directors Joachim Roenning and Espen Sandberg (2010’s opening night film, Max Manus), is based on the true story of Thor Heyerdahl and his Kon-Tiki expedition of 1947, crossing 4,300 miles of the Pacific on a wood raft to prove it was possible for South Americans to settle in Polynesia in pre-Columbian times, will be presented in the “Special Presentations” section.

Caesar Must Die, the 2012 Golden Bear winner at the Berlin film festival by legendary Italian directors and sibling’s, Paolo and Vittorio Taviani (The Night of the Shooting Stars and Kaos), will also be presented in the “Special Presentations” section, is a drama about “inmates at a high-security prison in Rome preparing for a public performance of Shakespeare’s Julius Caesar.”

The Hypnotist, a Scandinavian crime drama, by three-time-Oscar-nominated writer/director Lasse Hallstrom (The Cider House Rules, Chocolat, What’s Eating Gilbert Grape) returns to his native Swedish roots for the first time since his 1988 Foreign Language breakout My Life as a Dog. It’s placed in the World Cinema section: “After a young woman and her parents are murdered by a killer determined to wipe out the entire family, a detective works with a psychiatrist to hypnotize the son who narrowly escaped death in order to find the one surviving daughter before the murderer does.”

You Ain’t Seen Nothin’ Yet. French master Alain Resnais (Last Year at Marienbad, Night and Fog, Hiroshima, mon amour) in supposedly his final directed film, is “a who’s-who of French acting royalty being summoned to the reading of a late playwright’s last will and testament. There the playwright appears on a TV screen from beyond the grave and asks his erstwhile collaborators to evaluate a recording of an experimental theater company performing his Eurydice—a play they themselves all appeared in over the years.”

Twenty Feet From Stardom, one of the opening night films at this year’s Sundance Film Festival, is a fantastic and crowd-pleasing documentary featuring “some of the best and most-respected back-up singers in popular music, but we’ve had no idea who these singers are or what lives they lead, until now.”