It’s been a good year, even if it didn’t seem like it. 2013 was the year that the economy turned around just enough to lay the foundation for a better 2014 in several key ways. The most important is that more people have jobs, even if it’s nowhere near enough to make up for the losses from 2008-2010. The other reason is that retail sales are actually picking up and there’s reason to believe that there will be more confidence as we move ahead. The last part is very important because the psychology of a depression is the main reason it has the name it has.

Barataria was very successful in predicting the important trends of the year early on. A summary of the best posts of the year is available in the tab 2013 in Review, if you’d like to rewind the whole year. But here are the economic highlights in a quick summary.

First, there is news. Holiday retail sales came in with a net rise of 2.4% over 2012. That’s not a great number, but it beats the rise of 0.7% in 2012 and 2.0% in 2011. We predicted here that they would be a surprise to the upside and start a stock market rally to end the year. That has apparently happened, as the DJIA rose 122 points on the first news. As we also predicted, Reuters is saying “Stronger consumer spending appeared to push the U.S. economy to accelerate in the second half of the year and most economists expect the momentum will carry over into 2014.” That’s what really matters.

How did retail do so well amid some dire news during the rush? Online shopping gained big – so big, in fact, that UPS wasn’t able to keep up with it. Black Friday, as we know it, has become an extremely unreliable indicator of the holiday retail season. That’s probably the best news of all.

Barataria’s predictions for the entire year were also very accurate. Not only did the total number of jobs increase by 2M through November, the headline unemployment rate finally hit 7.0%. More importantly, the unemployment rate among 20-24 year olds fell from 13.7% to 11.6%, and the gap between this measure of youth unemployment and the overall rate fell from 5.9% to 4.6%. This implies that much of the hiring is occurring among younger less skilled workers, or that companies are willing to make a few investments. That’s the really good news, and it’s shown clearly in this chart where the rate for 2-24 year olds is in blue, the overall in red: 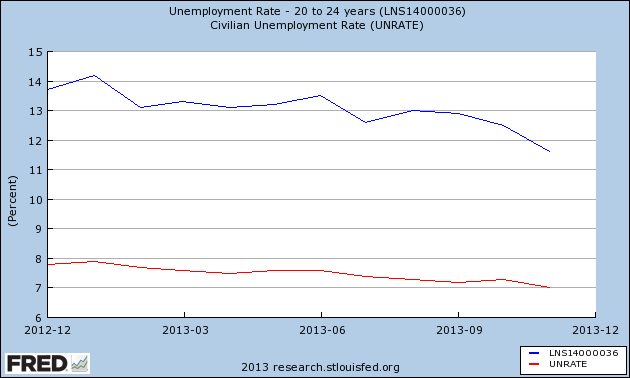 Consumer confidence has indeed stabilized as well, and real estate is positively booming. Corporate profits are up so much that the key question is why they are not being re-invested in the company that made them, a key problem that needs to be resolved in 2014. The year ended pretty much as Barataria expected it would.

What does this mean for 2014? It’s still a bit early to make solid predictions for the coming year, at least without thinking it through some more. But what matters most is that there is a genuine feeling that the worst of the depression, economic and psychological, is lifting.

As this happens we can see the focus among Democrats, at least, shifting away from concerns about growth towards an increase in equity. The gains were just good enough to raise income inequality from the subject no one dared talk about to a genuine platform for the party going into the mid-term elections. As shown by the more rapid increase in youth employment than the overall, there is movement towards equity in the job market already. That is clearly emboldening the left to have a strong position for the first time since this depression started.

What form will that take? There is clear momentum to raise the minimum wage to $10 per hour, as supported by President Obama. That alone is extremely unlikely with the current congress, let alone a more progressive tax code that some are also pushing for. For now we have to consider this to be nothing more than a platform – although a rise in the minimum wage is indeed extremely popular.

It’s also worth noting that the appearance of Pope Francis as a champion of income equity is going to help this cause a lot. How that will play out is the true wild card – but it can’t hurt the Democrats at all.

In short, 2013 was indeed the year we hoped for. The foundation has been laid for a new economy to grow on going into 2014. What we build next is the hard part, but what is needed is something that will serve us beyond the Year Everything Changes in 2017. That’s much harder to predict yet, and we’ll get to it in January.

For now, let’s enjoy the end of the year and get a big bottle of Asti to toast the progress we made. It’s a hopeful time.