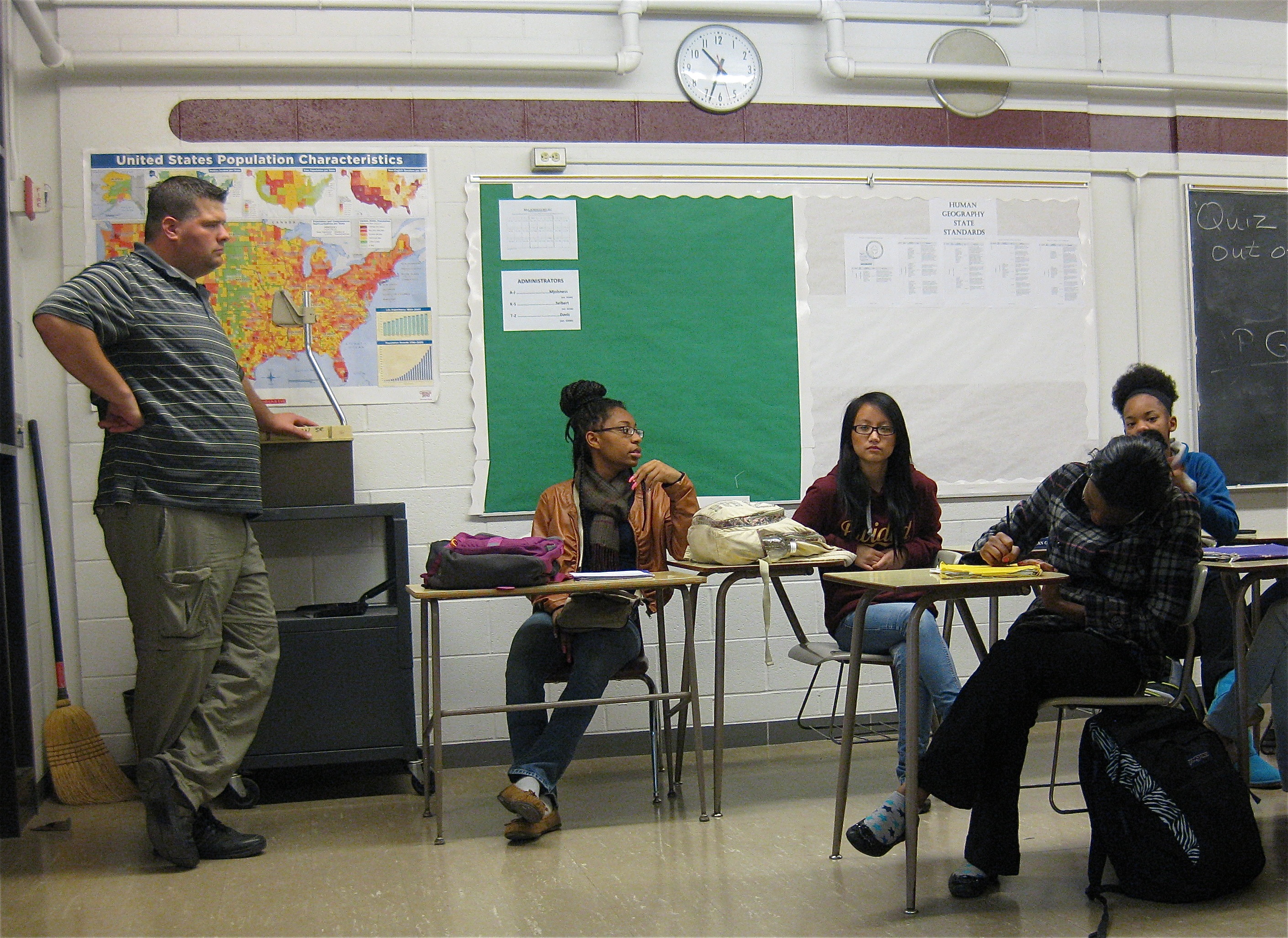 St. Paul Johnson High teacher Logan Kane expected last Friday’s AP Government conversation to be a juicy one. It was a follow-up to another heated discussion that left students condemning their country’s election system.

The topic? The electoral college: an issue so outwardly dry and complex that many adults avoid ever figuring out what it does.

“We were like, ‘What’s going on? Let’s go to the capital and get rid of this electoral college!’ Do you guys still think it’s completely flawed?” Kane asked the class.

“I think we should keep it and try to make it so it’s fair,” said one student. “It’s stable. It’s been working for a while.”

“The electoral college was made up during the 1700s when the constitution was signed,” argued another student. “I don’t see how, with all of our technology, now, and all of our knowledge, we can’t come up with a better system.”

Election years are good ones for social studies teachers and for their students, many of whom are at the threshold of becoming voters and full citizens. Across the Twin Cities, teachers are taking advantage of the opportunity to teach government and citizenship in real time.

Mr. Kane’s class of seniors is a mixed bag of political experience. Kaden Lockhart comes from a home where CNN is always on. Alison Decker volunteers for the Vote No marriage amendment campaign.

“I did not know anything about politics – none of that,” Sabrina Allison said. Mr. Kane’s class convinced her to consider a political science major.

“Now, when we talk about it, I get so fired up and angry,” she said. “I think that more students need this class, so they know what’s going on. People are clueless.”

Across town, at Patrick Henry High in North Minneapolis, students in Brionna Harder’s IB Critical Reading, Evaluation and Writing class debated some of the foundational questions of the nation’s major political parties.

What should the role of the government be in our everyday lives? To what extent should the rich be taxed? And how does trade with China impact our economy?

The activity required small groups of students to sign up to watch a presidential debate, then lead a round-table discussion engaging the rest of the class.

Unlike the opinions they heard in the televised debates, the students’ budding political positions followed their intuition and personal experiences more closely than they followed party lines.

The conversation turned to the military and to plans to pull troops out of Afghanistan.

“I don’t want to be the bad person that says we should keep soldiers away from their families, keep them from coming back to their country and stuff, but I don’t think that we should ever completely leave somewhere when we’ve been at war with someone,” said one student, who would later speak in favor of issues more typically associated with the political left, including abortion rights and allowing same-sex marriages.

“I have something to say about the military being there and getting out. I don’t think we should ever do that again, because that’s why Hmong people are here, because they abandoned us in Vietnam,” said a Hmong student. “That’s why we’re scattered around the world.”

About half the class of 11th-graders will skip school November 6 to work as election judges, where they’ll sign in voters and pass out ballots.

At Avalon school in St. Paul, students attend few classes. Instead, they meet Minnesota standards by completing projects they design and by interning with organizations that interest them.

Isaiah Ripley designed a project that is teaching him how to look for bias in the media. He’s following the marriage amendment in news reports, editorials, podcasts and radio discussions.

The project will culminate in a podcast he produces. Along the way, his teacher Nora Whalen is helping him figure out which details matter and why.

“I read an article yesterday about a pastor… He gives this presentation for people to vote yes on the marriage amendment,” Ripley said. “A lot of backlash happened to him, because in his presentation he relates it to the Holocaust and Hitler.”

“Well this is an interesting issue, because it’s not a Democrat issue and a Republican issue, because it’s an amendment,” Whalen said. “So he’s working for the Vote Yes folks. He’s employed by them, and he’s making statements. Does it get messy when you start connecting your opposition with Hitler?”

“Yeah, because normally if you compare anyone to Hitler, it’s usually quite offensive,” Ripley said.

The marriage issue is personal to Ripley, because he’s gay. The project is forcing him to learn about the arguments posed by the Vote Yes campaign, with which he disagrees.

He’s even gotten his mom interested. Said Ripley, “I don’t think she would have ever voted had I not told her. Now whenever she passes a sign, she comments.”

Lessons on the side

Back in Mr. Kane’s class, the conversation veered off topic, as it does frequently.

The classroom is a safe space where students can ask questions about current event quirks that don’t make sense to them. Some questions lead to answers even adults would benefit from hearing. Others are reminders that today’s schoolkids are coming up in a different time than many of the rest of us.

After watching a debate clip, Mr. Kane talked about the connection between economics and security. “September 11—what did that create?” he asked.

“Yes, but also a recession,” he said. “They didn’t just pick the twin towers, because they’re tall and beautiful. They picked them, because they were the financial centers of the world.”

In Minnesota, students are required to take one half-credit class dedicated solely to citizenship and governance.