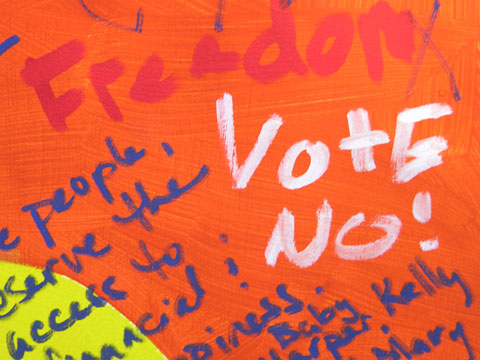 September 29, 2012 and over 4,000 registered to traverse the 5k course. A whole lot of other people stationed volunteer positions, along the route, and as supporters at the finish area. Musicians played and speakers spoke, and all around a festive atmosphere of positive vibrations drenched the gathering.

Some were serious runners, many were leisurely strollers, All were supportive of stopping the passage of an amendment to the Minnesota Constitution that would limit the freedom of marriage.

The serious runners were completing the race course even as some of the crowd of walkers were just beginning to cross the Stone Arch Bridge. The “race” was not one of competition, but of unified expression of everyone’s right to marry the person of their choice, and that discrimination should not be written into our state’s constitution. Here are a few images of a grand party. Vote No, on both amendments this November 6th