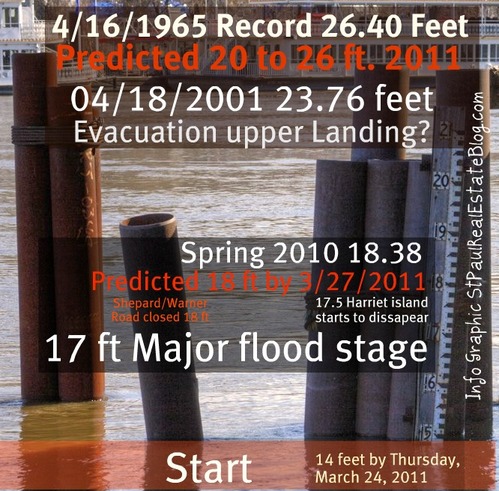 It is the first day of Spring at least according to the calendar and the City of St. Paul declared a state of emergency for what is predicted to be a major flood.  We had record snows this winter and flooding last Fall, and rain predicted for later this week. Perfect conditions for a major flood along the Mississippi River.

There is a 50-50 chance the Mississippi will exceed a level of 26.4 feet, in which case some 2,200 people could be forced to relocate temporarily from Lowertown and the downtown-area Upper Landing riverfront development. The national weather service predicts that the river will reach flood stage by Thursday. [National Weather Service]

This is what the river looked like last year along the upper landing  at almost 15 feet. This picture is when the water last year was at 11 feet which is not considered a major flood.  The white arrow is pointing at the housing on the Upper Landing. It should be an interesting week.