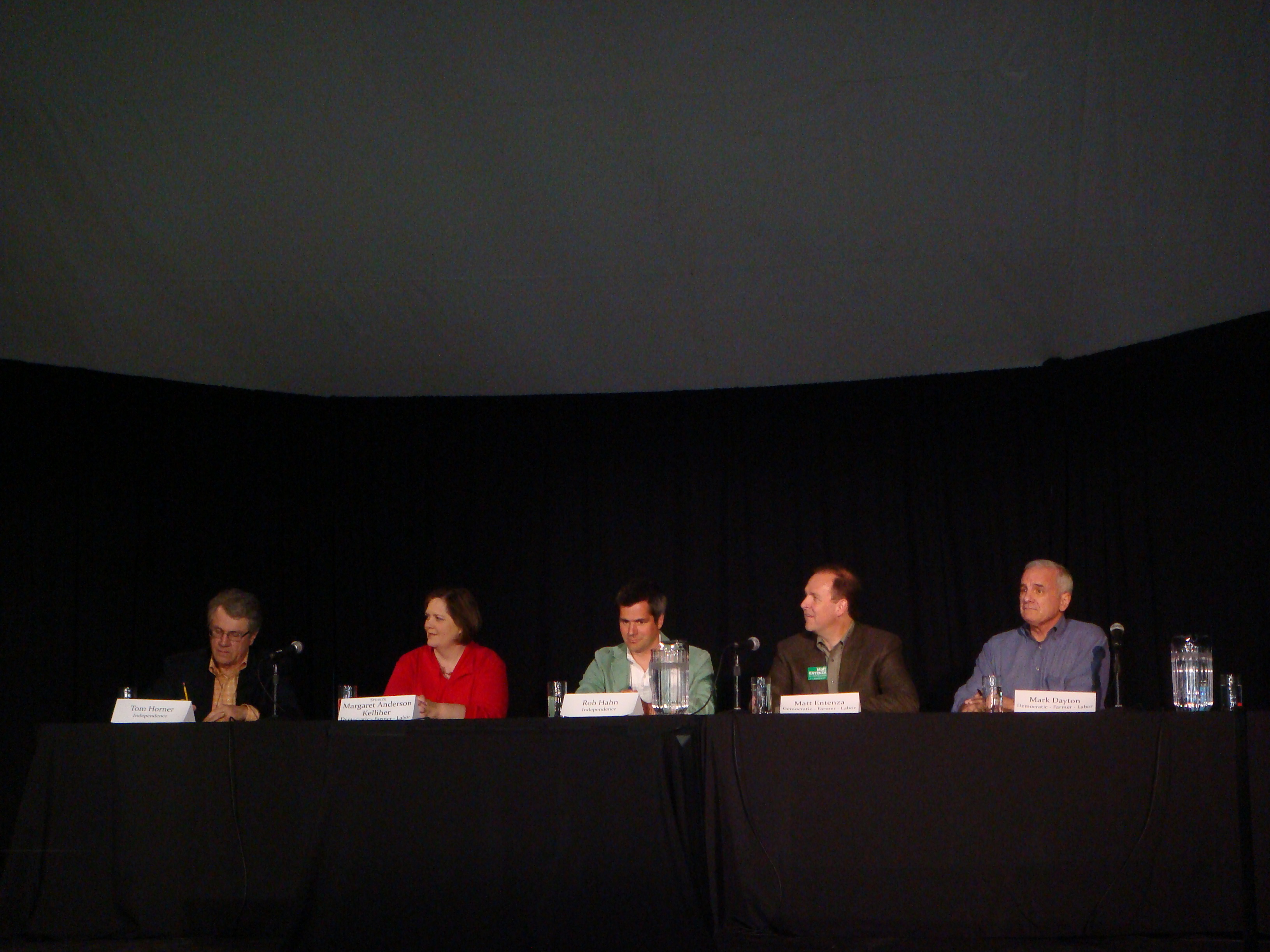 The 2010 Minnesota Gubernatorial Candidates at the environmental forum.

This Sunday marked the first Governor’s Candidate Forum on Clean Energy, Clean Water and Minnesota’s Future at the Minnesota State Fairgrounds in St. Paul, as part of the annual Living Green Expo.

Among those invited were major party candidates who had polled at five percent or higher in straw or statewide polls. Forum participants included: Margaret Anderson Kelliher (DFL), Mark Dayton (DFL), Matt Entenza (DFL), Rob Hahn (I), and Tom Horner (I).

Tom Emmer (R), who received his party’s endorsement last Friday, had been invited to the event, but did not attend.

Kelliher left midway through the event due to a prior commitment to participate in the Mayday Parade, which commenced at 1PM.

The forum began with pre-recorded questions asked by Minnesotans concerned about environmental issues and moved on to Expo-goers’ videotaped questions.

A recurring theme throughout Hahn’s responses was the size of government. “We can’t have a government mandate for everything,” he declared.

Horner, a member of the Minnesota Land Trust, emphasized the need to invest in innovation, reform tax policy, and focus on education, but also stressed the need for limited government. “If we try to do everything, we will end up doing nothing,” he said.

Entenza, an environmental studies major in college, took the opposite approach and proposed government solutions to environmental problems. “I don’t think personal responsibility is going to do the job alone,” he stated. “And as a legislator, I led on environmental issues.”

Kelliher, along with Entenza and Dayton, claimed a hand in the 2007 renewable-energy standards bill. “I have been a champion of protecting our air, water, and land,” she stated. “I am the only candidate to have put green jobs out there.”

“The so-called [Minnesota] Pollution Control Agency has barely tested the waters that we have,” said Entenza.

Both Dayton and Entenza also targeted the noticeably absent Emmer on his stance on environmental issues. “I am disappointed that Tom Emmer is opposed to government’s role in a sustainable energy future,” said Entenza.

Entenza, citing a potential multi-million dollar industry in solar, biomass fuels, geothermal, and wind energy, claimed to put the new clean-energy economy at the core of his agenda. “We need to shift the way that we produce our energy,” he said.

Hahn, however, questioned the practicality of wind farms and proposed to lift the moratorium on nuclear power. He also claimed little knowledge on biofuels and was unsure of his position on a recent proposal by PolyMet Mining’s proposal for a mining operation in Minnesota, instead emphasizing the need to “surround [him]self with great people.”

Entenza and Dayton shared concerns about the proposed mining operation.

When the issue of mass transit came up, Hahn expressed his support for expanding the light rail system. “If you want to upset some republicans, you say ‘I support a railway line to the central corridor’,” he commented.

Horner, however, was not as enthusiastic about expanding the light rail system. “We’re building the Metrodome of light rail transit,” he said. “It takes 45 minutes to get from St. Paul to Minneapolis downtown.”

“We need to have a ten-year plan for transit for the metro and all of Minnesota,” responded Entenza, who claimed that property values would go up along a railway line in the central corridor.

Claiming that Emmer opposed such plans, Entenza accused him of offering a “radical agenda which would cripple our ability to enforce environmental laws.”

And after Entenza called Horner out as “a republican for many, many years,” Horner replied, “The first thing you learn in politics is, if they’re taking shots at you, they’re paying attention to you.”

“Minnesota’s future depends on us moving into the clean energy economy,” concluded Entenza.

The forum was moderated by green-lifestyle expert and author, Kim Carlson, and sponsored by Minnesota-based chain grocery store Supervalu.

This was the first year that the Expo was put together by the Minnesota Environmental Partnership (MEP). In previous years it had been organized by the MPCA. Last year, the event was canceled due to cuts in state funding.

The Expo has the distinction of being the the largest zero-waste event in Minnesota.