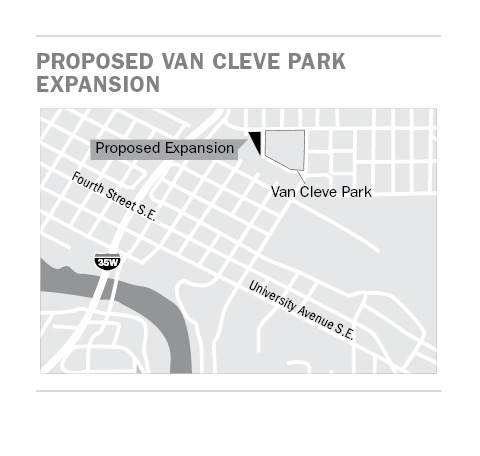 The Southeast Como Improvement Association wants to expand Van Cleve Park and is seeking permission and funding from the Minneapolis Park and Recreation Board.

If the plan goes through, Bunge Tower would be ripped down.

The purpose of the proposal is to make up for space lost when the Minneapolis School District built a new baseball field over the summer. Because the field is only for students, residents of Como don’t have the same amount of space in the park that they used to have.

“What we’ve been hearing from many residents is that they’ve lost a lot of space,” said Lee Hibbard, vice president of SECIA. She said that Van Cleve Park is the only green space the neighborhood has and that more green space is better than more housing.

The expansion proposal eyes the land adjacent to Van Cleve Park that contains the Bunge Tower and old grain silos. The land is owned by Project for Pride in Living.

Hibbard said that if the land were acquired, the tower and the silos would be destroyed and replaced with a soccer field or another baseball field. She estimated the cost would be around $1 million.

Hibbard said the Bunge Tower site is dangerous because there are a lot of broken windows. A University of Minnesota student fell to her death in 2006 after climbing the closed-off tower.

PPL has placed a fence around the area.

SECIA is asking that the Minneapolis Park and Recreation Board pay for the project. MPRB could potentially use Hennepin County funds, Hibbard said.

Jennifer Ringold, manager of public engagement and citywide planning for MPRB, said that right now, the cost of the project is “speculative.”

She said before expanding the park, an appraiser needs to determine the market value of the tower site, the seller,PPL, must be willing and MPRB and Como must make the park expansion a priority.

“It’s not a fly-by-night process,” she said.

Chris Wilson, director of real estate development at PPL, said that right now the land is being used for “nothing.”

He said since PPL completely purchased the property in 2006, the site has gone unused.

“The original plan was to build condos in the buildings that were remaining and sell the area,” he said. Because of the economic downturn, the person who was planning on purchasing the space couldn’t go through with the deal.

Wilson said PPL is considering putting the property on the market, including for the park expansion, or creating studio apartments.