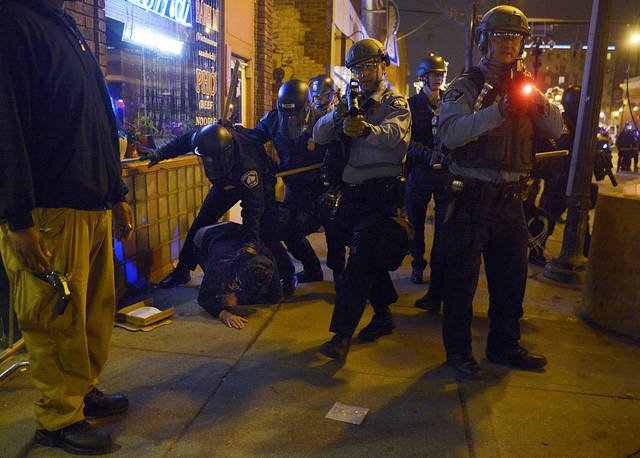 A riotous crowd filled Dinkytown for the second time in three days Saturday, following the Gophers’ loss in the NCAA Frozen Four final.

Behavior was similar to two nights before — when the Gophers men’s hockey team beat North Dakota State in the semifinal — but this time, hundreds of police were waiting.

After police pushed the initial crowd out of Dinkytown, what had escalated into a riot dispersed into skirmishes throughout University of Minnesota-area neighborhoods. Dinkytown was clear by about 1 a.m.

The commotion began quietly, with a hodgepodge group of disappointed fans spilling out of Dinkytown bars.

As the crowd grew, it seemed most were there to watch the action unfold. Some chanted “USA!” and “Let’s go Gophers!” while other went further, jumping on cars and throwing bottles at police.

At least 19 people were arrested, according to Minneapolis police.

Some grasped fistfuls of zip ties and others had nonlethal weapons in hand. They soon began firing into the crowd as a mounted patrol unit advanced and helicopters circled overhead, directing the crowd to disperse.

It’s unclear what police were firing, though it’s possible there was a mix of nonlethal weaponry. Multiple Minnesota Daily reporters were struck.

Even after police directed the crowd to disperse, some refused to leave.

At one point, about a dozen people sat cross-legged in the street, chanting “We have the right to assemble.”

Police disagreed — almost from the beginning of the night, they’d declared the assembly unlawful.

Family social science junior Jon Kleba said he watched the game at Burrito Loco and then walked to a friend’s house. There wasn’t a clear reason to start a raucous in Dinkytown, he said.

“People like to feel they’re a part of something,” he said.

University alumnus Arif Hasan said the situation looked “brutal,” but made “a lot of sense.”

“I feel like a lot of students think they have more rights than they do in a situation like this,” he said.

Around 11:30 p.m., police pushed the crowd away from the center of Dinkytown. On side streets, people lit furniture on fire and destroyed cars.

Some bystanders were caught in the crowd and voiced confusion about how to get home, as police had blocked most major routes out of Dinkytown.

Police armed with nonlethal weapons weaved in and out of alleyways, clearing crowds that had spread into the Marcy-Holmes and Southeast Como neighborhoods.

After Thursday’s commotion, police prepared heavily for Saturday. Before the game ended, hundreds of officers had covered Dinkytown and its surrounding area.

University President Eric Kaler on Friday sent an email warning students that the school had “zero tolerance” for unruly behavior and would arrest bystanders once police declared unlawful assembly.

Minneapolis police sent a release warning if “celebrations escalate into criminal behavior, the MPD will act to ensure public safety and protect property.”

Plooster said he didn’t think Kaler’s email would be effective.

“Not with this many kids,” Limbo said.

The University and Minneapolis Police will have a statement in the morning, he said.