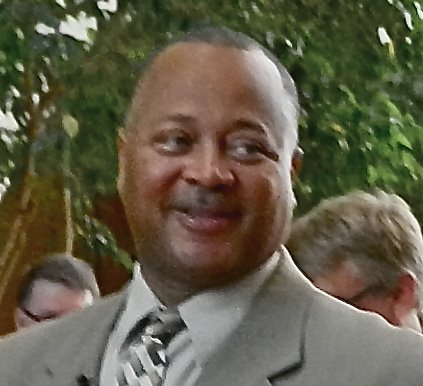 Wow, deputies endorse the new candidate for Hennepin Sheriff, Eddie Frizell, not the incumbent Rich Stanek, by a vote of 170 to 14 votes. There must be some serious reasons because I am sure that endorsing against one’s current boss is a risk. An announcement is expected out soon.

Today, Eddie did his kick off announcement for Hennepin’s County Sheriff. Eddie Frizell is currently Deputy Chief of the Patrol Bureau in Minneapolis, with 25 years experience. He is also a Colonel in the Minnesota Army National Guard for 25 years. He commanded the Red Bull Cavalry Squadron in Iraq. His medals and citations include the Medal of Valor for his heroic efforts during the I-35W bridge collapse. He has a long list of accomplishments.

Frizell suggested three ways that he would be a better sheriff. In contrast to Sheriff Stanek’s “70% increase in administrative costs”, Frizell would shift those expenditures to “boots on the ground” meaning deputies, training, and equipment. Frizell said that he would recruit more diversity in candidates (including veterans) so that Hennepin county staffing reflects the community that it serves. Frizell said that he would be a better leader because he is a “straight shooter” not a “career politician”.

In contrast, based on google searches, Stanek has a history of racism issues, budget issues, and privilege issues. Stanek is better known for being more politician than professional. Having not had a challenger for awhile, now Stanek will now have to defend how he runs the Sheriff’s office.

Eddie Frizell, a highly-decorated veteran of both the Minneapolis Police Department and the U.S. military, announced his candidacy for Hennepin County Sheriff Wednesday.

The 21-year law-enforcement veteran currently holds the rank of Deputy Chief of the Patrol Bureau in Minneapolis. In addition, Frizell has served in the Minnesota Army National Guard for 25 years and holds the rank of Colonel.

Frizell has earned numerous medals and commendations, including the Bronze Star, during his service as commander of a Red Bull Cavalry Squadron in Iraq and Kuwait during Operation New Dawn, and he has received several citations for heroism and outstanding leadership during his years with the MPD. He was awarded the Medal of Valor for his heroic efforts during the I-35W bridge collapse.

“I’m dedicated to returning credibility and integrity to the office of Hennepin County Sheriff,” Frizell said at at news conference at the Hennepin County Government Center. “Sadly, thedepartment is suffering from absentee leadership, and I feel confident I can fill that void.”

“I know the deputies at the Hennepin County Sheriff’s Department are dedicated, gifted police officers who want to be provided with the resources to do their job the best they possibly can,” Frizell said. “I’m committing to providing those resources by applying proven strategies that not only empower officers to apprehend offenders but also help our community reduce crime in the first place.”

Frizell said there are three primary areas he would focus on as sheriff:

“I think fiscal accountability and transparency are critical,” Frizell stressed. “The first thing I’d do as sheriff is take a good hard look at my department’s finances.

Frizell noted that the administrative budget of the Hennepin County Sheriff’s department, from 2012 – 2014, went from about $6 million to more than $12 million.

“I’d really like to know where that extra $6 million is being spent. We have felony warrants in our communities that aren’t being served in a timely manner. Supposedly because of budgetary reasons, these dangerous individuals are not being taken into custody on a regular basis. How you can double an administrative budget over two years and still not have enough money to conduct basic police work is beyond me.”

“Given the diverse communities we live in, I think it’s critical that the any law enforcement office – whether a county sheriff’s department or city police force – should reflect the community that it serves,” Frizell said. I’ve led initiatives in my own department to increase the hiring of under- represented groups, and especially groups like women and veterans. It’s not so much that we need to hire these people just because of the groups they represent, but that fact that we need to work to expand our pool of quality candidates. ”

Frizell noted that some of the best officers he’s served with, including his current boss in Minneapolis, are women. He also feels the military veterans of the Twin Cities are an under- utilized asset.

“It’s been my experience that better gender balance in our law enforcement agencies has had an extremely positive effect on our work,” he said. “Female officers add an important perspective to the job. Furthermore, we have an incredible untapped resource in our military veterans who are returning from overseas. These soldiers have already received excellent training and are equipped with many of the essential tools to become outstanding police officers back here at home.”

The third issue Frizell said needs to be addressed is the lack of confidence that people in the community have of law enforcement agencies.

“In many areas of our Hennepin County, the first time our youth may interact with a sheriff’s deputy is either when he or she is being arrested or when deputies are responding to a significant emotional event in their lives. Community-based policing is not a new concept in law enforcement, and statistics proves it not only helps engage our neighborhoods but, overall, is an extremely effective strategy in reducing crime. Yet for some reason, it these types of programs are not priorities at the sheriff’s department.”

“We have real issues here in Hennepin County, and they’re certainly not going to be solved with a sheriff who’s spending all his time flying around the country,” Frizell said. “As sheriff, I’m not going to play Washington insider. I’m going to be right here at home, protecting our community.”