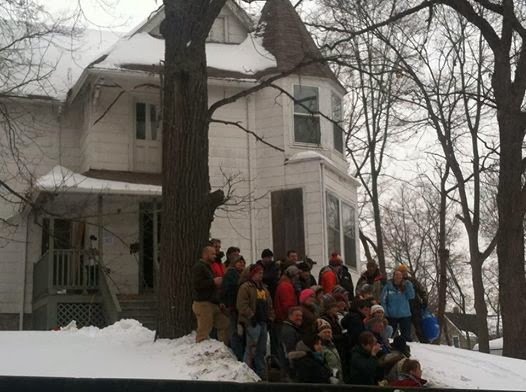 On Saturday, dozens of people from across the Twin Cities–and possibly beyond–converged on 1522 Hillside to do a volunteer clean-up. Growing up in a farming community, the trash-out of the house held similarities to good, old-fashioned barn raisings. What would have been a job taking up at least a full day’s work was instead completed in less than an hour. “Forty-one people in forty-one minutes” was how Nicole Curtis described the task. Most participants had expected to work for a few hours, and others arrived late under the assumption that there would be plenty to do all day long. The final tally was eighty-nine people who came to help.

I got to see the interior of the house for the first time, and it’s quite the labyrinth. The old house lovers did get to “geek out” a bit as we meandered through. The house was originally built as a boarding house, and was chopped up even more since then. Even some changes appeared to be made a long time ago but still well after the original construction. Unless you know what you’re looking at, it can be hard to tell what parts of the house were from 1890 and what came fifteen years later. The last owner’s slummy additions are not hard to pick out at all, and will hopefully be almost as easy to remove.

There will be numerous blog posts in the coming weeks about the unique history and architecture of this gem. For now, those are being discussed primarily on the Old North Minneapolis and TP Healy Facebook pages. But what kept running through my mind was this:

Eighty-nine people, most from outside north Minneapolis, showed up to clean out a house, and did so during one of the coldest winters in recent memory. Granted, almost all came at least in part because of the celebrity status of Nicole Curtis. But that tells me that we should have no problem whatsoever finding ten or twenty members of our own community to help out like this with other rehab projects. Whether the volunteering is done with a private developer or a local non-profit like Urban Homeworks or PPL, the northside has a wealth of caring residents who are eager to roll up their sleeves and help our community.

And I bet that Ms. Curtis would lend her star power with a tweet or Facebook post to spread the word that volunteers are needed at certain times. When running the numbers for whether to consider rehab or demolition, one of the questions that should be asked from now on is what can volunteers do to reduce costs and speed up the process. Because as we saw at 1522 Hillside, the answer is that they can do a hell of a lot.