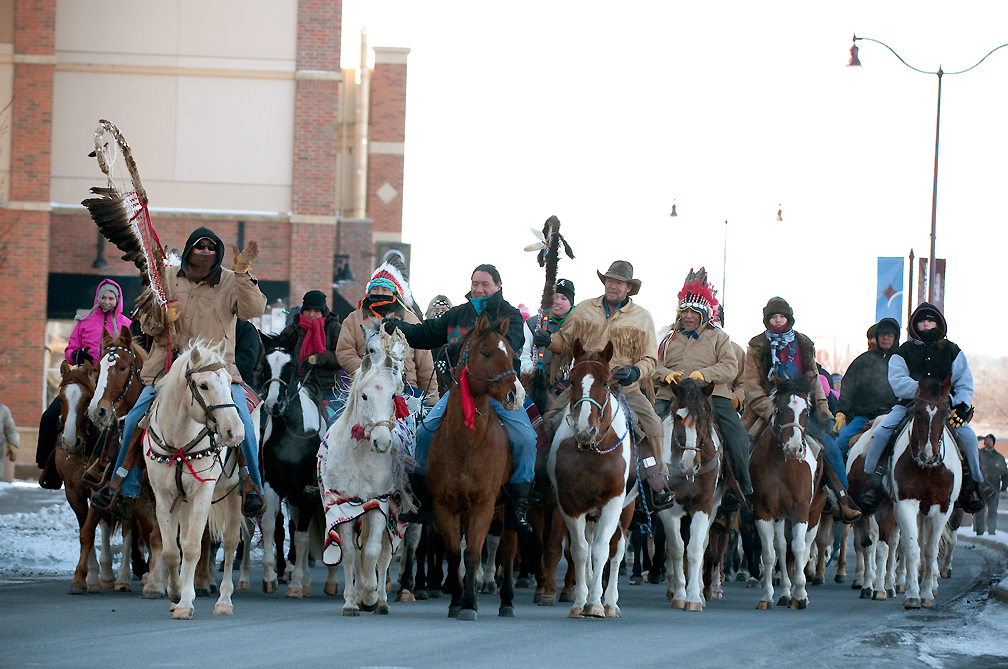 Riders from the Dakota 38 Plus 2 Reconciliation Ride arrive in downtown Mankato on December 26, 2012, for a ceremony to commemorate the execution of thirty-eight Dakota warriors on the day after Christmas in 1862. The ride left Lower Brule, South Dakota on December 10, and made fourteen stops along the 340 mile ride to Mankato (Photography for The UpTake by Caroline Yang)

There were frozen riders on horseback, completing a two-week journey from the Missouri River in South Dakota. There were runners from Fort Snelling who had run, in relays, since midnight on Christmas night and finally arrived, almost 11 hours later, in downtown Mankato. And there was a throng of somber people shivering between the city library and a rail yard, waiting to observe the 150th anniversary of one of the most troubling events in U.S. history:

The simultaneous hanging, on a giant, four-sided scaffold that stood near this spot, of 38 Dakota (Sioux) Indian men on the day after Christmas in 1862 — condemned by military courts with none of the legal rights afforded to citizens, but put to death in the largest mass execution in the country’s history because they had:

A) waged cruel war against white settlers B) bravely defended their families and homes after being swindled by the state’s leaders C) needed to die in order to slake a white thirst for vengeance and retribution or D) all of the above.

A century and a half later, the questions are still being discussed, but only gingerly. Maybe it’s too soon to talk honestly about a race war that was a reaction to brutal government racism, resulted in racial repression and revenge, and in the triumph of white “civilization” over the original people of Minnesota. One thing is clear, officialdom is not very eager to confront this history.

Gov. Mark Dayton issued a proclamation in August marking the start of the 1862 war, and ordering state flags lowered in honor of the victims of the war. But he issued no statement or order on the occasion of the 150th anniversary of the hanging of 38 Dakota Indian warriors in front of a cheering crowd of thousands of white citizens.

There was talk, a few weeks ago, that the governor might lower the flags in honor of a mournful anniversary that many Dakota still see as an extra-legal lynching fueled by hate and fear. But there was also hand-wringing over how the descendants of white victims of the war might be offended. So, in the end, nothing was done. Although there were leaders present from Dakota Indian communities in Nebraska, South Dakota, Minnesota and Canada, the descendants of the victorious side in a conflict with national consequences were represented almost exclusively by local officials of the city of Mankato and Blue Earth County.

It was as if the state of Minnesota, 150 years after the devastating war that marked its infancy, still has trouble coming to terms with the causes, and the effects of the war. Four to five hundred whites died during attacks on settlements and isolated farmsteads and in a handful of pitched battles. But even more Dakota died during the retribution that came after the war, in hangings, in prison camps, in exile to barren reservations where starvation and disease took heavy tolls. The silence of the state hung in the single-digit temperature and frosty air of Mankato yesterday, where several hundred people gathered for a two-hour ceremony remembering the hanged. Even there, a deep ambivalence emerged: Some speakers talked of the innocent victims, white and Indian, while other speakers saluted the 38 who were hanged as soldiers who had fought to protect their people.

“One hundred and fifty years ago, Minnesota’s greatest tragedy played out here in the Minnesota River Valley,” said Dean Urdahl, a historian of the war who is a Republican legislator from Grove City, Minnesota and also serves as co-chair of the Minnesota Civil War Commemorative Task Force. The only state official on hand yesterday, Urdahl said the war, which occurred during the middle of the Civil War, has never received the attention it should, and that it is important that people remember “the atrocities and horrors of that war (because) through education comes understanding, and through understanding comes a healing, and that healing is still needed today.”

Mankato Mayor Eric Anderson read a city proclamation designating 2012 as a “Year of Understanding and Forgiveness” between Dakota Indians and white Minnesotans. Several speakers noted that Indians used to avoid traveling to, or through Mankato — an avoidance of a site associated deeply with the destruction of Dakota tribal culture and the official government effort to exterminate or banish the Dakota from their homeland. But things began to change in 1972, when a small group of Indians and residents of Mankato started an annual Dakota pow-wow in the hopes of promoting reconciliation. Forty years later, most of the original healers are gone, but their effort lives on. The anniversary of the execution, once a day of shame and silence, has been observed publicly since 1978. “This is a great day not only for the Dakota, but for Mankato, too,” said 81-year-old Bud Lawrence, a former restaurant owner who was one of the founders of the pow-wow and commemorations. “Every year, we get a little more reconciliation coming out.”

A “Year of Reconciliation” was proclaimed on the 125th anniversary of the Dakota War by Gov. Rudy Perpich in 1987. While real reconciliation may remain in doubt, Dakota voices have grown more insistent on making sure their story is told.

The names of the 38 executed warriors — displayed on a new memorial unveiled yesterday — were read aloud by Rev. Sidney Byrd, a Dakota spiritual leader and Presbyterian minister from Nebraska whose great-grandfather was one of the Dakota warriors imprisoned after the fighting. “They made the supreme sacrifice for our freedom,” Byrd told the crowd, asking them to bow their heads while a drum group sang an honor song for the 38. “We must never forget those who paid for our freedom.”

At the end of the ceremony, Pete Lengkeek, a Dakota from Fort Thompson, South Dakota, passed the “38-plus-2″ eagle-feather staff he has been carrying for four years to another man, Perry Little, a Yanton Dakota who will carry it on horseback for the next four years of commemorations. The staff has 38 eagle feathers tied to the staff for those who died in Mankato, plus two more at the top for another two warriors who were hanged at Fort Snelling in 1863. Lengkeek didn’t know who should be the next to carry the staff until he saw Little in a dream he had yesterday morning. The two men embraced, and wept, as the eagle-feather staff changed hands. Each of the many Dakota tribes will eventually get to carry the staff for four years, Lengkeek said, until it has gone around the circle of Dakota nations. Maybe then, he said, reconciliation will come.