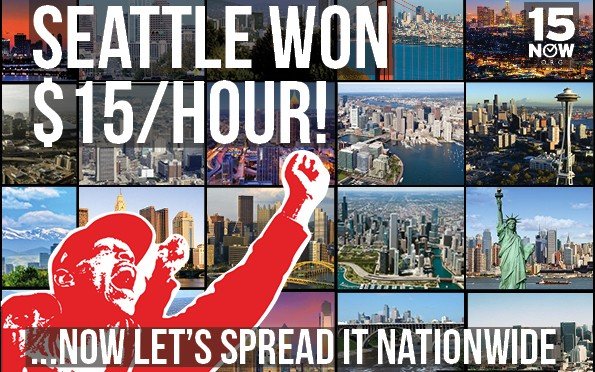 Seattle Washington’s City Council passed a $15 minimum wage ordinance earlier this month making it the first major city in the country to do so.   This event has sparked conversation and debate across the country and across all political lines.  The criticisms have come not just from the right, but also from those on the left.

The ordinance is a truly imperfect piece of work from the standpoint of the working class.  It is full of exceptions,  training wages, tip credits and an array of phase-in categories sufficient to confuse almost any attempt to decipher it.  I could go on with the criticisms, but the deficiencies have been adequately discussed by many left commentators and organizations.  I trust that the reader will have no problem finding these articles if they desire a more lengthy description of the problems with this law.

Having said that, I am going to take the position that this was indeed an incredible win for the working people. A quick glance at the evolution of the $15 minimum wage movement would be helpful at this point.

This was an incredibly short time for an idea to go from what almost everyone considered absurd to an enacted piece of legislation.  Pretty hard to characterize this as anything but a win.  But let’s take some of the more popular, and legitimate questions and think about them briefly.

Why would the Socialist Alternative councilor Kshama Sawant vote for legislation that had so many flaws? Why not vote against it and fight for what so many of us know is the right thing?

To me, the better question is why in the world would a representative of working class people ever vote against anything that improves the situation of workers?  Sure, the ordinance is well short of the ultimate needs of workers, but it is also undeniably a better situation than they had six short months ago.  Even if the $15 law proposed by 15Now was passed in it’s entirety, it would still not solve all the issues of inequity, etc. faced by the working people.  So one could argue, and some do, that none of this was the right thing to fight for anyway.  Well, tell that to the estimated 100.000 Seattle workers that are going to see a series of significant raises over the next several years and I am willing to bet most would disagree with you.

Now mind you by the time May rolled around, this was going to pass, no question.  So should the only council member that  unfailingly represented only the working people, the one that ran on and fought to raise the minimum wage, be the only one to vote against a raise in the wage?  I submit that would be a bit misguided to say the least.

I think it is fair to say that the it certainly could have worked out differently in Seattle.  But we must bear in mind that Socialist Alternative and 15Now were not the only players on the field there.  While there was a very significant number of workers, along with backing from a number of courageous labor organizations, there were also “those other folks”.

Now you might think I am referring to big business lobbyists, etc. and yes, they were certainly in play.   But more importantly from a movement building perspective there were some pretty heavy hitters from labor that were not exactly “all-in”.  Such influential figures as David Rolf of SEIU 775NW and David Feiboth of the Dr. Martin Luther King County Labor Council were all too willing to take the safe and comfortable position of working with the mayor and his committee.  Not only were they at the podium with the mayor when his plan was announced, they publicly denounced the ballot initiative!

Let’s face facts, labor organizers such as Rolf and Freiboth have considerable influence over the members of their organizations.   If they had worked to mobilize their members to rally and organize for a stronger ballot initiative, instead of taking the familiar route of backing the Democrat mayor things might well have been different.  I must point out that I don’t believe any of these folks are against the workers.  They were simply reacting in a way that was familiar to them as labor has been fighting a defensive battle for the past couple decades at least.

Be that as it may, the fact of the matter is that a significant percentage of the people in Seattle thought of this as a done deal.  Certainly that was the message that Rolf, Freiboth and others were telling anyone who would listen in national & local media.  This confused messaging by labor leaders negatively affected the organizing and signature collection efforts of 15Now and the labor organizations that wanted to fight for a better ordinance/ballot initiative.

The lesson that is perhaps the most difficult for activists to learn is that we cannot replace the understanding of the workers with our desires.  The much mentioned, oft ignored, “meeting consciousness where it’s at”. In Seattle the majority of the public was seeing this as a done deal.

So what good would Sawant have done by voting against this?  I can’t see anything, but I can see downsides.  Her, and the movement, would have been seen as voting against the very thing they fought for.  It would have made it incredibly easy for the Democrats to spin this as something they did out of largess, and to marginalize Sawant (and by implication the movement).  Instead, the movement fought and made their case right up until the final vote tally.  This makes it more likely that the people would see that they, the workers, won this, and who and what worked against them.  That’s much better for the future than the alternative scenario.

Since then, look at San Francisco – isn’t the bill going to the voters in November so much better than what passed in Seattle?

Yes, yes it is.  One could write an entire article on the differences between these two campaigns.  But at the end of the day, I think it is fair to say that the first attempt at anything rarely produces the optimal outcome.  Seattle was the first; from now on each subsequent city or state can learn lessons from that campaign.  Labor leaders will note that their Democratic Party ‘allies’ were more than willing to pass amendments that weakened the position of workers, and pander to the business interests that financed their campaigns.  This seems likely to affect the positions that labor leaders take with Democratic Party politicians in future campaigns.

Did Socialist Alternative and Kshama sell out, like so many other politicians have done?

In my opinion, decidedly no.  15Now, Socialist Alternative their councilmember Sawant, and hundreds of activists fought for every inch of gain, and against every millimeter of loss right to the last seconds before the vote.  They won what they could at the moment and demonstrated what was possible if the working class people exercise their power in an organized manner.  They also showed the pitfalls, pointing them out every step of the way, that future campaigns can learn from and avoid.

To answer the question I posed in the title, yes this is a win.

Against the backdrop of decades where a labor win has most often been defined as holding the line against loss of pay, benefits, job security, etc., it is hard for me to see it any other way.

The campaign in Seattle is a win defined by gains for working people, imperfect, yes, but very real gains.

Waging this campaign has totally changed the conversation across the county, and indeed across the world.  In several cities, the call for $15 is being heard, and it is no longer possible to dismiss it as crazy.

Working people everywhere have seen a glimpse of what is possible. That is perhaps the most substantial win. After a long period of falling standards of living, and despondency, once again working people have demonstrated that they can win struggles to improve their lives through their own organized efforts and are not doomed to making the best of  scraps doled out by corporate sponsored political parties.