Custer was defeated in less than an hour on June 25, 1876, while parts of his command under Major Marcus Reno and Capt. Frederick Benteen several miles away held of attacks from a hilltop for two days until reinforcements arrived. News of the battle did not reach the nation until July 4 during the national Centennial celebration.

Alexander and the 7th Cavalry rode across the river for the opening and closing ceremonies of annual reenactments of Custer’s last fight that killed 263 of the solders trying to reach the camp. 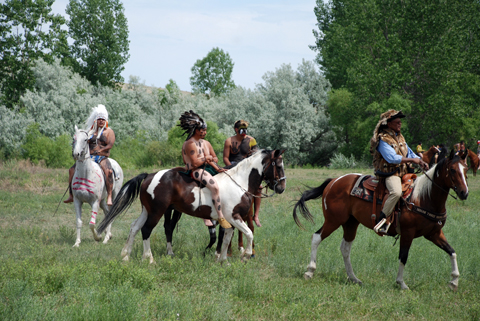 “The land, Mother Earth, is really the star,” said rancher and poet Henry Real Bird, director of the Crow Indian reenactment and owner of the land. “People are drawn to the site, and I grew tired of answering the same questions 200 times a day about what happened here, so we decided to do this program to show them.”

On a hillside 25 miles north and west of Medicine Tail Coulee, the Hardin Chamber of Commerce and Agriculture hosts a competing reenactment which also boasts a Crow author, Joe Medicine Crow, a descendant of Custer’s scout White Man Runs Him.

The chamber traced the roots of its reenactment to a cooperative project begun by Hardin and the Crow tribe from 1964 to 1973, when it was suspended because of protests by the American Indian Movement. In 1990, the show returned as an annual event. Real Bird, though, said the chamber moved their reenactment to the hillside along the railroad tracks and revised the story.

“It’s their story told in their version,” he said.

“We’re walking the very ground—living the history where it happened,” Real Bird said. As a child, he said, he walked the grounds picking up shells and bullets that demonstrated that the cavalry had fired into the village.

The Miniconjou band was camped where the reenactment takes place across the river from Medicine Tail Coulee.

A young woman who said she’d been in about 10 reenactments since childhood said the Crow have always performed the reenactments, even though their nation had been among Custer’s allies.

“What they say around here is that the Cheyenne fought the battle, the Sioux took the victory and the Crow got the land,” she said.

In an interview, Real Bird was not amused by the characterization. “You can be sarcastic if you want to be. We’re not about sarcasm; we’re past all of that. We’re about unity now. We don’t let hate get in the way of enjoying the sense of history and mystery.”

“It’s the spirit of the land and the people. The people here are Indians,” Real Bird said. “This land was part of the Indian camp. For many years, the Indians were afraid to tell the story for fear of retribution.”

The land can be used for healing, he said. Groups ranging from activist and actor Russell Means to the U.S. military have used the site for their own purposes.

In his script, Real Bird has created an Indian side of the story that includes the Crow by recalling how the Crow as well as the government’s original adversaries—the Sioux, Cheyenne and Arapaho—have been wronged.

In his script and an interview, Real Bird—a former poet laureate of Montana—recalled his grandmother’s bitter recalling of the time the Bureau of Indian Affairs, under pressure from neighboring white ranchers, killed all the Crow’s horses in the 1920s or 30s.

Both the Hardin and Real Bird reenactments cover many of the same events, beginning with the arrival of Lewis and Clark—the first white explorers into this Indian country.

“Me, I just want to put on a good show, as long as people keep coming,” Real Bird said. The Real Bird family, including Henry Real Bird’s three brothers and a sister, are involved in the event as are his children and grandchildren. “My boys will keep doing this because our people enjoy doing it,” he said. 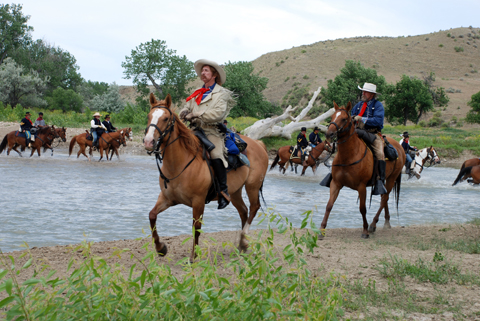 “I used to provide all the horses, but I don’t do that any more. Some of the boys bring their own horses,” Real Bird said.

The cavalry and the Indians prepare for the reenactments separately. Soldiers say they continue to do the reenactments because the Indians use it as a social occasion like a family reunion; Real Bird’s three brothers and a sister as well as his children and grandchildren have been involved.

For his part, Real Bird said one of the reasons he continues is for the sake of the soldiers. “They enjoy it,” he said.

Indeed they do. Some of the soldiers have paid as much as $2,400 for the experience of getting killed three times at the end of more than a week of horseback riding and camping out in the fashion of Custer’s 7th Cavalry in the 19th century. Some financial aid and scholarships are available. Participants get a discount by bringing their own horse.

“Think of it as a week on a dude ranch,” said John Doran, a cowboy poet and outfitter in the mountains near Twisp, Wash. He has trained U.S. Special Forces headed for Afghanistan in horseback riding and mule packing.

In 1997, Doran, along with Don Super and Ken Nash, wrangled horses for Kevin Costner in the film The Postman. (Doran was a man with a bagpipe appearing occasionally in the film.) When the film was completed, the three men joined the reenactments to continue working with horses and people.

Within a year, they created the cavalry school to train people for reenactments.

Super, a wrangler who also plays chief of scouts, has been in every reenactment since then, except 2003, when he watched from the grandstand after a cantankerous horse reared all the way over on his back, breaking Super’s pelvis. He spent eight days in a Hardin hospital and hotel room. Super is a wrangler who also plays the chief of scouts and runner coordinating some of the action.

Some troopers also treat the reenactment as a family affair. Husband and wife Jim and Diona Davis from Denver joined the cavalry for the second time this year. She was the only woman to ride with the cavalry. Super’s wife and two grown sons have ridden as troopers in previous years. Doran’s two adult sons have participated, and one broke his leg jumping into the river for a swim this year.

About 30 solders rode with the cavalry, about half of whom were students in the school. Some of the soldiers are experienced riders but at least two this year had never ridden a horse before joining the school. They learned to ford the river on one of their first days of riding.

Ron Glasgow, a school custodian of Kalispell, Mont., said he has invested $40,000 in his two horses, tack, saddles, uniforms and accessories for Civil War and Little Big Horn reenactments.

Alexander began his Custer role in the Hardin reenactment, where he performed for 10 years before leaving to participate in an “Unsolved Mysteries” film. He returned to the Real Bird reenactment where he has been annually for 14 years.

Both Alexander and Rick Williams, who has played Custer in the Hardin reenactment since 2007, make special appearances as the “boy general” around the nation. They have their own websites: Williams at general-custer.com and Alexander at georgecuster.com.

Alexander, who lives with his wife in the home once shared by George and Libbie Custer in Monroe, Michigan, defends making a hero out of Custer. He said he has wanted to play Custer since he was three years old.

“We’re such a glitter-hungry society with celebrities like the Kardashians and Paris Hilton,” Alexander said. While admitting that Custer was also a media celebrity, he said he believes Custer and Generals Sherman and Sheridan earned their reputations.

Alexander pulled his research into a picture book called G.A. Custer to the Little Bighorn (2010), but he sees value in the mysteries of the Little Big Horn, comparing the area to the Bermuda Triangle. 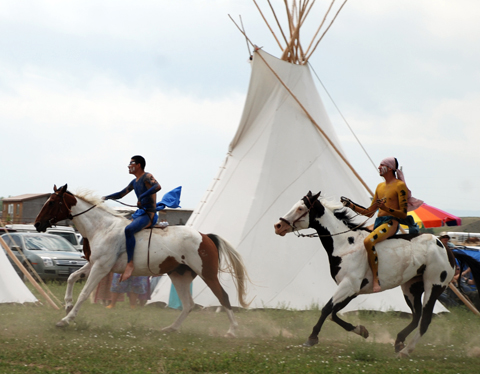 At least four major books appeared on Custer and the battle in 2010: the best-selling The Last Stand: Custer, Sitting Bull, and the Battle of the Little Bighorn by Nathaniel Philbrick, The Killing of Crazy Horse by Thomas Powers, Bloodshed at Little Bighorn by Tim Lehman, and Custer: Lessons in Leadership by Duane Schultz. Authors of four books that have appeared since then were at the battlefield museum signing books on June 24.

Historians tend to see fewer mysteries in recent years as they’ve reconstructed the events, incorporated archeological evidence, and native oral histories into the traditional historical record. None seems to diminish the interest in the cultural conflict. The national monument was crowded June 24 on the anniversary weekend, even while the two reenactments were taking place.

Both narratives take the viewers through a history of broken treaties, settlers’ invasions, promises made and broken and tragedies. The Hardin reenactment on a dusty hillside contains more covered wagons, a constructed fort wall, and cannon fire along the lines of a grand local history pageant.

The Real Bird event on the river uses the setting to its advantage, though it has its drawbacks. During the high water of 2011, the river was 12 feet above flood stage, so participants had to load their horses into trailers to continue the show on the far side, rather than fording the river, said Keith Herrin of Helena, who is in charge of the cavalry in the field.

Reenactments of the Fetterman and Reno fights take place in front of the grandstand but Custer makes his last stand across the river near the original site.

Several of the actors are veterans of wars in Vietnam, Iraq and Afghanistan. One of them, Glenn Davis, earned a Purple Heart in Fallujah, Iraq.

“We’ve tried many different ideas about the story,” Real Bird said. He said he once used a story he learned from former CIA agent that Jesse James had been hired by a bankers association to assassinate Custer because of his significant contribution to a Union victory in the Civil War. The current script says that Custer was staked to the ground, his heart cut out, and his body thrown into the river.

An interpreter with the National Park Service at the Little Bighorn National Monument called that story “the wackiest thing I’ve ever heard.” He said another implausible theory not in the reenactments was that Custer died in a coulee and solders dragged his body to the hill where it was found and where the monument now stands. Men fighting for their lives under heavy fire would not be moving bodies around for appearances, he said.

The Real Bird script refers to Custer as “the one who killed babies and old people at the Washita” throughout the script, suggesting that Custer had it coming. To many, Custer’s attack of Black Kettle’s village in 1868 was a blot on his record for both humane and strategic reasons.

“This was a small battle that spread over a very large ground,” Real Bird said, covering at least 17 miles from where Custer split his command to the coulee where he met his end. It’s ground that continues to be trod, as the Battles of Little Big Horn rage on.