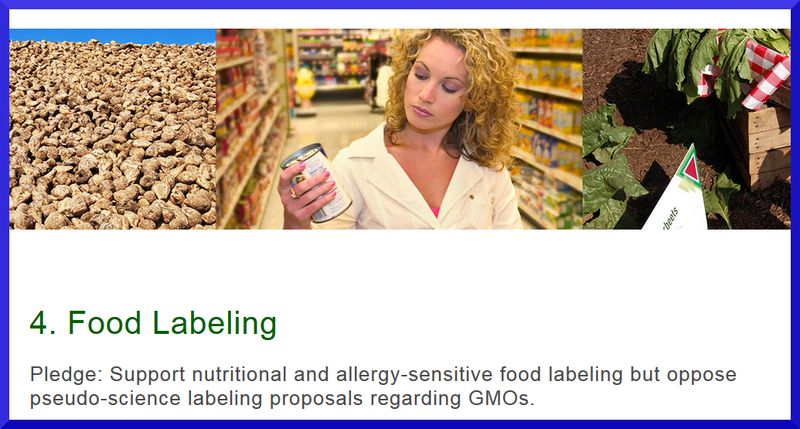 The Right to Know campaign, a coalition of small farms, consumer co-ops, consumer groups and nonprofits, has asked lawmakers and candidates to support a state GMO labeling law.

It’s an ongoing debate, and as this document reveals, a number of people running for the Minnesota House this year have said “Yes” to both issue campaigns.

We suspect that some of the candidates above will want to clarify where they stand so that voters don’t get confused.

For instance, the Owatonna People’s Press reported in Most regional House candidates say ‘no’ to GMO labeling:

Petersburg didn’t respond to A Greater Minnesota’s pledge request, but said that it’s easy for him to miss a few during campaign season. He said that he was “on the fence” on the GMO labeling issue and related the mixed public consensus to that of climate change.

Among DFL or GOP candidates running for state House districts that include part of Steele County, two of them didn’t respond at all to the pledge. That was Petersburg and Peggy Bennett, the GOP challenger in District 27A, a district that includes Blooming Prairie.

The Republican Daniels, as well as DFLers Shannon Savick and Bev Cashman, supported the pledge in full. Savick is running against Bennett. Cashman is up against Petersburg.

Fritz responded and supported all of the pledge points except for the one against GMO labeling. She said that there isn’t enough information to take a stance but didn’t pledge to oppose labeling in the meantime.

“I haven’t reached a decision,” she said. “I know the feds are working on it, and I think they’ve come further on some of the labeling.”

Cashman said she signed on in opposition of GMO labeling after researching the topic and coming up short of a solid argument for the other side. But she said that there’s reasonable concern on both ends of the debate.

Daniels is among those who have said yes to both (see pdf below), so he might want to straighten that out. And while Republican Bennett–in a red hot race with DFLer Savick–didn’t sign A Greater Minnesota’s pledge, as the Owatonna People’s Press reported, she did say yes in the Right to Know campaign’s candidate survey.

Here’s the side-by-side comparison created from a spreadsheet that the Right to know campaign sent out today and the information posted on A Greater Minnesota’s page as of October 27, 2014.

The Greater Minnesota pledge point is:

Good Minnesota farmers and good Minnesota food companies support food product labeling that helps consumers make informed choices regarding nutritional information and food-allergies. We do not support labeling requirements, however, that are based on pseudo-science or activist agendas such as calling out GMOs (genetically modified organisms). The reality is most foods, even many organics, involve genetic enhancements to improve food quality and reduce the incidence of pests and disease during food production. . . .

Read the rest on the site.

The Right to Know campaign sent out a GMO Labeling Candidate Survey. From the page about the questionnaire:

In November 2014 we will elect our MN State Representatives. Do you want to know which candidates support your Right To Know? So do we. We sent out a letter to all candidates, asking their position on GMO Labeling and providing them with information on the key issues. Check out the Candidate GMO Labeling Questionnaire/Education, or keep reading to see what we asked.

3) If no, what concerns do you have about the bill?

4) Do you need additional information you would like about the issue or the bill, H.F.3140?

Read more at the Right to Know site. According to the Minnesota House of Representatives website, H.F.3140 was authored by Karen Clark (DFL-Minneapolis), with nine co-authors, one of whom retired after the past session.

While the authors are only DFLers, candidates from all three major parties have indicated support for labeling to the campaign. Those opposing GMO labeling have also gained tri-partisan support, although two of the IP candidates have said yes to both positions.

Photo: Clip art used by A Greater Minnesota on its page about it’s fourth pledge point. We’d have a little more confidence if the site designers had pick stock art where the model’s hand isn’t covering the Nutrition Label on the can she holds. Here’s that lady shopping in 2011 in a Fox News post where the image of the hand over the label is a better match for content of the copy it’s supposed to illustrate: Shoppers Pay Less Attention to Nutrition Labels Than They Think. (Perhaps that was the problem for the twelve candidates who said “yes” to both groups). A screengrab: 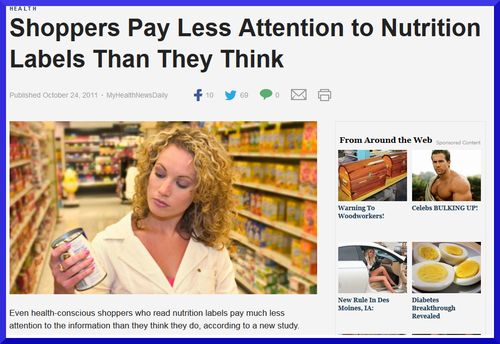 Correction: A previous version of this story incorrectly stated that 57B Anna Wills (Republican) signed yes to the “Right to Know” campaign.