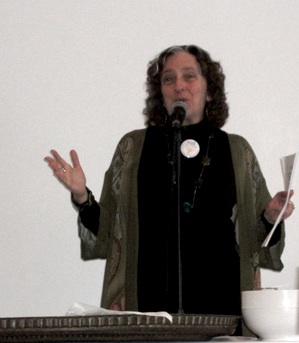 “Across all communities and all traditions people have been enslaved and freed,” said Rabbi Amy Eilberg at the Freedom Seder at Mount Zion Temple.  Every year at Passover Jews gather to retell the story of the Exodus from Egypt and journey to freedom. The Freedom Seder, sponsored by Jewish Community Action each year, highlights modern significance of the ancient celebration.

Jewish Community Action, an organization that advocates for social change, hosted their tenth annual Freedom Seder at Mount Zion Temple in St. Paul on Sunday, March 11.  An audience of 220 supporters from over 20 diverse communities came to the Freedom Seder.  A few of the organization that attended were Immigrant Law Center of Minnesota, Congregation of Sisters of St. Joseph, Advocates for Human Rights, Mujeres en Liderazgo, UNITE HERE Local 17, African and American Friendship Association for Cooperation and Development Inc. and Council on American-Islamic Relations Minnesota.

In the past the Freedom Seders focused on immigrants and worker rights. This year personal stories were told by people who could be adversely impacted by the passage of Minnesota’s proposed constitutional amendments banning same sex marriage, right to work, and voter ID.  Others talked about housing foreclosures and immigrants being jailed.

Four stories were told in all: a Latino man who is now a community organizer spoke about being jailed; an older black women shared how difficult it can be to be black and wanting to vote; a lesbian women said she always carries a document to prove she is a parent in case her child has to be hospitalized; and a single mother from Mendota Heights shared the story of losing her home to foreclosure due to the absence of one needed signature.

For more information on Jewish Community Action and its programs, e-mail Adele Brown adele@jewishcommunityaction.org or call 651-632-2184