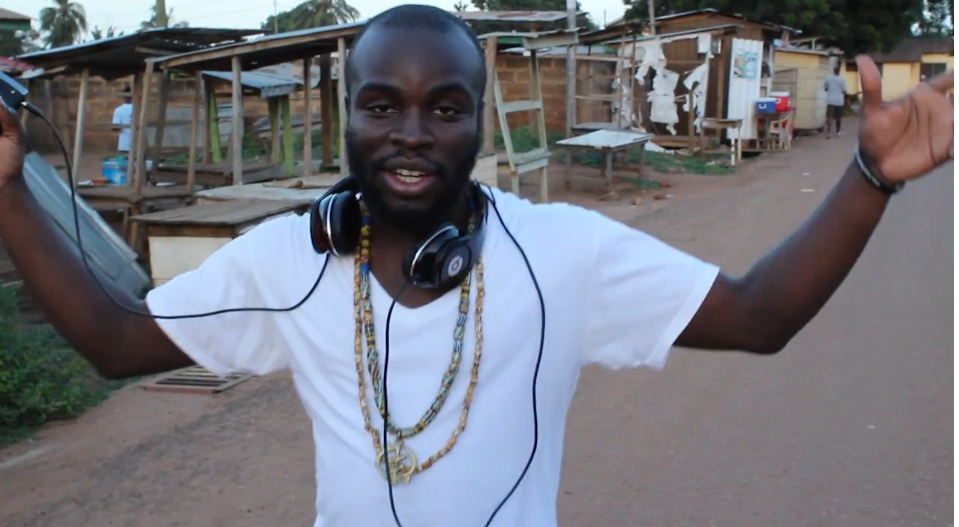 M.anifest in Ghana during the filming of We Rock Long Distance, a film by Justin Schell

Filmmaker Justin Schell traveled halfway around the world and back.  He’s followed  Maria Isa through the streets of Puerto Rico. Trekked to Thailand with Tou SaiKo Lee. And finally, heard the poetry from M.anifest’s grandfather in Ghana. It’s all for his feature length film We Rock Long Distance, premiering at Intermedia Arts this weekend as part of their Catalyst Series. The film weaves together history, ethnicity, music and the meaning of home and place through Twin Cities hip hop artists Maria Isa, Tou SaiKo Lee and M.anifest

The film, hot off the editing bench, explores the lives and connections of these three musicians here in the Twin Cities and in their home countries. For Schell, it was that connection and the types of subjects they chose to explore that lured him to spend seven years creating this film.

I managed to get a few minutes of Schell’s time to ask about this incredible process.

AH: Tell me about why you decided to make this film, which is a massive undertaking…

Schell:  I didn’t come into this thinking, ‘I’m going to tell these stories with these three people.’ It unfolded. It even unfolded while we were making the film. At first, it was part of a larger project creating an encyclopedia about Twin Cities hip hop. As I was doing this, I realized there are a lot of people making hip hop that aren’t originally from here.  So I wanted to explore that more. The kinds of stories they were telling with hip hop. The connections they were making. The controversies it was causing…because older generations in these communities thought that some of these artists were Americanizing the youth, getting them into trouble.  And so, it became, ‘I’m going to make a documentary film about this. I’m going to write my dissertation about this.’

AH: You said they were telling different kinds of stories than other hip hop artists here. What were those stories and what makes them different?

AH: You went to three different countries. How long did you spend at each country and what surprised you the most?

Schell: I went to Ghana with M.anifest. Twice. I went to Thailand with Tou SaiKo Lee for a month. With Maria, it was two weeks in Puerto Rico.

For M.anifest, it was learning how his grandfather, a renowned scholar, writes music and the two comparing how it’s done. With Tou, it was going to Thailand and having him try to learn this centuries old poetic chanting from his aunt. Both were trying to talk across these geographical and generational differences. For Maria, it was seeing where her grandmother was born and where her roots trace back to. Part of it was just seeing something that had only been an image in Minnesota. Then sharing these experiences with other people through this film and giving back.

AH: Maria Isa Talks about being Sota-Rican, both Minnesotan and Puerto Rican. I think that speaks to the diaspora these artists live in. What was it like putting that on film?

Each of these artists represents a distinct trajectory of coming to America.

One of my favorite scenes in the film was M.anifest talking about how he wants to go back home, how he left home, or people from home. It’s very clear where his home is…Ghana. For Tou, it’s the exact opposite.  Hmong people don’t have a home. Most of his family aren’t at the refugee camp he grew up in. It’s sort of making a home wherever you are. My interpretation of it is that his place is more in the diaspora. The song we recorded over there in his aunt’s bamboo hut is going to involve Hmong artists from all over the world. It’s called Unified Worldwide.

AH: Audiences really connect with these kinds of stories. Why do you think that is?

I remember when I was first conceiving this film and someone said, ‘people are going to be fascinated with this film because there’s going to be travel involved’. It’s also featuring people we don’t normally see. And that’s what attracted me to these hip hop artists. These are different types of stories. It was also a struggle for me, and anyone who is making a film like this, not to tokenize people. I’m trying to show intertwined histories of struggle through hip hop. I don’t want to make these stories emblematic. There are thousands of global stories in Minnesota, and these are just three of them.

Here’s a sneek peak of the film:

We Rock Long Distance screens at Intermedia Arts Friday, February 6that 7:30pm with a post-show performance by Maria Isa and Tou SaiKo Lee to follow.

It also plays Saturday at 4:30pm and 7:30pm with a post show discussion with the filmmaker.