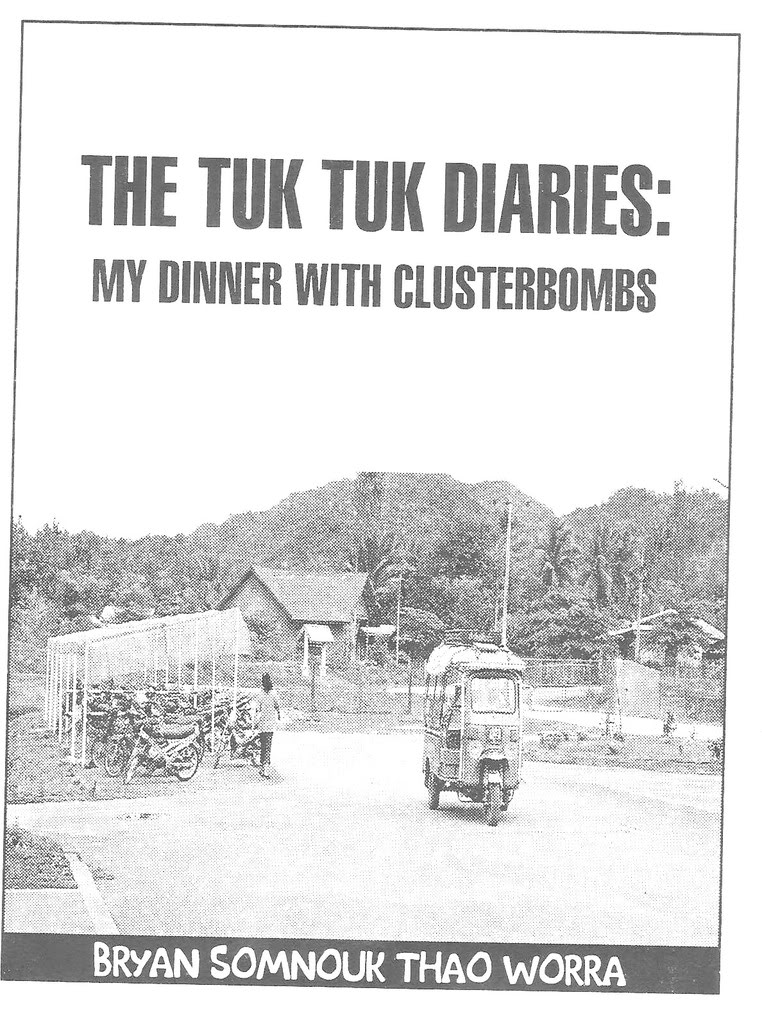 I’d come to the US as the adopted son of an American pilot and his family who’d been living abroad, flying for Royal Air Lao. 1973 was a significant year because it was the year the secret bombing of  Laos ended. It was the end of a campaign that left over 30% of Laos contaminated with cluster bombs. Many continue to remain a danger to this day.

I discovered this firsthand passing through Xieng Khouang province on my way to the capitol city of Vientiane. There, I shared a plane with a young man in agony who had been struck by a cluster bomb buried beneath the ground while trying to dig a firepit for his family in the rural countryside. For most of the others on the plane, this had become shockingly routine.

I had known the figures and a little about the situation already thanks to the documentary Bombies and a few articles I’d come across over the years. But being on board that plane with him made it concrete. The smell of blood, the sounds of pain, the emotions of his family who came with him, uncertain of his future, if any. You don’t forget that easily.

As a writer, you take on a lot of topics in your lifetime.

Some things you return to over and over again. Ten years later, that incident still lingers with me. I’ve wrestled with how one confronts such a thing through art.

It is an issue of particular concern to me because the media, the history books would otherwise let most stories about Laos pass and fade into a footnote, if it’s mentioned at all. But I also know that to remain silent and to say nothing would be a betrayal of one’s artistic freedom, and one’s experiences.

I wrote about the experience in my poem “Khop Jai For Nothing, Farangs,” which has since been permanently included on the National Endowment for the Arts website when I received an NEA Fellowship in Literature in 2009. That poem first appeared in a chapbook I wrote immediately after my trip, entited The Tuk-Tuk Diaries: My Dinner With Cluster Bombs.

The collection was graciously put out in 2003 by an underground Minneapolis literary collective, Unarmed, who used a guerrilla distribution method of leaving them around the city for free in various coffeehouses, record stores, bookstores and libraries. I think we made about 100 copies. Not much, but with this sort of thing, a poet learns to trust the universe to lead the right readers to one’s work.

I look at it now, and would admit it was a very rough, unfiltered collection, but it was a heartfelt distillation of my emotions and feelings of returning back to Laos after 3 decades. I think there are many poems in it that still capture the struggle of confronting unexploded ordnance, or UXO.

Ultimately, I think finishing The Tuk-Tuk Diaries: My Dinner With Cluster Bombs helped me sort out many of the directions I would take future efforts in my community. One of my favorite projects was working with the Lao Assistance Center, Legacies of War and the artists of Refugee Nation in 2010. Then, we brought the Legacies of War: Refugee Nation Twin Cities interdisciplinary exhibit to Intermedia Arts to address UXO and the Laotian Diaspora.

I’m happy to see many of our artists and community builders continuing to take on the issue from so many different angles. This week, Channapha Khamvongsa, the executive director of Legacies of War spoke at the United Nations in New York on UXO. It was the beginning of the Voices From Laos tour, which will bring some amazing speakers who work firsthand with UXO in Laos.

Among those who will be speaking are Manixia Thor, who is the leader of an all-woman demining team in Laos. Also speaking with her will be Thoummy Silamphan, who lost his left hand when he was 7 years old to a bomb explosion. He now serves as a Victim Assistance Advocate in Laos. They’ll be in Minnesota on April 21st and 22nd.

But I bring all of this up because as we approach the Lao New Year on April 13th, I hope we will take into consideration that a New Year is not the time to forget the past, but to embrace it and remember how it has lead to the present, and where we might go in the future. We must always ask ourselves: How do we leave a peaceful legacy, the kind our children and grandchildren deserve?

I believe that begins with using your voice to help others find theirs.