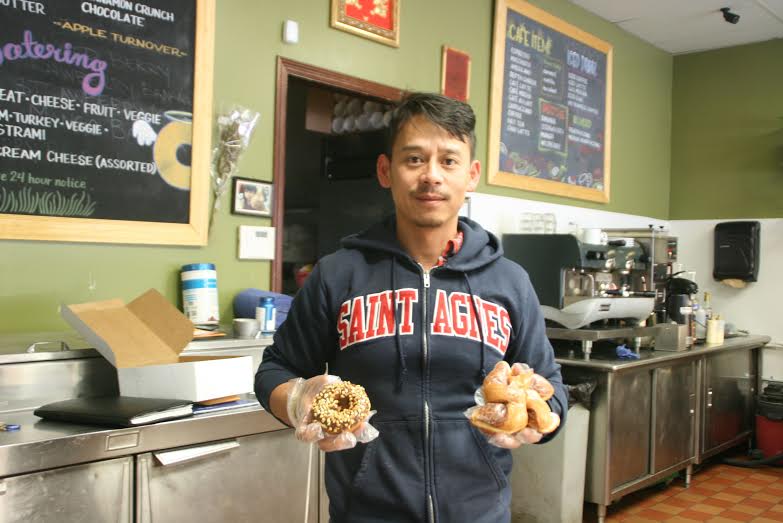 [Editor’s note: This is part of a series on businesses along the Green Line, one year after opening. We interviewed SugaRush Donuts and other University Avenue businesses in 2014 as part of a Minnesota Historical and Cultural Heritage Fund grant. We’re returning after the opening of the light rail to see what’s changed.]

SugaRush Donuts, the small family doughnut shop on St. Paul’s Green Line, has a lot of fans from the neighborhood. People have been coming in early for a sweet breakfast or an afternoon snack since 2008 when Keoni Nguyen and his wife Susie Path took Rainbow Donuts over from Nguyen’s brother and renamed it SugaRush. His best seller is the apple fritter, but his hand-rolled cake doughnuts and the raised versions – choose sugar, glaze or chocolate icing – are popular. So are the bear claws, doughnut holes and the cinnamon wheel.

“It took seven years for people to know we were even here. Once the Green Line was up and running, people started to avoid driving University Ave. completely,” he said. “And the train doesn’t help business. I don’t see people on their way to work, jumping off the light rail to come in to grab breakfast here.”

“The few (rare) parking spots in front of the shop is not that big an issue,” he says. “We’re open early, when no one else is open. That’s when the customers come.”

Once, Nguyen had grand plans for the shop, hoping to add a patio to attract local college students and state workers, but the patio was never built – too many regulations from the city, he said.

Now, much of Nguyen’s income now comes from his wholesale business. He delivers to coffee shops, quick stops and even churches, including St. Agnes School, where he once attended. If he has any doughnuts left over, they go to homeless shelters and other charities. 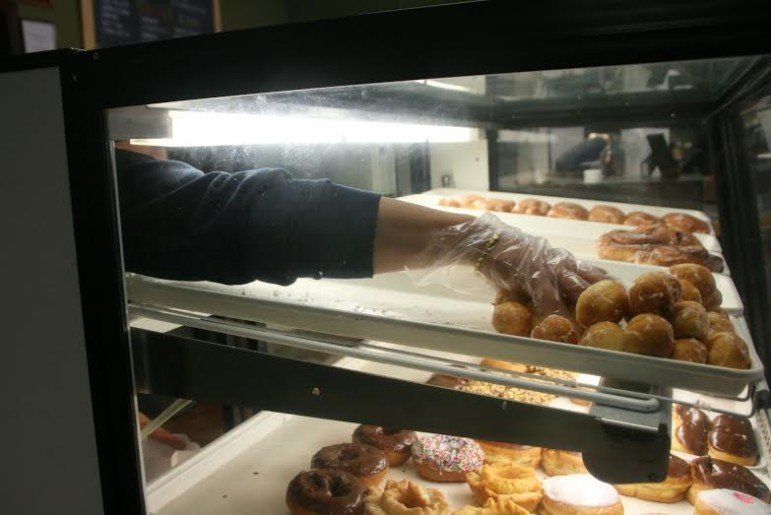 Nguyen thinks the Green Line has brought other problems to businesses directly on University Ave. “We got robbed twice in the last two weeks,” he said. “The first one, a former customer who used to live in the neighborhood came in, grabbed the tip jar and ran.”

The second robber came in, grabbed some money, cell phones and a bankcard before jumping on a Green Line train. “The light rail is easy to jump on and off of. A bus driver will call it in, but on the light rail, no one knows.”

There were other problems. His landlord nearly doubled the rent, anticipating that the light rail would make the properties along light rail more in demand. That’s when Nguyen started of contemplating his business options.

“I am thinking of moving,” he said. “Wherever they have a kitchen. Just last week, I looked at a nearby store front, but they want so much money and my business couldn’t afford it.” He said he’d prefer a location not directly on the light rail line.

And, he’s considering building his own stand-alone building to house SugaRush, both wholesale and retail, but he has no desire to abandon the neighborhood. He said he’d like to relocate a few blocks away, near Dale and Minnehaha, maybe near a corner.

“I would like to have more than a coffee shop. Maybe sell sandwiches, too, with an outdoor patio – the whole nine yards,” he said. He’s looking to the city and to local non-profits to help with the move and the expansion. The Neighborhood Development Center helped during construction, with management advice and technical support.

You can find SugaRush located at 712 University Ave., a few blocks west of the Minnesota State Capitol, sharing a main door with Cycles for Change. They are open from 6:30 a.m. (7:00 weekends) until 3:30 p.m. (sometimes a little later.)