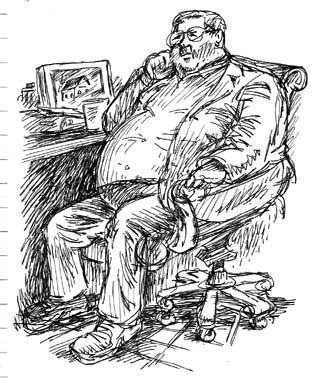 After seeing several days of videotape surveillance from federal prosecutors, a jury on Thursday convicted former Minneapolis City Council member Dean Zimmermann of accepting $7,200 in bribes from a Minneapolis developer. The jury took less than a day to find Zimmermann guilty on three of the four counts in the indictment.

The Green Party leader was indicted last January in the wake of an FBI corruption probe.

The trial lasted a week and a half and featured extensive undercover FBI audio and videotape of Zimmermann meeting with Gary Carlson, a local real estate developer – who sought Zimmermann’s help in changing the zoning of his commercial property.

Of particular note was a meeting between the two for a lunch of chicken wings and Barcardi cokes. Shortly after ordering food, Carlson slid an envelope across the table to Zimmermann – an envelope containing $5,000 in cash.

That exchange took place in the wake of a birthday party for Zimmermann, during which Carlson asked him how he could help. Zimmermann simply relied, “Money, money, money.”

Other highlights of the evidence against the Green council member included Carlson’s surprise that Zimmermann would want to attend a Republican fundraiser. Zimmermann replied, “Republicans, Democrats, Greens … What’s the difference? It’s all money.”

Later, while talking about his Democratic opponent in the race for reelection, Zimmermann remarked, “Lilligren has activists; we have money.”

The testimony also revealed that Zimmermann filed an additional candidacy under a fictitious name in order to force a three-way primary before the general election. It was unclear from the trial whether prosecutors intended to file additional charges against the Greens.