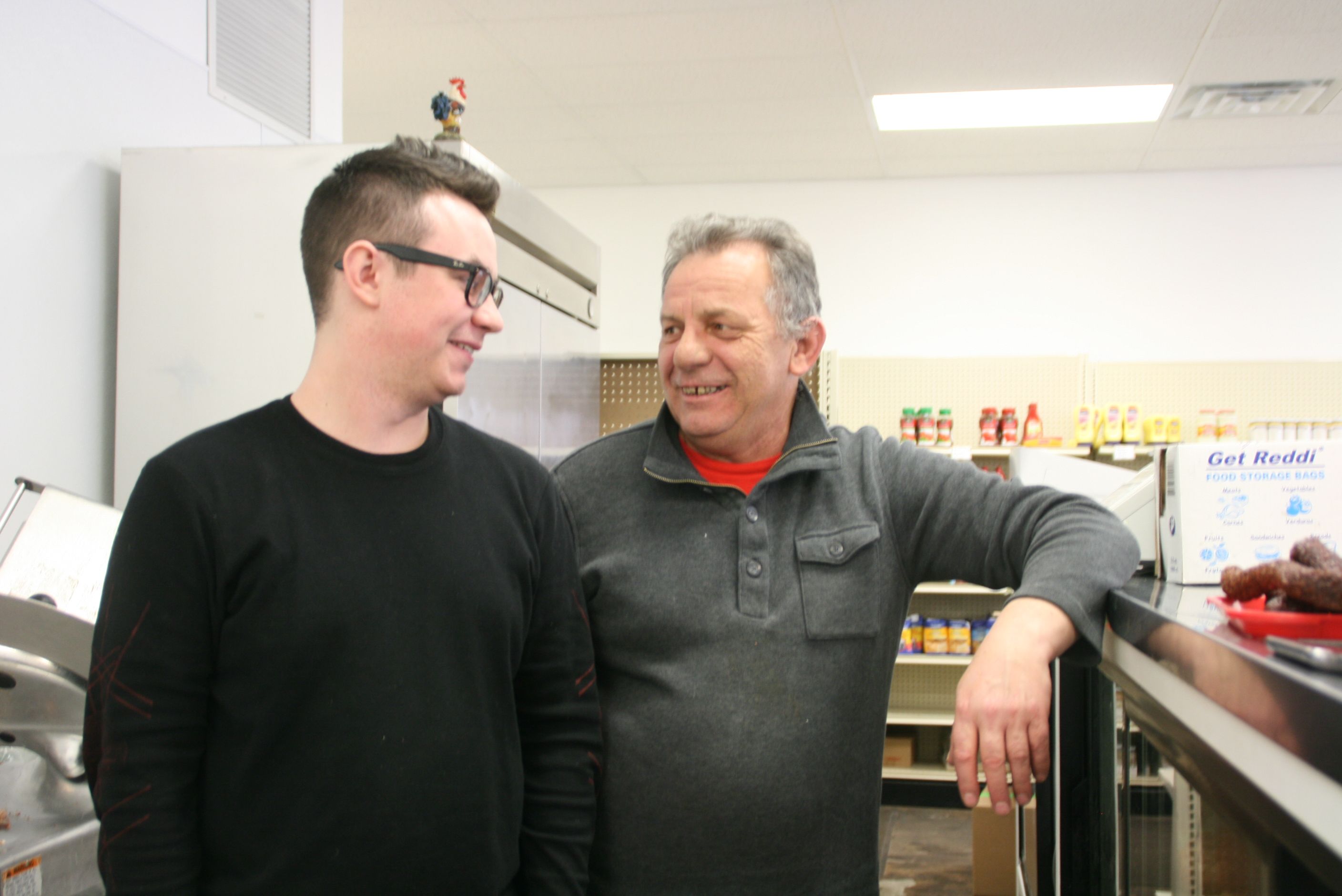 It’s a family operation, where son Tomek and his father Zbyszek, keep close. (All photos by Stephanie Fox)

It has been a generation since Northeast Minneapolis was a Polish enclave, but that didn’t stop the Ziach family from opening up an exclusively Polish grocery smack in the middle of what is now the city’s hip artist’s district. Ziach’s Food is almost an anachronism, an ethnic neighborhood market where there is no ethnic neighborhood. Nonetheless, since its first day in August 2011, multiple generations of Poles have found their way from new homes in the suburbs to the old neighborhood for a taste of the old world.

Every Tuesday through Thursday, family patriarch Zbyszek Ziach travels to Chicago to buy everything the store carries. Chicago, he says, is where all things Polish are. It’s best to come on a Friday, or they may run out of your favorites.

Zbyszek and eldest son Lukasz were born in Krakow, Poland, moving to the United States in 1989, after an extended stay in Greece. They ended up in Connecticut, where the youngest son, Tomek was born. Zbysyzek lost his job in 1995, when the shingle factory where he worked closed, and the family moved to the Twin Cities where a friend had gotten him a job.

“Dad’s had every manual labor job there is,” said Tomek.

The store had been their mother’s dream, but she never got to see it happen. After she passed away, and in her memory, they took the family life savings and opened the shop. 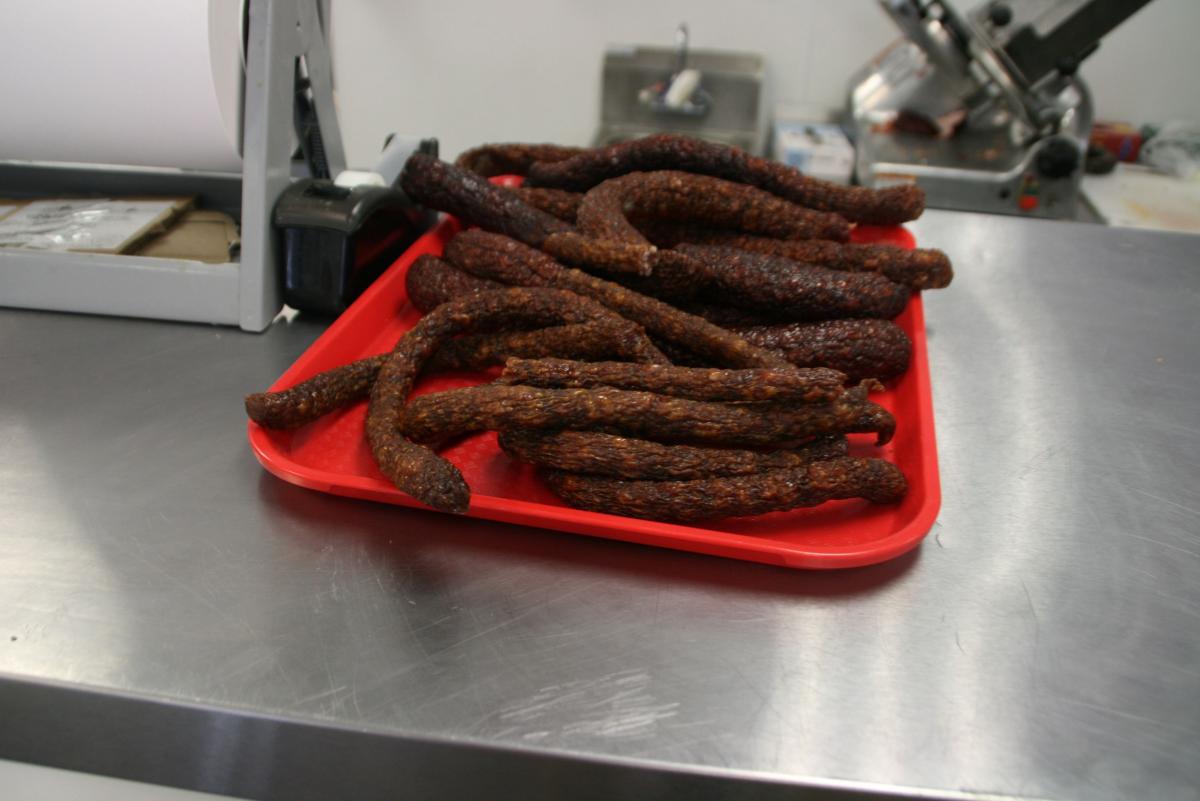 Polish food is its own universe. There are similarities to Russian and Ukrainian – a lot of their customers are from those countries – but there are differences, too. The Poles even have their own mayonnaise. (Tomek couldn’t tell me how the Polish version differed, because “I haven’t eaten American mayonnaise in years.”) The almost-familiar jar of Hellmann’s Babuni Majonez looks like American mayo, but is much lighter, sweeter and smoother. The main difference is that the Babuni has mustard and a little food starch, but no lemon juice. 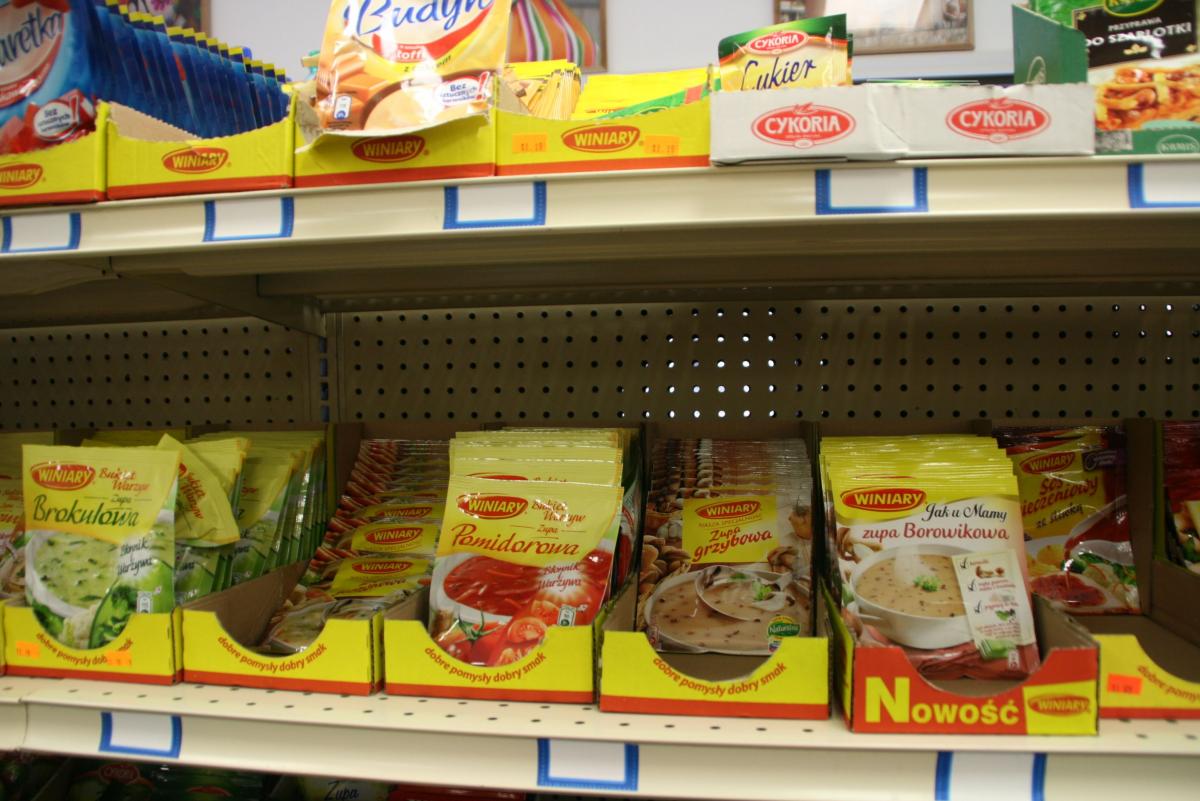 Dozens of instant soups, gravies, dressings and desserts have colorful packaging entirely in Polish. If you don’t read it, you can guess and experiment on how to make these.

The store has a large selection of instant foods in bright packages – dried soups, soups in jars, puddings, Jell-O like desserts, all with Polish labels and directions.

Some products, such as Old Polish Sour Soup, also known as zurek, have no directions at all. “It doesn’t need directions,” Tomek says. “Most people who don’t know what it is won’t want to eat it.” Zurek is a sour dough starter made from rye flour, and is the base of a traditional holiday soup (or a hangover cure.)

Packages of frozen Polish dumplings – pierogi, blintzes and the like – are all in English. There are 20 or so varieties, filled with everything from meat and sauerkraut to fruit, all ready to drop into pots of boiling water or fry in butter. 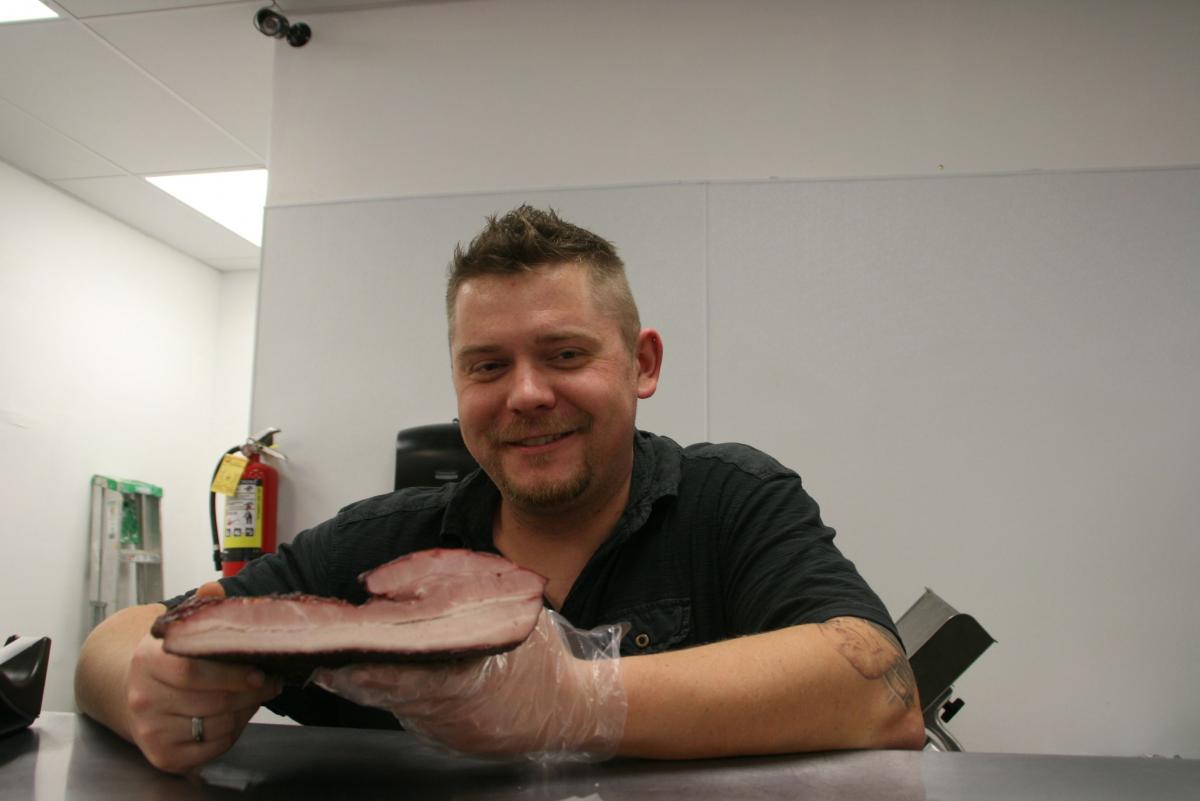 Lukasz, the eldest brother, runs the deli counter. Ask him if you want to taste any of his deli meat, and he’s happy to oblige.

And then there’s the deli meat counter, run by Lukasz.

“If you want to try something, just ask,” he said. “It’s better you try something and not buy it, than you buy it and find out you don’t like it.”

Almost everything is pork.

The most popular deli meat, he says as he cuts off a slice for me, is the karakowska, a sausage made with seasoned lean pork and served as a cold cut. Or, try the fatty, silky, garlicky Moscow ham or the slightly sweet smoky juniper sausage. “The Gypsy style bacon is like a good pork bar-b-que,” Lukasz says. “You don’t fry this one, it’s too lean.” 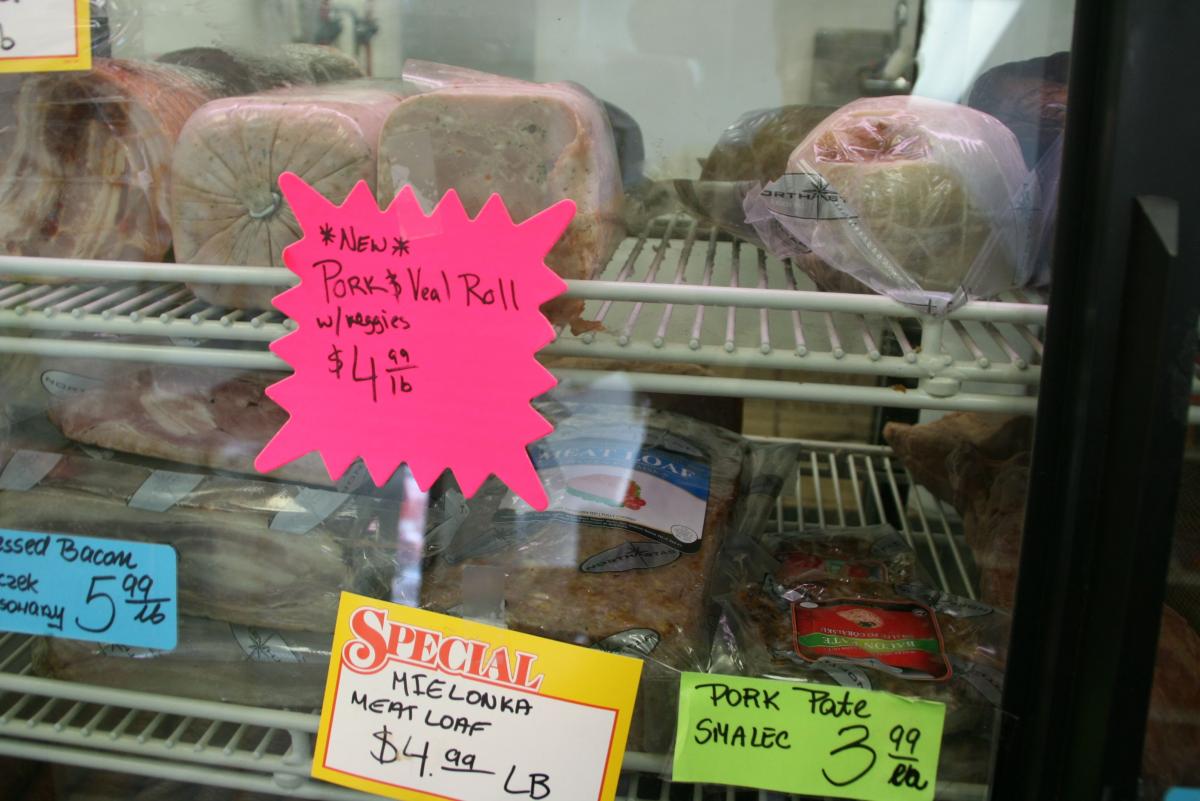 There’s a variety of deli meats from which to choose.

And then there’s the melt-in-your mouth headcheese. “I hate the stuff,” says Lukas, but customer Adam disagreed. “I love it,” Adam insisted. “I squeeze a little lemon juice on it. Delicious.”

The Ziachs have strong opinions on kielbasa, which they insisted are supposed to be coarsely ground and smoky. “The stuff they sell at Cub Foods aren’t kielbasa,” said Lukasz. “They’re hot dogs.”

Except for Zbyszek, who has a bit of an accent, all of the Ziach family, as well as Alina Jambor, who works the cash register, speak English like newscasters. With their customers, and often with each other, they shift into Polish, something that makes many of their older or newly arrived customers, comfortable and at home.

Ziach Polish Foods is located at 1625 Washington St. NE. in Minneapolis. Look for the big red sign with the large Polish eagle painted on it. (You can get Ziach Polish eagle hoodies there as well.)