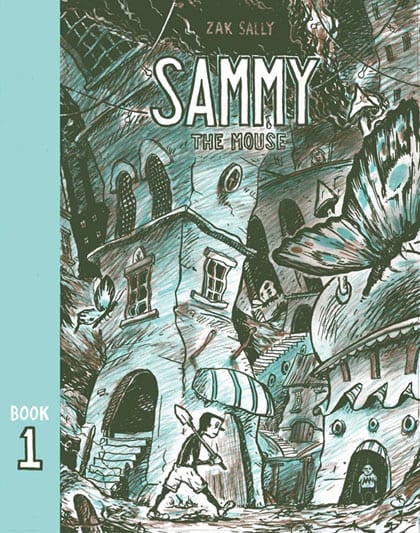 I remember working at a tiny, slummy little record store in Lancaster County, Pennsylvania located across the street from the Kunzler hot dog factory, listening to Low’s The Curtain Hits the Cast, never once, not even for a second, thinking I’d ever meet anyone in that band. And now here’s an interview I conducted with former Low bassist, current comic book author, illustrator, publisher—and now friend to my little family, Zak Sally. (Sally was my husband’s mentor while my husband was getting his MFA from MCAD.) The world moves us in strange ways.

All through last summer I heard tale of Sally’s DIY printing project—making a collection of the first three issues of his newest comic Sammy the Mouse on his very own offset printer, published through La Mano, and funded in part by a Kickstarter. There were troubles, and there were joys, but most of all (at least on my end) there was curiosity as to what the completed project would look like. Luckily, as of last week, I no longer have to wait.

Originally, the first three issues of Sammy were printed by Fantagraphics books as part of their Ignatz line—an attempt by the publisher to put out floppy comics with a more literary bent—which were over-sized and lovely. Now, Sammy the Mouse exists in a smaller (but longer) form, and is just a little bit lovelier.

Reading this first volume of Sammy the Mouse—which introduces the reader to Sammy’s weird world of anthropomorphic drunks who meet in a bar shaped like giant baby, a mysterious undertaking by Puppy Boy, and dark, interspersed panels from a yet-to-be-unveiled storyline—is as much a tactile experience as a mental one. I can’t believe I’m saying this, but I’m looking forward to the end of summer (already) so I can find out what the heck is going on in that weird, sick world Sally’s created. Sammy the Mouse, Volume 1 is available for purchase on the La Manos website, and locally at Magers & Quinn and Big Brain Comics.

What made you decide to do the reprint/trade by hand and in your own home? Did the project displace you at all?
Do you mean in my home or in my brain? My home, no—I have a garage-sized studio away from home that houses my comic studio as well as the printing press and all the warehousing for the other La Mano books. So it was all pretty well contained within that space. As far as my brain, absolutely. Printing this thing was one of the most frustrating, arduous undertakings I’ve ever…undertaken.

Will you be doing this for other books (yours and those of others)?
Probably. I’m not sure that I’ll do all of the next volume, but I’m so in love with the hand-made quality of it that at least some of them will be done on my press. And, I’m not really shopping myself as a “real” printer, but I am taking on some jobs with friends and such…maybe someday I’ll really fire up the press as a resource/way to make money/spend time, but right now there’s too many comics and various other things I’m angling to get done.

Would you mind talking a little bit about your switch from making music in Low to making comics? Have you always been into comics, or was music a first love?
Comics kind of trumps everything: predates my entry into music (which pretty much began with…all that stuff they write about in Our Band Could Be Your Life….). It’s probably been the single most consistent thing in my life—my love of comics and my desire to make them. I’d be lying if I said that the transition from Low to comics was an easy one…we’d built a solid audience by the time I left, and going from that to comics was…very abrupt and sobering. I had in no way expected that comics would match that audience; I just thought that there would be a lot more crossover interest between the two. Like, a couple percentage points—”he was involved in this interesting thing, now he’s involved in this other interesting thing.” As it turned out, that isn’t the case. No sob story there, just reality I guess.

Ten years ago did you have any inkling that you’d be doing this sort of project?
It feels a little goofy to say that this feels like the undeniable, logical conclusion to every damn thing I’ve ever done in my life, but that’s what I’m saying anyway. I don’t think any of it was premeditated or calculated, just one idea leading to the next; zines to music to self-publishing…it just seems like me following the things I love to this spot. It’s a strange spot to be in at times because in a certain sense there’s nobody sharing this specific spot with me, what with the printing and all, but…for all the worry and heartache, I’m really proud of all of it.

Were you worried you might get sued by Disney for Sammy the Mouse?
I was worried about that initially, particularly when issue #1 came out and people were responding to it as a pastiche or a “postmodern take” on the Disney characters; it is and never was intended as such, but Disney is notoriously litigious and when a corporation that sizeable comes after you you’re pretty well hosed. Thankfully (I guess?) Sammy is nowhere near popular enough to register on their radar. But even barring that, if they ever did come at me I’d like to think I’d fight them ‘till my dying breath; they did not invent “funny animals”, and Sammy is not using their stuff, period. It really pisses me off that companies like them can and do spend untold billions of dollars to make sure their characters are totally ubiquitous, deeply inserted into the public consciousness, but any manifestation of that idea, no matter how tangentially related, in any form is subject to them descending like vultures.

How does the comic industry differ from the music industry?
Well, there’s more fame, money, adulation, respect and instant gratification in the music industry. In the comics world there is none. So there’s that.  And your potential audience with music is 100,000 times larger—and it seems in the case of the kind of comics I do, it’s a million times larger.. But it’s also full of shit and features it’s own sad brand of “youth culture” and “coolness” as currency. Of course, the comics world is probably worse, with the wish-fulfillment/ power fantasy thing, but…what was I talking about again? They are both great. No, really; all the above may be somewhat true, but you can say that of any field, arts related or not; you just have to find the good stuff and the good people—and in both comics and music, I’ve been pretty lucky, as I’ve found both.

Do you hope your kids like comics? And if so, what kinds of comics do you hope they read (besides yours)?
I read my kids comics all the time—they do like comics. I mean, what sane person doesn’t? My boy Isaac reads way beyond his kindergarten level, and both reading to him as well as having these things around for him to read…he loves them. We love reading them together. It’s how I learned to read, as well. And, they can’t read Sammy yet. Too much swearing. There’s nowhere near as many comics for kids as there ought to be, but I’ve got a hell of a library for him to go through (Flossie too of course, but she’s only two, so it’s further off for her). And I’m trying to put something together for him, but for kids as well. It’s about the tooth fairy, of course.

How awesome are you feeling now that this project is complete?
Kind of awesome. I’m a bit too buried in the day-to-day trials and tribulations of being a micro-publisher in a rotten economy to be able to see it as clearly as I’d like…but, like I said; I’m very proud of what I tried to do here. Very proud. It just takes a bit of work to feel that way. I love what I do, and it feels important to me, in some small way.

What’s next?
Finishing the next volume of Sammy…96 pages, same format as volume 1. It’s well on its way, hopefully the bulk of it completed by end of this summer. And, some other projects. Too many projects, probably. Got some more songs I’d like to record, and…yeah, too much. Being bored is not a problem I have, ever.