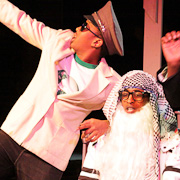 There are 984 youth living in Riverside Plaza, according to property manager Mimi Gibson.  To serve the enormous number of children, many from immigrant communities, a number of organizations provide programming for children from birth  through high school.  Some organizations, such as Brian Coyle Community Center, have offered  programs for a long time (although they have recently restructured their programming), while others have recently begun.

The Cedar Riverside Community School (CRCS) was founded in 1993 with the fiscal sponsorship from the West Bank CDC.

According to a Star Tribune article published in July, CRCS did better in math than any other high-poverty school in Minnesota, with three-quarters of the students displaying proficiency in state math tests and nearly 60 percent showing proficiency in state reading tests.  In the article, Principal Ricky White attributed the school’s success to the strong relationships with parents, with 100 percent attendance at conferences and parent meetings.  “We don’t just talk about the field trips we’re going on, we speak in depth in regards to what we’re doing in math, what we’re doing in reading, here are things you can help your children do, and if you can’t come see us, we’ll help you through it,” White was quoted saying.

Starting this year, the Riverside Plaza Tenants Association (RPTA) will be able to use space at CRCS, in addition to RPTA’s programs in the Plaza’s community rooms.  Space is a huge issue for programming because there are so many kids, according to Fredda Scobey from RPTA.

RPTA also provides a Somali culture class on Friday nights and Saturday afternoons in one of the community rooms in the plaza.  Students learn about Somali culture, and learn to read the Koran.  “Kids just love it,” Scobey said, although with the recent renovations, all of the prayer rugs had to be thrown away because there were bugs infesting them.

Also providing youth programming in the plaza is the East African Women’s Center (EAWC), a Confederation of Somali Community program.

In EAWC, the programming is focused on family literacy, with programming offered to those who live in the complex itself as well as families in the surrounding neighborhood. The Center offers childcare and school readiness in conjunction with ELL classes for parents.  The school readiness program—for children six weeks to five years—is offered for three hours a day for four days while parents are in class. On the fifth day, the parents and children take class together.

“It’s a culturally specific program teaching refugee women how to be their children’s first teacher,” said Doroth Mayer from EAWC.  Basically, mothers are taught about what the children are learning in the childcare room and how to replicate that in their homes.

The EAWC is starting to offer a program for girls 5-10 years old.  The after school program on Tuesdays, Wednesdays, and Thursdays starts when school is over and goes until about 5 or 5:30, with a field trip scheduled every other week.  Mayer said the Children’s Museum in particular has been very supportive of the field trip program, giving family memberships to all the moms.

While EAWC does offer volunteer opportunities for older girls, their focus is on the very young.  “So often when we talk about youth, we think 12-20 year olds who are in trouble,” Mayer said.  “We believe the more we can do when they are little, the more likely they are to succeed later on … our emphasis is on prevention instead of after a crisis has happened.”

Due to limited funding, EAWC operates only half time, serving around 40-45 families.  They invested $65,000 into renovating the space, Mayer said, which was “more than I thought we would have to.”

Programs Occurring Outside the Plaza in the Cedar Riverside Area

While there are no boys in the EAWC program, there are some girls in the programs run by the Confederation of Somali Communities (CSC), which operates in a number of different spaces including the Riverside People’s Center.  CSC offers a homework help program, a program for troubled and truancy Somali youth, a leadership program held once a month, basketball and other sports, a storytelling program, and a program designed for homeless youth.

Across the street from the Cedar Riverside Plaza, Brian Coyle, a Pillsbury United Communities Neighborhood Center, offers after school programs for all ages of children from kindergarten through high school.  Focusing on the values of learning, working, thriving, connecting, leading and contributing, the programs stress personal and social responsibility, according to Academic and Arts Coordinator Angel Peluso.  There’s homework help and activity time that includes things such as computer lab time, technology time, gym and healthy bodies time, healthy cooking and violence/drug prevention.

The middle school program, called Action Crew, encourages the youth to have positive attitudes toward adult careers, and includes mentorships using screened volunteers, mostly coming from the University of Minnesota and Augsburg.  The high school program, called Furthering Achievement Through a Network of Support (FANS), helps students be prepared to graduate and plan for a career or college.   High school students take workshops and classes about college readiness, financial aid, A.C.T. prep, etc.

The Action Crew and the FANS program also include a volunteer element, with  students taking on service projects, which the students decide upon themselves. Last year, the FANS participated in Global Youth Service day in April, and made a video called Cedar Riverside In and Out, where they interviewed people in the neighborhood.  It was aimed at combating stereotypes.  They showed the video at Bedlam and had a peace march around the neighborhood.  The middle school students had a Smoke Out, where the youth would get family and neighbors to sign pledges to either stay away from tobacco or quit for one day.  The Action Crew also volunteered at Caring and Sharing Hands.

After six o’clock, Brian Coyle starts its after-hours program, which goes until eight p.m.  There’s an open teen center for sixth graders and up, with extended homework help.

Peluso said most of the youth in Brian Coyle’s programs are from Riverside Plaza, although they are not from one ethnic group.

“Our biggest challenge is the need,” Peluso said.  “There are so many youth that need help.  Our program doesn’t have enough funding to support as many kids as we need.”  In addition to staff, there are about 8-10 work-study students, and about 30-40 volunteers, who include some parents.

One evening every week, Brian Coyle partners with the Bedlam‘s Cedar Riverside Art Zone for Youth (CRAZY) program,  a theater program for young people.  Last summer, students in the CRAZY program performed their play,  Aniga Aniga (Me and You), which was directed by Bedlam director John Francis Bueche at the Fringe Festival.

Bedlam has been offering its theatre programs for young people of all ages for a number of years in collaboration with Brian Coyle and also the Children’s Home Society, another agency that moved out of Cedar Riverside Plaza this summer.

Although Bedlam no longer has its West Bank theatre, it plans to continue to work with youth in the neighborhood, and has partnered with Mixed Blood Theatre, which recently received a $191,608 Arts and Culture Heritage Fund from the Minnesota State Arts Board for their Neighborhood Engagement Initiatives.  Bedlam also has other sources of funding for the program.

This spring, the two theatre companies will collaborate on a new Voices of Cedar Riverside play, which will feature youth actors from the neighborhood.

Scott Artley, from Mixed Blood, said that Mixed Blood has also hired four community liaisons (one high school student, two undergrads, and one graduate student) who are bilingual in English and Somali to facilitate outreach into the community.

“We have been working on being involved more in the neighborhood,” Artley said.  “A year and a half ago, we decided to ramp up our efforts.  What initially started as offering free tickets to the theatre has developed into encouraging participation at all levels of art making.”