North Minneapolis African-American teens have been working for the past six weeks on a project to develop their vision of West Broadway for the West Broadway Summer Design Institute.

This project, funded by Achieve Minneapolis, YouthPrise and the University of Minnesota is a part of the ongoing work to introduce students of color to design professions and to get them involved in the redevelopment of their community. The mission of the project is to change how communities of color are developed.

“If you look at North Minneapolis organizations, you would think there are a lot of opportunities for young people,” said Paul Bauknight, director of Community Renewal through Innovative Building (CRIB). “What I saw and heard through their eyes was there are not.”

“We got them to express what they thought about West Broadway and what the problems were,” said Bauknight. “They reported about gang violence, needing better jobs and schools. They visited Southside corridors as well to compare and contrast other areas and developments.”

Student, Capri Lee, who showed a preference for interior design, believes her generation should be more involved in neighborhood planning and design.

“They should let younger people contribute more, because we know the neighborhood and everything going on,” Lee said. 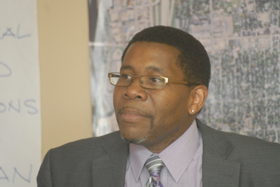 Bauknight (left) explained the importance of why professions such as design, urban planning, construction and architecture are platforms for the uplift of the community.

“First, we have to introduce them (North Minneapolis youths) to the profession, because most of them do not know an architect,” said Bauknight. “We do hands on projects in the neighborhood that they are familiar with to get them to see they can make a difference and bring the profession back home.”

Student participant James Pingrum said the program provided him the opportunity to not only get a summer job, but begin his studies in construction as well.

“This field is not as easy as people think. Your ideas get put in, and if they do not work, you keep trying and fix it. You have to listen to everyone’s opinion,” said Baker.

Martell Owens, another student in the program took interest in mechanics and interior design.

“A lot of times, architects only focus on the building and structure instead of how it affects the community,” Owens said.

Bauknight said there are not enough people of color in professions of architecture, planning and design.

“The history of urban redevelopment is that planning and development are usually done by outsiders, non-community members and mostly white men,” expressed Bauknight. “They are not anchored in the community and do not understand the social and cultural issues that go with what they do; whether it is policy, zoning, designing, architect, engineer or urban planning, very few engineers of color exist.”

Many believe that is what occurred with the Rondo Neighborhood in St Paul.

Bauknight said he wanted to be an architect since 6th grade, but did not meet an African-American architect until his junior year of college.

“Sometimes you need to see people who look like you and understand where you’re coming from, because you bring who you are to the project,” said Bauknight.

Because of their involvement with the program, many of the students plan on continuing in the urban development field, which excites Bauknight.

“Really my job is to guide and support (the student). It’s their vision,” said Bauknight. “We do not talk to the young people that much and it is important for them to have a voice and show them they have opportunities. The whole idea is to get young people to participate and make a difference.”